Israel and the conflicts in the Mediterranean Basin 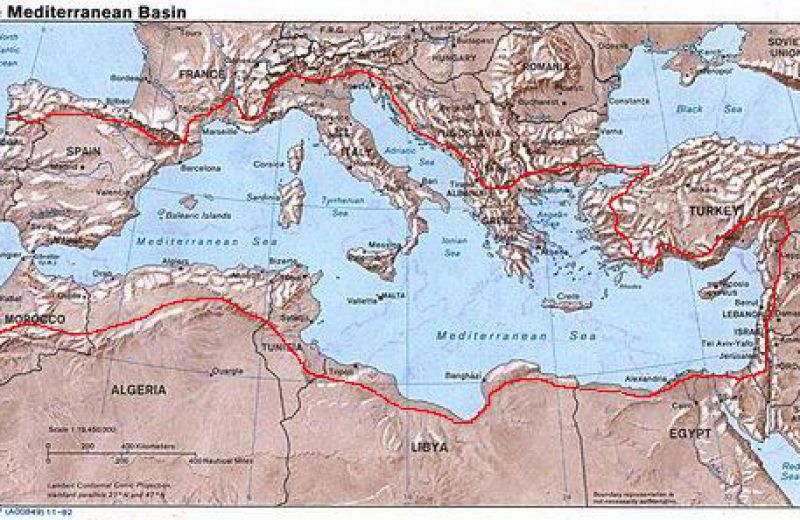 This paper focuses on the conflicts in the Eastern Mediterranean Basin and the optimal policies Israel should adopt in response. It is based on the main points raised at the seventh meeting of the research and policy group: “Israel in the Mediterranean” held on July 28, 2020 at the initiative of the Mitvim Institute, the Hebrew University’s Leonard Davis Institute for International Relations, and Haifa University’s National Security Studies Center. The paper briefly describes the nature of the conflicts in the Eastern Mediterranean Basin and examines Israel’s interests and relevant policy, the essence of which is to strive for stability, realize gas deposit profits, and expand regional cooperation in the Mediterranean. The paper does not reflect agreement among all session participants.

Multiple conflicts and players – Along with many cooperative ventures emerging in the Mediterranean Basin, many conflicts are also being waged – some prolonged and others relatively new, some violent and others diplomatic or economic in nature. The most prominent are the conflicts between Turkey, Greece and Cyprus; between Israel and the Palestinians; between Turkey and Egypt; between Israel and Lebanon; the Syrian civil war; and the multi-party war in Libya. Some of the conflicts have spread into other arenas (in terms of combatants, weapons, interests and alliances). In addition to the states directly involved, local groups are also involved, as are other states in the region, world powers, and global energy groups.

Turkey vis-à-vis the region – Turkey has found itself largely isolated in the Eastern Mediterranean Basin. It is engaged in conflicts with Greece over maritime border delineation, with Cyprus over demarcation of economic waters, as well as in the ongoing conflict in Northern Cyprus. It is at odds with Egypt against an ideological backdrop and competition over predominance as a regional energy hub. Tensions between Turkey and Israel have increased with the declining prospects of the proposed gas pipeline from Israel to Turkey and the strengthening of Israel’s ties with Egypt, Cyprus and Greece. Turkey is also involved in the Syrian civil war, where it is fighting primarily against Kurdish forces, and it has intervened in the Libyan civil war on the side of the Sarraj regime in Tripoli, with which it has even signed an agreement on maritime borders. The agreement infringes on Greece’s economic waters claims, generating broad opposition on the part of other states in the region. Turkey’s isolation is also reflected in its absence from the Eastern Mediterranean Gas Forum (EMGF). In order to ease its isolation and bolster its regional standing, Turkey has adopted an assertive strategy it dubs “the Blue Homeland”, using its maritime power and willingness to project military force to command attention to its maritime claims and regional interests. Given this state of affairs, the renewal of the peace process in Northern Cyprus does not appear to be at hand.

Syria and Lebanon – These states are focal points of regional instability and Iranian influence. Syria has deteriorated into a prolonged civil war with involvement of Iranian, Russian, Turkish and other forces in the region. The internal and regional migration flow prompted by the war is destabilizing the region beyond its borders. Hezbollah appears to be serving Iran’s interests rather than those of Lebanon. As a whole, Iran is deeply vested in turning Syria and Lebanon into a land bridge between itself and the Mediterranean. In addition, Lebanon, for its part, has also land and maritime border discords with Israel.

Energy as a source of cooperation and conflict – The natural gas deposits discovered in the Mediterranean are an important element in the cooperation among Israel, Egypt, Cyprus and Greece. In the not-so-distant past, cooperation between Israel and Turkey also rested on energy cooperation potential. The establishment of the EMGF in Cairo in early 2019 is a clear example of how energy can advance cooperation. The gas export agreements between Israel and Egypt and Israel and Jordan are another example. Nonetheless, energy is also at the heart of many conflicts. It is a key element in the conflict between Turkey and Cyprus over their maritime border demarcation, it is an additional irritant in the competition between Turkey and Egypt over their role as regional energy hubs, and it is key in Libya, where local and regional players and world powers are fighting for access to oil resources.

The expression of the global power balance and conflict in the Eastern Mediterranean – The American decision to limit its presence in the Mediterranean Basin region, as expressed in the drawdown of the Sixth Fleet, creates a vacuum being filled by other players. Russia is enjoying the US withdrawal and expanding its activity and influence in the region, as is the Turkish fleet, which enjoys greater freedom to maneuver. The US pullback from the region is accompanied by its distancing from Turkey, resulting in growing tensions between Turkey and NATO and Turkish-Russian rapprochement. This is particularly obvious in weapons deals that Turkey is promoting and in the issue of its involvement in NATO defense projects. In Libya, on the other hand, Turkey and Russia are on opposite sides of the divide. The conflicts in the Mediterranean challenge European consensus, as various European states have different interests concerning the conflicts in the Mediterranean Basin. French interests, for example, are opposed to those of Italy in the Libyan arena and vis-à-vis Turkey. Germany, given its centrality in the European Union and its ties with Turkey, is promoting arbitration measures among Turkey, Greece and Cyprus.

Israel as a stabilizing element in the Mediterranean Basin – Israel has an interest in stability and cooperation in the Eastern Mediterranean Basin. Therefore, wherever it can help settle conflicts and mediate between rivals, it should do so based on its experience from the conflicts in which it was involved itself. Israel should diversify its regional relationships, establish ties with as many players as possible, and expand its fields of cooperation. Israel should also cooperate with regional institutions and organizations – on the governmental and civil society levels – to help promote their activities and encourage them to be as inclusive as possible.

Israel cannot remain impartial. It must stand by its closest allies – In dealing with the Syrian civil war, Iranian entrenchment, and instability in Lebanon, one of Israel’s greatest assets is its ability to conduct discourse and dialogues with Russia and China. Both these powers are deepening their involvement in these countries and Israel should mobilize their help to protect its interests. Israel should also strive to improve its relations with Turkey, without endangering the interests of its main allies in the region – Cyprus, Greece and Egypt. But, along with the desire to maintain a non-exclusive policy and distance itself from the conflicts to the extent possible, Israel must stand by its close allies and look out for its own interests in the tangle of conflicts. It must support Egypt as an important strategic ally as well as Greece and Cyprus, with which it maintains and develops a close relationship. Israel must not accept the Turkish demarcation of a maritime border with Libya.

Continued mobilizing energy to promote regional cooperation – The potential that lies in the natural gas deposits in Israel’s exclusive economic zone is declining given the current energy crisis, market conditions, and existing alternatives. Israel has a surplus production capacity for the local market, and the entry of the Tanin and Karish gas fields into the market, now delayed to the last quarter of 2021, raises additional doubts about the economic viability of the drilling. At the same time, this provides additional gas export opportunities. There are also increasing question marks over the profitability of the EastMed pipeline from Israel to Europe. For now, Israel should keep alive the gas pipeline idea to bolster ties with Cyprus, Greece, and possibly Italy. The coronavirus and its attendant energy crisis have also affected the EMGF, but the forum continues to hold great potential for strengthening regional cooperation. Israel must promote the expansion of the forum to include the foreign ministers of the participating states and not just their energy ministers, and to focus on energy issues in general, not just natural gas, with an emphasis on renewable energy. In any case, Israel must prepare to shift to renewables and take advantage of its gas reserves for the exports of advanced products (hydrogen, for example).

Harnessing stabilizing elements from outside the region – Israel’s special relationship with the US is one of its key assets. These relations boost Israel’s regional power, and it can use them to help its allies in the region. Israel should encourage the US to maintain its presence in the region. To that end, it should nurture bipartisan ties with the US, considering the possible entry of a Democrat into the White House in January 2021. Additional states with which Israel should cooperate in the region are France, which supports Greece and Cyprus in their conflict with Turkey, and Germany so that Israel able to promote regional dialogue and achieve agreements. Israel can and should cooperate with additional international elements that seek to stabilize the region or that have the potential to do so.

Mediterranean Basin
Prev
All Publications
Next