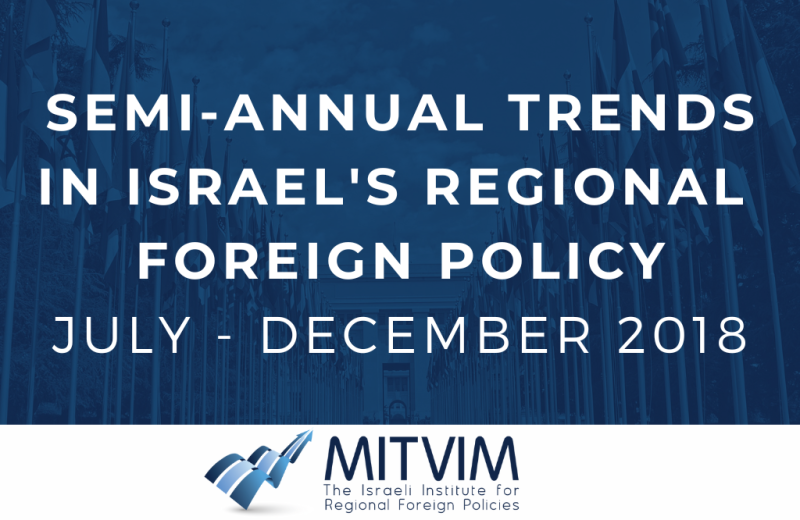 This document briefly outlines major trends in Israel’s regional foreign policies over the past six months. It is based on the Mitvim Institute’s monthly reports that cover ongoing developments in the Israeli-Palestinian peace process/conflict, Israel’s relations with the Middle East, Europe and the Mediterranean, and the conduct of Israel’s Foreign Service.

1. Supporting international efforts to prevent war in Gaza. Israel and Hamas were once again on the brink of war. Israel chose to avoid another round of warfare in Gaza and to help prevent a greater humanitarian crisis there. It held indirect talks with Hamas, supported Egyptian and UN mediation efforts, and encouraged Qatar to transfer funds and fuel to Gaza. In parallel, Israel worked to prevent international recognition of Hamas and to maintain the split between the West Bank and Gaza.

2. Efforts to postpone the publication of the US peace plan. Israel made efforts to delay the announcement of Trump’s peace plan, while trying to influence its content. For the first time, an Israeli minister publicly criticized the plan. Israel did not take steps to advance the peace process. It maintained security and economic coordination with the Palestinian Authority, but also advanced legislative measures and settlements’ construction that go against the two state solution.

3. Unsuccessful attempts to relocate additional embassies to Jerusalem. Israel lobbied  various countries to encourage them to relocate their embassies from Tel Aviv to Jerusalem (as was already done by the US and Guatemala). These efforts did not yield results. They led Australia to declare that west Jerusalem is the capital of Israel, and the Czech Republic to open a cultural center in Jerusalem. On the other hand, Paraguay withdrew its embassy from Jerusalem, shortly after moving it there.

4. Increased cooperation with Egypt and new tensions with Jordan. Israel and Egypt stepped up their cooperation on Gaza, natural gas, and the war against terror. This led to an improvement in bilateral relations, which was made evident through positive public engagement between the countries, including between Netanyahu and a-Sisi. At the same time, Jordan’s decision not to renew the lease to Israel of lands in Naharayim and Tzofar created new tensions between the countries. Israel tried to ease these tensions by advancing water projects that are of interest to Jordan.

5. Visits by Israeli officials to the Gulf and support to the Saudi regime. Netanyahu publicly visited Oman and several Israeli ministers participated in international forums that convened in Gulf states. In addition, several positive statements were made by Gulf states towards Israel. This coincides with signs of warming ties between Israel and Saudi Arabia, which led Netanyahu to back the Saudi regime following the Khashoggi murder. These developments are influenced by joint interests against Iran and by coordination with the US administration.

6. Attempts to overcome tensions with Russia and continued action in Syria. The downing of a Russian plane in Syria led to tensions between Israel and Russia. Israel pursued Putin and conducted contacts with Russia in order to restore the coordination mechanism that enables Israel to act against Iranian and Hezbollah targets in Syria. This has become more acute for Israeli given the transfer of advanced Russian anti-aircraft missiles to Syria, the announced US withdrawal from Syria, and efforts by Hezbollah to transfer weapons from Syria to Lebanon.

7. Criticizing the EU and encouraging the split between its member states. The Israeli government has been increasingly criticizing the EU. It described the EU as a foe to Israel, and accused it of funding organizations that support terror and boycotts. Israel continued to developed alliances with central and eastern Europe countries, in order to weaken the EU’s capacity to reach decisions and take action on issues related to the Israeli-Palestinian conflict. In parallel, Israel continued to develop its ties with the EU in various areas, and even signed additional agreements with it.

8. Weakening the democratic component in Israel’s foreign relations. The Israeli government drew closer to several non-democratic leaders around the world and far-right figures in Europe, tightened restrictions on entry into Israel, delegitimized criticism of its policy toward the Palestinians by labelling at as anti-Semitism or as part of the anti-Israel boycott movement, and passed the harshly criticized Nation State Bill. Undermining Israel’s liberal and democratic values has created a growing rift between the Israeli government and Jewish communities in the US and Europe.

9. Strengthening ties with Greece and Cyprus, while tensions mount with Turkey. The tripartite Israel-Greece-Cyprus alliance continues to strengthen through meetings between heads of state and parliamentarians, signing new agreements, advancing a joint gas pipeline to Europe, and cooperation on security, diplomatic, diaspora, environmental, and cultural affairs. In parallel, the crisis between Israel and Turkey, sparked by harsh Turkish criticism of Israeli actions in Gaza and Jerusalem, has not been resolved. It even deepened after anotherround of verbal skirmishes between Erdoğan and Netanyahu towards the end of the year.

10.Diversifying foreign policy by pursuing ties in Asia and Africa. Israel has made efforts to deepen ties with Asia and Africa, due to their growing global influence. It promoted economic relations with East Asian countries by signing new agreements, opening up development hubs and holding high-level visits. Special emphasis was placed on promoting relations with China, despite a growing recognition that this poses strategic challenges. In Africa, Israel worked to renew diplomatic ties with Chad and Sudan. This goal was not yet achieved despite the progress made.

11. Budget cuts and the lack of a minister further weaken the Foreign Ministry. The status of Israel’s Foreign Ministry continued to be weak. It was eroded even further due to an announcement of additional budget cuts and the lack of implementation of wage agreements reached with the Finance Ministry. Foreign Ministry employees tried to publicize the diplomatic implications of these steps, but have not yet succeeded in changing this decision. Moreover, Netanyahu did not yet appoint a full-time foreign minister, despite promises to do so following the resignation of his defense minister in November.