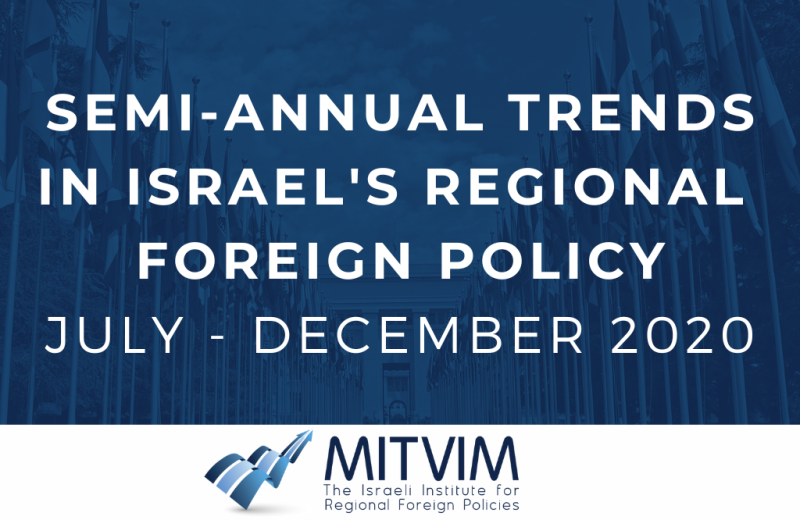 This document presents key trends in Israel’s regional foreign policies in the July-December 2020 period: Establishing diplomatic ties with the UAE, Bahrain and Morocco; advancing normalization with additional Arab states, but not with Egypt and Jordan; freezing formal annexation but continuing a creeping annexation; capitalizing on US elections to advance diplomatic interests; bolstering cooperation in the Eastern Mediterranean along with cautious involvement in regional conflicts; leveraging natural gas reservoirs in the Mediterranean for diplomatic benefits; leading diplomatic efforts to forge a regional and international front against Iran; adopting a more positive approach to the EU despite disagreements on the Palestinian issue; empowering Israel’s Ministry of Foreign Affairs’ (MFA) in terms of professionalism, policy influence and public image.

1. Establishing diplomatic ties with the UAE, Bahrain and Morocco – Israel forged diplomatic relations with the UAE, Bahrain and Morocco and announced progress in normalization with Sudan. These moves were underpinned by US encouragement and support, as expressed in significant defense, diplomatic and economic benefits for the participating Arab states. The formal relations led to advancement of agreements and cooperation in a wide array of fields, with official delegations conducting mutual visits. Attempts were made to harness Saudi participation in the normalization wave, including a reported trilateral meeting between Netanyahu, Bin Salman and Pompeo.

2. Advancing normalization with new Arab states, but not with Egypt and Jordan – The agreements with the UAE and Bahrain prompted a flourishing of security, economic and civilian cooperation encouraged and promoted by the governments. Direct flights were launched between Israel, the UAE and Bahrain, with Saudi approval to overfly its air space, and maritime trade routes were advanced. Israel and the UAE reacted with enthusiasm to the new relationship, as reflected in the agreement on mutual visa exemptions and the visit of tens of thousands of Israelis to the UAE. The advancement of normalization with Gulf states was particularly pronounced compared to the ongoing freeze in Israel’s civilian relations with Egypt and Jordan.

3. Freezing formal annexation but continuing a creeping annexation – Under international and local political pressure, and the conditions set by the UAE for normalization, Netanyahu announced a freeze of his West Bank annexation intentions. Nonetheless, his government continued to move ahead with de facto annexation, without formal declarations, including construction plans in East Jerusalem and the settlements, along with demolitions of Palestinian homes in Area C, special funding transfers to the settlements and Knesset initiatives to legalize outposts.

4. Capitalizing on US elections to advance diplomatic interests – Ahead of the US presidential elections, Israel took advantage of the Trump Administration’s desire to display foreign policy achievements in order to promote normalization agreements with Arab states, despite the absence of progress in the peace process with the Palestinians. Following Biden’s victory, Israel sought to capitalize on Trump’s final days in office to promote US recognition of the legality of the settlements. The election results also prompted the Palestinian Authority to resume security and civilian coordination with Israel. Israel’s preparations for the Biden administration focused on the Iranian issue in light of an expected US intention to resume negotiations with Iran on the nuclear agreement.

5. Bolstering cooperation in the Eastern Mediterranean along with cautious involvement in regional conflicts – Israel has strengthened its alliance with Greece and Cyprus, especially in the fields of security, energy, health and tourism, and accepted a Cypriot initiative to form a trilateral secretariat of the alliance in Nicosia. Israel backed Greece and Cyprus in their maritime border disputes with Turkey, but did so cautiously. It wanted to avoid being dragged into a conflict to which it is not a side and not to exacerbate relations with Turkey, also given recent signals of Ankara’s interest in warmer ties.

6. Leveraging natural gas reservoirs in the Mediterranean for diplomatic benefits – Israel took advantage of its energy resources and geopolitical location to advance regional cooperation. It promoted, in cooperation with Egypyt the formalization of the Eastern Mediterranean Gas Forum as a recognized international organization, and ratified its foundation charter. Israel also entered US-mediated negotiations with Lebanon on marking the maritime border between the two states. It approved the plan for a gas pipeline to Europe via Cyprus and Greece, and advanced cooperation with the UAE on conveying energy through the Eilat-Ashkelon pipeline.

7. Leading diplomatic efforts to forge a regional and international front against Iran – Israel continued its military activity against Iranian and Hezbollah forces in Syria, in coordination with Russia, and its diplomatic activity against the nuclear agreement and in favor of broader sanctions on Iran, in cooperation with the US. The Israeli MFA’s efforts affected decisions by additional states to label Hezbollah a terrorist organization. Opposition to Iran played a significant role in bolstering Israel’s relationship with Gulf states and in Israel’s decision to supply arms to Azerbaijan as part of the conflict in Nagorno-Karabakh.

8. Adopting a more positive approach toward the EU despite disagreements on the Palestinian issue – The EU harshly condemned Netanyahu’s planned West Bank annexation intentions and expanded Israeli construction in the settlements and East Jerusalem. Foreign Minister Gabi Ashkenazi adopted a positive attitude toward the EU and underlined the importance of improved ties with it. He participated in an unofficial meeting of the EU’s Foreign Affairs Council, and advanced ties with his European counterparts. Nonetheless, attempts to reconvene the Israel-EU Association Council have yet to bear fruit. Israel’s ties with populist, a-liberal leaders in Central and Eastern Europe were sidelined, contrary to Netanyahu’s boasting of these relationships in previous years.

9. Empowering Israel’s MFA in terms of its professionalism, policy influence and public image – The MFA instituted new working procedures and promoted dozens of professional appointments, some of which are still awaiting government confirmation. Foreign Minister Ashkenazi sought to ensure the participation of MFA representatives in all relevant government forums, and to strengthen coordination with other government ministries. The MFA also intensified its media exposure efforts, including spotlighting its contribution to the promotion of relation with Arab states against the backdrop of the Abraham Accords. The MFA stepped up its recruitment efforts, resulting in higher enrollment than in previous years for its cadet training and making the upcoming cadet course the biggest in recent years.