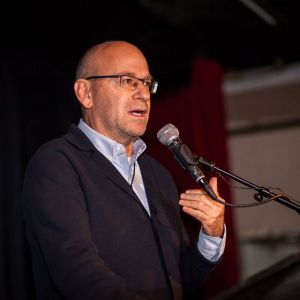 all posts by Nadav Tamir

Nadav Tamir is the Executive Director of JStreet Israel. He has dedicated his career to public service, joining the Israeli Foreign Ministry in 1993 and serving in multiple roles, including Political Officer at the Israeli Embassy in Washington, DC. In 2006, he was named Israeli Consul General to New England, a position he held until 2010. Upon returning to Israel, he joined the Policy Planning Unit of the Israeli Foreign Ministry where he served until accepting the position of senior adviser to President Shimon Peres. Nadav is an adviser for international affairs at the Peres Center for Peace and Innovation, and a member of the steering committee of the Geneva Initiative.

Nadav earned his MA from the Harvard Kennedy School of Government as a Wexner fellow and his BA in philosophy and political science from the Hebrew University. He currently resides in Givatayim with his wife, Dr. Ronit Tamir, and three children.