A hunchback who doesn’t see the enormous hump on his back: extreme right accuses Palestinians of ‘settler-style’ activism and attacks EU 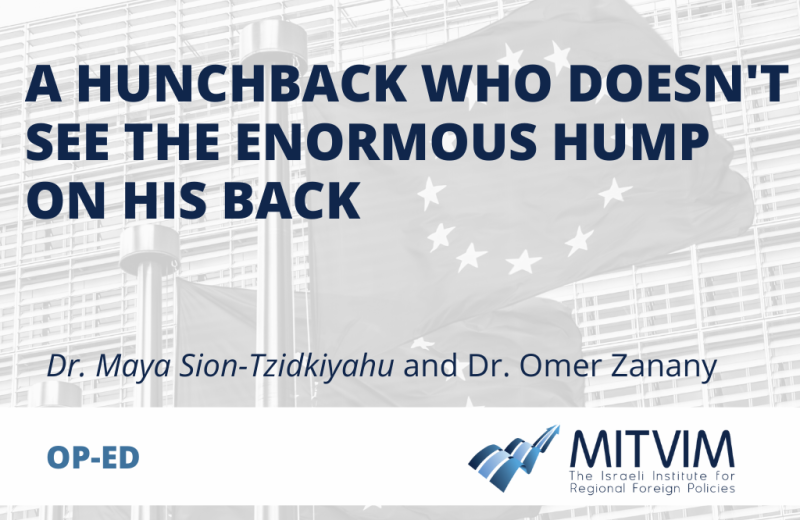 A classified document sets out a plan by the EU Delegation to the Palestinian Authority proposing joint development of Area C was recently leaked. According to Channel 13 correspondent, Moriah Asraf Wolberg, the plan is intended to help “expand Palestinian control of Area C.” The publication prompted belligerent reactions, which appear to be part of an ongoing orchestrated campaign by the right wing and the settlers. MK Struck labeled it “a subversive plan to establish a Palestinian state contrary to agreements and against the law.” Minister Smotrich argued that the EU was helping to establish “an Arab terrorist state in the heart of the Land of Israel, unilaterally.” The chairman of the Yesha (Judea and Samaria) Council, Shlomo Ne’eman, said that “the takeover of Area C is the greatest strategic threat in our region.” Right-wing MKs banded together and drafted a letter demanding that the EU “immediately cease illegal construction in Israeli sovereign territory”.

Area C constitutes 60% of the West Bank’s area. Contrary to right-wing claims, the territory is not under Israeli sovereignty, since Israel never annexed it. According to the Interim Agreement with the PLO (1995), the area, which was occupied in 1967, is under ‘temporary’ Israeli control, and with the exception of the areas left for negotiations on the permanent stage, most of Area C was to be handed over eventually to the Palestinians. As the parties did not reach a permanent agreement, this ongoing conflict has negative impact on developments in Area C. The PA, for example, cannot exercise the functional powers it was granted under the Interim Agreement, since Israel controls all movement, planning, and infrastructure in the territory.

Along with violence, terrorism, and crime, nature and the environment are severely damaged; Israel is torpedoing construction projects necessary for Palestinian living and livelihoods; and Palestinian are sometimes expelled from their homes and require international humanitarian assistance. The lack of coordination along a “zero-sum game” approach prevents construction and development according to a long-term spatial perspective, as the EU suggests.

Reviewing the EU Delegation’s proposal, illustrates the extent to which the Israeli claims are unfounded and motivated by political agenda. The EU’s vision has not changed in any way. Europeans have long supported the establishment of a viable Palestinian state, and have been trying for many years to provide humanitarian assistance to the isolated Palestinian population in Area C, which Israel abuses. The European vision is in fact in line with Israel’s long-term interest – to promote the two-state solution in order to ensure our existence as a safe, Jewish and democratic state. This differs deeply from the radical right’s agenda, which wants to demarcate and isolate Palestinian cities, to annex most of Area C to Israel, and to perpetuate a bloody conflict between the peoples.

Contrary to right-wing claims, the Delegations’ document adheres to the Oslo Accords and international law, and even recommends avoiding unilateral measures and implementing a non-confrontational approach to Israel (“Do No Harm”). This constructive approach falls on the deaf ears of politicians in the current right-wing government, who today see the PA and the international community as “enemies of Israel,” motivated by anti-Semitism to work against it. The document is also based on a professional approach of spatial planning and environmental sustainability (green energy and green economy). Instead of adopting this approach for coordinating European-funded humanitarian and development construction, Israel is taking unilateral divisive measures, expanding settlements deep within the territory, and demarcating extensive “military zones” at the expense of Palestinian living space, taking over land that is not theirs and harming the land and the population.

The extreme right’s claims of an “illegal” Palestinian takeover of “our” territories, accusing them of trying to delineate the borders of their state by stealing and defrauding the State of Israel is astonishing. Blaming the Palestinians for “settlement-style” activism is like a hunchback who doesn’t see the enormous hump on his back. The majority of the Palestinian population in the West Bank (approximately 3 million people) lives in densely populated areas A and B. Without Israeli approval, the PA cannot expand the residential areas. The PA’s requests for building permits in Area C are denied in most cases. Only 0.5% of the applications are approved by the Civil Administration. Thus, Palestinians are unable to cope with natural growth without so-called ‘illegal construction’. Since 1967, more than 460,000 Jews have moved to the Occupied Territories (not including the Jerusalem area). Settlement expansion at a dizzying pace leads to suffering for the approximately 260,000 Palestinians living in Area C, the destruction of structures and facilities, and the expulsion and confiscation of property, while Israel is the party violating international law.

The international community, including the EU, provides humanitarian and economic assistance for the development of the OPT, with Israeli approval and in accordance with the agreements. The right wing is reluctant to incite against other foreign elements (such as UN-Habitat, USAID) that also operate on the ground, under similar principles. Instead, they are treating the EU as a scapegoat.

Contrary to the right’s accusations, the EU’s Foreign Affairs Council has not yet voted to adopt the document on the development of Area C as an official decision. EU resolutions require unanimous consent by the Council, which includes representatives of the 27 member states and the European Foreign Service. Until it is accepted, this is a proposal, not an action plan.

The leak of the document has once again unleashed the far-right demon of anti-EU incitement. Right-wing politicians, especially those from the far right, are no strangers to spreading vicious anti-EU incitement. However, its volume and speed this time suggest a potential new low in relations between Israel and the EU under the sixth Netanyahu government, after relations had been greatly improved by concerted efforts of the previous government. The two agreements promoted by the Bennett and Lapid government, “Creative Europe” and the operational agreement with Europol have already stalled, and are unlikely to be advanced by the current government. The European Commission is also renewing its claim for financial compensation from Israel for the destruction of structures and facilities in Area C, damaging European taxpayer funds.

The excessive powers granted to Ministers Smotrich and Ben-Gvir over maintaining security and managing Palestinian civilian life in the West Bank make clear what we can expect from now on – violent provocations, tacit permission to aggravate attacks on Palestinians, particularly in Area C, and activities to promote the de-facto annexation of the territory to Israel. It is therefore difficult to expect a positive change in the attitude of this most right-wing government. On the other hand, engaging the EU in battle at the present time is liable to harm Israel’s interests, and might result in a broad “counter-coalition” vis-à-vis Israel. This even as the EU has demonstrated its interest in increasing its partnership with Israel against the backdrop of the Russo-Ukraine war, and in view of Israel’s energy and security assets. Prime Minister Netanyahu and incoming Foreign Minister Eli Cohen have a responsibility to prevent Area C from becoming a new focus of escalation and further damage to the PA’s ability to survive, while at the same time maintaining intact relations with the Europeans. In view of the current coalition makeup, they are expected to face a fierce containment battle even in meeting these basic goals.

Dr. Maya Sion-Tzidkiyahu is the Director of Israel-Europe Program at the Mitvim Institute, a lecturer at the European Forum, the Hebrew University and in the European Union Studies Program, Tel Aviv University.

Lt. Col. (res.) Dr. Omer Zanany is a lecturer on government and strategy at Reichman University. His books include “The Annapolis Process: An Oasis or a Fata Morgana” (2015) and “From Conflict Managing to a political settlement Managing” (2018).