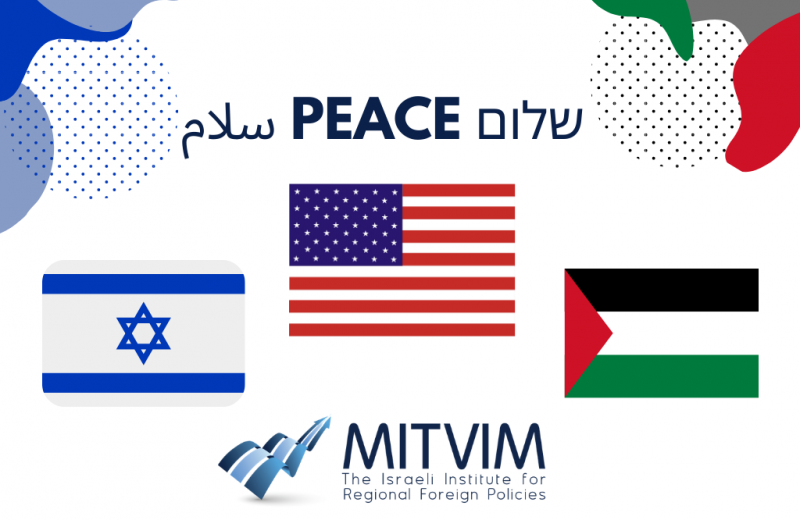 Anyone who holds dear the advancement of Israeli-Palestinian peace has been busy these past four years with containing President Trump’s damage to the prospects of a two-state solution. Biden’s victory ushers in change. While the Israeli-Palestinian issue and renewal of negotiations is unlikely to feature prominently on his agenda anytime soon, Biden’s election generates renewed positive momentum. To make the most of the momentum, the US administration will have to shift policy direction, give the issue greater than expected priority, efficiently promote multilateralism and leverage the changes in the regional arena.

Incoming American presidents tend to adopt policies diametrically opposed to those of their predecessors in order to convey a change in direction. Often, this comes across as forced and unnecessary from a policy perspective. This time, that is not the case. Trump strayed so far from traditional American positions that it will be incumbent on Biden to reverse policy on many issues. In terms of personality and moral compass, the next President is also Trump’s polar opposite. These differences will manifest themselves on the Israeli-Palestinian issue.

To renew peace efforts, Biden will have to update U.S. policy quickly. This means pulling back from Trump’s “deal of the century”, expressing renewed commitment to the two-state solution, opposing steps that undermine it and incentivizing those that encourage it. Biden will also have to reverse decisions by Trump that weakened moderate Palestinian leaders. He will have to restore, and even increase, suspended U.S. funding to the Palestinians (including to Israeli and Palestinian pro-peace organizations), re-open the U.S. Consulate in East Jerusalem (and not subordinate it to the U.S. Embassy in Israel), and invite Palestinian representatives back to their Washington mission shut down by Trump. A change in policies and reversal of decisions will enable the Biden administration to build trust with the Palestinian Authority and heal the rupture that Trump has caused. The U.S. will once again have open and effective channels of communication to both sides, allowing it to resume the role of mediator that it had played (not always successfully) for decades.

Conventional wisdom has it that the Israeli-Palestinian issue will not be a priority for the Biden administration. Many in the peace camp are therefore convinced that they should not nurture much hope, especially given the multiple domestic challenges facing the new administration. That might well be the case, but it is not necessarily inevitable. Pro-peace Israelis and Palestinians have a duty to make clear to the Biden administration the paramount importance of this issue. The obstacles to peace are piling up. Severe damage was done in recent years to the prospects for peace, damage that must be repaired. Israel’s right-wing government seeks to make a two-state solution unviable, and domestic trends in Israel and among the Palestinians do not bode well for peace either. Faced with this reality, the White House must make it clear that the Israeli-Palestinian issue is important and urgent, that resolution of the conflict is essential and feasible, and that enhanced dialogue and cooperation between Israelis and Palestinians is vital to achieve that end. Such messages, even if not initially accompanied by significant policy moves, would empower Israeli and Palestinian advocates for peace and will help reshape public discourse in Israel.

Yet another accepted view these days is that Biden will advance a multilateral approach to U.S. foreign policy. In adopting such an approach, the Biden administration will restore the Obama administration’s style of foreign policy, respond to the need for joint action in the face of the Covid-19 crisis, and work towards healing the transatlantic rift created by Trump’s defiant attitude toward the EU and NATO. Such a multilateral approach could be advantageous for Israeli-Palestinian peacemaking, especially if implemented in a more effective manner than Obama did. Although the U.S. is central on the global stage, it cannot resolve the Israeli-Palestinian conflict alone. Previous US administrations recognized this limitation, but were hard pressed to act accordingly. While the U.S. spoke about multilateralism, and took certain steps in that direction, it was unable to change its pattern of independent action and its aspirations for sole leadership.

To implement effective multilateralism that advances peace, the Biden administration should first and foremost promote the formation of a new multilateral mechanism, in essence an updated version of the Quartet (formed in 2002, and including the U.S., Russia, the UN and the EU). Key European and Arab states would be invited to join this mechanism, which would have to engage with pro-peace Israelis and Palestinians who can articulate the needs of both peoples to the international community. Such a mechanism could formulate renewed international understandings on the parameters for an Israeli-Palestinian final-status agreement. This would require adapting previous policy documents initially drafted in the early 2000s (such as the Clinton parameters, the Bush roadmap and the Arab Peace Initiative) to current circumstances. The multilateral mechanism could also lead to the formulation of an international incentive package for peace that would impress upon both Israel and the Palestinians the fruits of peace. Making the benefits of peace tangible and specific from the outset will boost political willingness and public support for achieving it. The international community has expressed support in the past for such a package, but no attempts were made to devise one under the Trump administration.

What did occur during the Trump period was a change in Israel’s relations with states in the Middle East. The Trump administration contributed to a significant strengthening of Israel’s ties with Gulf states, but did so by circumventing the Palestinian issue and weakening the Palestinian Authority. Biden should help Israel manage its emerging ties with the UAE and Bahrain, but in a manner that ensures advantages for Israeli-Palestinian peacemaking. Israel’s ties with Jordan and Turkey, two countries with a direct bearing on the Israeli-Palestinian issue, deteriorated under the Trump administration. American investment in improving these relations could pave the way for additional opportunities for the Israeli-Palestinian negotiation track in the future. And finally, a new regional organization was formed this past year in the Eastern Mediterranean — the Cairo-based gas forum (EMGF), of which both Israel and the Palestinian Authority are members along with several Arab and European states. Biden could leverage US engagement in this forum to advance economic and diplomatic Israeli-Palestinian cooperation.

Biden’s move into the White House will generate opportunities and hope for the Israeli-Palestinian context and beyond. Renewed U.S. involvement in advancing the two-state solution should be viewed with optimism. Israel must greet it with open arms, rather than engineering provocations such as an expansion of settlements. The measures that the Biden administration can and is expected to take during its term will not in themselves yield the hoped-for peace, but with tailoring and precision, they could serve as a positive and significant turning point, injecting new energy into efforts to advance it.

**The article was published by the Middle East Institute, 30 November 2020

US elections / Biden / Israel-Palestine
Prev
All Publications
Next