EU Diplomacy and the Arab-Israeli Conflict: How Can Europe Effectively Promote Peace? 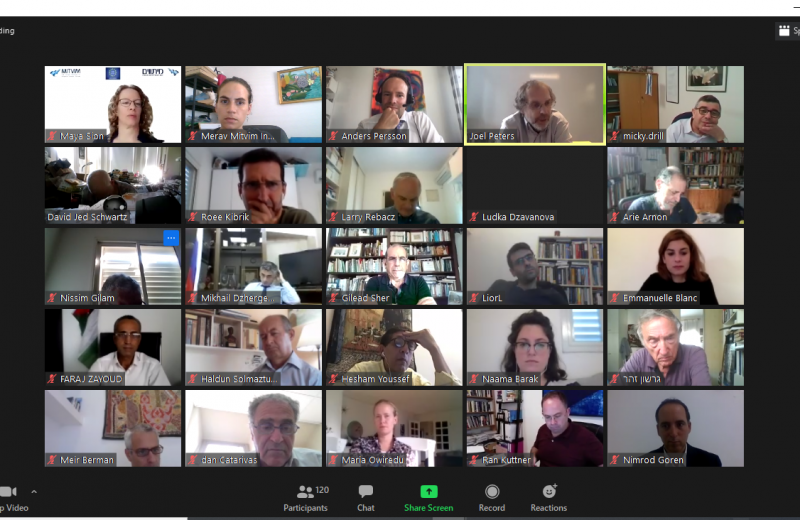 Dr. Anders Persson, Linnaeus University: The Israeli-Arab/Palestinian conflict has been more important to the EU than other conflicts. However, the thesis that if this conflict is resolved, other regional problems and conflicts would be resolved has been proven wrong in the last decade. The EU has not achieved its objectives in its attempts to resolve the Israeli-Palestinian conflict, and it was probably never realistic to believe it would be able to do so. It never led high-level diplomacy in the peace talks, but it had a major normative role and it played a technocratic role in building Palestinian institutions. There is a big gap between having leverage and using it. The EU has an enormous economic leverage both over Israel and the Palestinians, including the agreements it signed with Israel in the field of research and beyond. Compared to other international actors, the EU is highly consistent, predictable and transparent in its positions. The EU has been committed to an “inside-out” approach to conflict resolution: first Israeli-Palestinian conflict resolution should be reached, then Israeli-Arab. But the current trend is the “outside-in” approach (promoting Israel-Arab normalization prior to progress in the peace process), and this might, to the EU’s concern, bypass direct negotiations with Palestinians and the promotion of the two-state solution. Over the years, three European policies have stood out: (1) Its decades-long legitimization of the Palestinians, including the PLO, and their right to statehood; (2) Its firm recognition of Israel’s right to securely exist within internationally recognized borders without being subjected to terror or boycotts; (3) Its early and continuous singling out of the settlements as a serious obstacle to the peace process. Nowadays, the EU is too divided to be effective. Regarding Israeli criticism of EU funding to the Palestinians in recent years, the Israeli strategy is to have the cake, eat it, and complain about it. When push comes to shove, Israeli policymakers want EU aid to the Palestinians to continue flowing.

Prof. Joel Peters, Virginia Tech University and Mitvim Institute: The EU’s involvement in the Arab-Israeli conflict throughout the 1970s and 1980s can best be described as performative diplomacy.  Europe was keen to forge a common foreign policy and identity, and to gain visibility.  Europeans took pride in their ability to develop a common set of positions and principles on the conflict.  Europe’s involvement in the conflict was driven by an outlook that its traditional ties with the Middle East obligate it to play a special role in the resolution of the conflict, even though it was never made clear what these obligations consisted of and why that afforded it a special and unique role. During the Oslo years, Europeans were resentful of being sidelined from the negotiations.  Europe wanted to be a player, not just a payer, and thought it should be given a role commensurate with its standing in global affairs.  With the 1980 Venice Declaration, Europe recognized the Palestinians right of self-determination. Yet it took another 20 years for the EU to call explicitly for a Palestinian state, and that took place only after the Oslo process collapsed. Looking back this can be seen as a failing in European diplomacy towards the conflict, which continued to speak of the Palestinian right to self-determination rather than explicitly call for Palestinian statehood.

Prof. Raffaella A. Del Sarto, The Johns Hopkins University School of Advanced International Studies, SAIS Europe: Europe remained trapped in the logic of the Oslo period despite the changes in recent decades, e.g., the collapse of the Oslo process, the split within the Palestinian leadership, the expansion of Israeli settlements, the rightward shift in Israeli politics and public opinion, and the emergence of a binational reality on the ground. The Europeans remain bound to the Oslo logic for three main reasons: (1) The institutional setup of EU foreign policymaking, e.g., the separation between trade relations and other foreign policy issues requiring consensus among member states; (2) The lack of an international consensus on an alternative resolution to the conflict, with the US remaining the key player, and Israel not being interested in a greater European role; (3) European desire for stability and economic benefits in its neighborhood and the hesitation of rocking the Israeli-Palestinian boat too much. The EU and its members remain the largest donor to the Palestinians, with Israel’s tacit blessing. Yet, Europe is being criticized and regularly attacked by Israelis for this funding, which is actually in Israel’s interest. The EU maneuvered itself into an absurd situation, helping to maintain a situation that makes the achievement of the two-state solution less likely while also maintaining excellent trade relations with Israel. The EU has not been effective in promoting peace in recent decades, but the current international climate offers important opportunities to do so. Proposals that have been circulating include a clear definition of incentives and ‘red lines’, addressing asymmetry by recognizing Palestinian statehood, pushing for Palestinian elections, or the phasing out of aid to the Palestinian Authority, thus forcing Israel to pick up the costs. But the institutional setting of European foreign policymaking remains a serious obstacle to reaching common ground.

Attorney Gilead Sher, Chief of staff to former Israeli PM Barak and former senior peace negotiator: Europe could play an important political and economic role in any future resolution of the Israeli-Palestinian conflict by preserving the conditions for an eventual two-state solution. Indeed, it played second fiddle to the US. Over the past three decades, however, important benchmarks in the political process occurred on European soil or were facilitated by European mediators, pointing to the role Europe could take up in the future. This is particularly relevant considering developments such as the possible reelection of US President Trump, the stepping down of Palestinian President Abbas and Israel’s normalization of ties with Gulf states. To effectively promote peace, the EU should embrace a three-pronged and gradual approach, operating at bilateral, regional, and international levels, and not insist solely on a paradigm of direct Israeli-Palestinian negotiations. For example, providing locations for secret talks, or reviving the Quartet, engaging with regional allies, such as Egypt, Saudi Arabia and other parties. It could also support independent and coordinated efforts: alongside regional and bilateral tracks, within the framework of the Quartet, the EU should push independent and coordinated measures for gradual advancement to a two-states-for-two-peoples solution. This goes beyond simply sanctioning conduct. It requires incentives and international support for constructive steps by both sides in implementation of agreed segments of treaties, consistent with the two-state solution, e.g. unilateral withdrawal from certain areas of the West Bank, Palestinian education, subsiding terror, and state-building. Europe should try to intertwine its engagement with Israeli-Palestinian affairs together with the new normalization process that has been jump started by Gulf States.

Dr. Nimrod Goren, Founder and Head of the Mitvim Institute: Resolving the Israeli-Palestinian conflict should be a top priority for Israel, and Israel’s recent normalization agreements with the UAE and Bahrain should not come at the expense of promoting Israeli-Palestinian peace. International actors, among them the EU, can play a central role in advancing peace. However, in recent years, the EU has not been very effective in doing so. Internal divisions among EU member states prevents the EU from taking joint action regarding the Middle East Peace Process. EU leaders did voice clear opposition to Israel’s annexation intentions in the West Bank, but could not go beyond that. To more effectively promote peace, Europe could put forward a counterproposal to the Trump plan, which will offer a constructive pathway to a two-state solution. The EU can increase its support to pro-peace Israeli and Palestinian civil society organizations, as to enable more positive interaction between societies. The EU can also advance the establishment of a new international mechanism to advance Israeli-Palestinian peace, updating or revising the existing Quartet. The EU, which already offered Israelis and Palestinians an incentive for peace (the 2013 offer to establish a Special Privileged Partnership with the EU), should work with other regional and global actors to introduce a coordinated international package of incentives for peace. The EU’s Foreign Affairs Council already acknowledged the need to do so, but did not follow-through. The EU and Israel should relaunch their high-level political dialogue (the Association Council, suspended since 2012), and utilize this platform to also discuss peacemaking and the EU’s role in the process. Finally, the EU can encourage Palestinian participation in joint endeavors between Israel and other regional states, whether in the Eastern Mediterranean or in the Gulf.

Dr. Maya Sion Tzidkiyahu, Co-President of the Israeli Association for the Study of European Integration and Director of the Program on Israel-Europe Relations at the Mitvim Institute: The different speakers agreed that Europe has been ineffective in the Israeli-Arab and Israeli-Palestinian conflicts, although it has tools and leverage which enables it to influence both sides of the conflict. The EU is unable to use these tools due to its historical past with Israel and due to internal political disagreements. Towards Israel, the EU has many sticks, while the carrots it can offer are not as significant. There was also agreement among the speakers that the EU can become more effective and put forth renewed or new ideas and initiatives. After Foreign Minister Ashkenazi’s recent visit to the European Foreign Affairs Council in Berlin (September 2020), the possibility of reconvening the Israel-EU Association Council should be advanced.