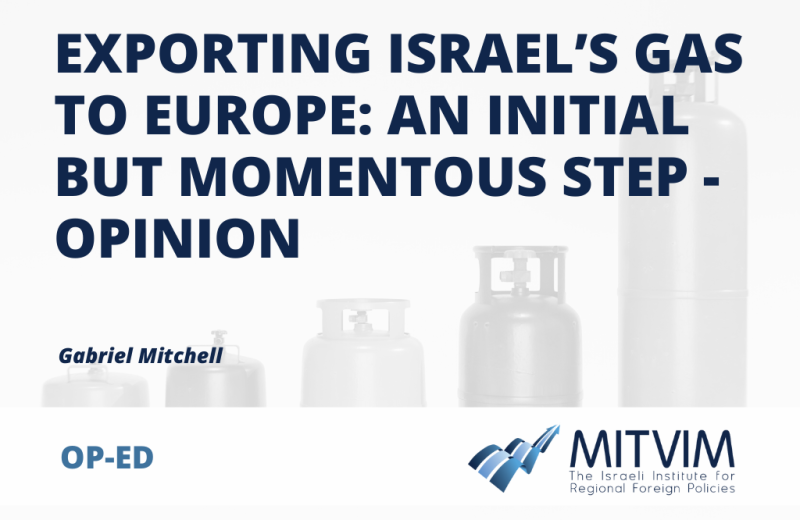 Since the discovery of off shore natural gas last decade, Israeli officials have ambitiously pursued an export agreement that would deliver natural gas to Europe. And last week, Israel took its most meaningful step yet toward achieving this goal by signing a memorandum of understanding (MOU) together with Egypt and the European Union.

The MOU articulates that Israel and Egypt will increase natural gas sales to EU countries, who in the wake of Russia’s invasion of Ukraine are trying to reduce their dependence on Russian fossil fuels. According to the agreement, Israel will deliver natural gas via pipeline to Egypt, where it will then be converted to liquefied natural gas (LNG) and sold on the European market.

There is good reason for the fanfare around the agreement. The EU is moving heaven and earth to replace the 150 billion cubic meters (BCM) that Russia delivered in years past (40% of its total annual needs). By committing themselves to exporting natural gas to Europe, Israel and Egypt reaffirmed their commitments to the West’s efforts in this conflict.

And after years of discussions that failed to produce fruit, the signing of this MOU is a particularly important achievement for Israel – albeit one that materialized as a byproduct of geopolitical developments beyond anyone’s control.

Successful energy diplomacy is as much about confidence-building and momentum towards the future as it is about any singular project in the present moment. This new agreement accomplishes both, addressing immediate concerns while presenting Brussels and Jerusalem an opportunity to diversify their energy relationship in the coming years.

Nevertheless, it is also important to be modest. The MOU’s language was vague, using terms like “endeavor” and “exploring possibilities” to reflect a shared interest in cooperation, without legally binding the parties to any contractual obligations. This was done intentionally. The global energy market is in tremendous flux and everyone is hedging their bets in the event a more affordable deal comes along.

The MOU doesn’t commit to investing in new infrastructure that would expand Israel’s capacity to export natural gas or Egypt’s ability to liquefy it. Presently, Israel can deliver somewhere between 7-10 BCM to Egypt via existing export contracts, where it could then be converted into LNG and sold on the global market. Future pipeline projects will enable this quantity to increase, however Egypt’s liquid natural gas (LNG) terminals can only convert around 17 BCM per year.

IN OTHER words, the MOU loosely weaves EU energy interests into Israel and Egypt’s current energy partnership, as well as the broader trend of energy cooperation in the Eastern Mediterranean. This isn’t a game changer that will alter European energy security, rather a piece of a complex puzzle that Brussels is trying to tackle with a combination of short, medium and long-term policies on the import of fossil fuels and the development of renewable projects. It also means that future exports to Europe won’t dramatically weaken Israel’s energy security, as some have claimed. The quantities aren’t significant enough and the timeframe that the parties are discussing isn’t long enough.

To fully maximize the potential of this agreement, Israel should pursue additional methods beyond natural gas exports to support Europe’s efforts. Investing in renewable infrastructure and technology would both enable Israel to expand its storage capacity (which in turn would allow it to export more natural gas), as well as contribute to international efforts to transition from fossil fuels. Israel has yet to green-light the EuroAsia Interconnector, a proposed electricity interconnector or high-voltage cable that would link the electricity systems of Greece, Cyprus and Israel.

Unlike pipelines, interconnectors transfer electricity in both directions and are commonly viewed as one of the better vehicles to maximize the strengths of renewable energy. Imagine a scenario where Israel – alongside other Middle Eastern and Mediterranean states – supplied renewable-based electricity to Europe. And with the right dose of American mediation, Israel might find the right language to reach a maritime boundary agreement with Lebanon, thus enabling international oil and gas companies to explore additional Mediterranean waters and discover more hydrocarbons.

When world leaders gathered at COP26 in Glasgow last November, the conversation focused almost exclusively on the transition to renewables and combating climate change. While Russia’s invasion of Ukraine dramatically altered the short-term interests of Europe and its allies, those long-term goals remain unchanged.

Eastern Mediterranean states, such as Israel, that can adeptly navigate between these somewhat contradictory trends will not only play a constructive role in supporting Europe during this current crisis but help lay the foundations for a more interconnected and renewable tomorrow.