Gabi Ashkenazi should meet with
Palestinian leaders in Ramallah 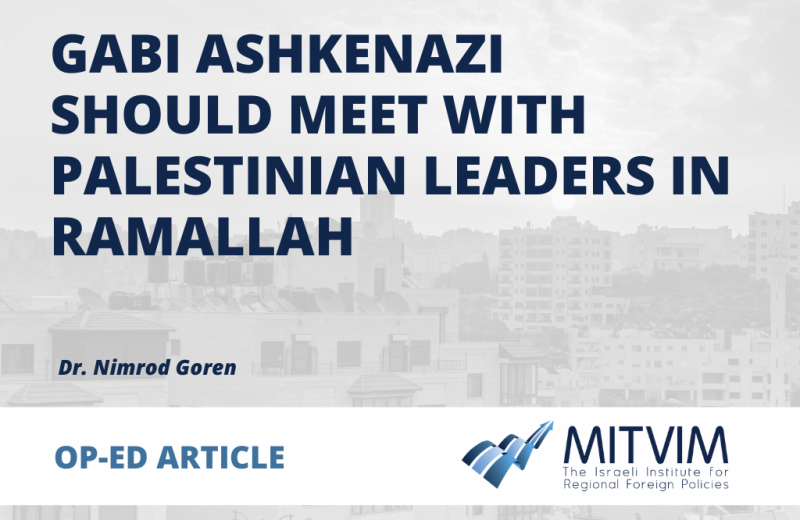 Foreign Minister Gabi Ashkenazi’s May 30 visit to Cairo was an unusual and positive event. For too long, the strategic ties between Israel and Egypt have been conducted mostly by security officials rather than diplomats. Even as ties expanded in recent years, it was Israel’s Ministry of Energy and Ministry of Intelligence that played a growing role. The Ministry of Foreign Affairs (MFA) remained a rather marginal player in these relations, until Ashkenazi’s visit that may symbolize a change for the better.

Since taking office a year ago, Ashkenazi made efforts to strengthen the MFA, following years during which it was deliberately weakened by Prime Minister Netanyahu. In doing so, Ashkenazi has recorded some success. Under his leadership, for example, the Ministry has become a more significant actor in the relationships with Arab states, although it was excluded from the final stages of preparation for the signing of the Abraham Accords. Beyond the growing recent involvement in ties with Egypt, also due to the long-delayed government approval of Amira Oron’s appointment as Ambassador and her work in Cairo, Ashkenazi has also moved (together with Minister of Defense Benny Gantz) to improve relations with Jordan, which had deteriorated sharply due to deep Jordanian mistrust of Netanyahu.
However, whereas Ashkenazi’s Twitter account has featured, over the last year, a growing number of reports about meetings with his counterparts in the Arab world, including with representatives of countries with which Israel does not have official relations, one key diplomatic issue has been conspicuously absent from Ashkenazi’s schedule and the MFA’s agenda – Israeli-Palestinian cooperation and peace building.
The Foreign Minister has not met with Palestinian Authority President Mahmoud Abbas, nor with Palestinian Foreign Minister Riyad al-Maliki, at least not publicly. A meeting with al-Maliki was scheduled for January 2021 but was postponed. Ashkenazi has repeatedly mentioned the importance of dialogue with the Palestinian Authority, but has not done enough in this regard.
Absent direct channels of diplomatic dialogue with the Palestinian leadership and policy elite, the MFA often relies on information from Israel’s security agencies regarding developments on the Palestinian side, providing it with only a limited understanding of the goings on next door.
THERE IS no reason for Ashkenazi to avoid meeting with senior Palestinian Authority officials. Members of Israel’s previous government, then-Finance Minister Moshe Kahlon and Economy Minister Eli Cohen met frequently with their Palestinian counterparts, including public meetings and a visit to Ramallah. The economic ties, like the security coordination between Israel and the Palestinians, have advanced shared interests not preconditioned on any diplomatic solution of the conflict between them.

Ministerial-level engagement with the Palestinians by the current Israeli government has been curtailed. Finance Minister Israel Katz, who did not meet with Palestinian counterparts in his previous post as Foreign Minister (2019-20), has not met with them in his current role, either. Even Economy Minister Amir Peretz, although a member of the peace camp, has not held public meetings with his Palestinian counterpart. Energy Minister Yuval Steinitz has been the one to do so – within the framework of the Cairo-based Eastern Mediterranean Gas Forum, of which both Israel and the Palestinian Authority are full members.

The MFA has largely been absent from the Palestinian issue, unfortunately so. Israel should be interested in bolstering Palestinian moderates, such as the current Palestinian Authority leadership, which is committed to the two-state solution, rejects violence and is a bitter foe of Hamas. Israel should regard it as a worthy interlocutor, certainly in the wake of the latest round of fighting with Gaza and the desire to bolster the Palestinian Authority at the expense of Hamas.
Ashkenazi still has an opportunity to fix this flaw in the seemingly little time he has left as foreign minister, before a new government is installed. Rather than resting on his laurels and looking back with satisfaction at a year filled with diplomatic activity (although Netanyahu is still holding up approval of more than 30 ambassadorial appointments, nominated by the MFA), he could make one final move. A move that will make up for a key shortcoming of his tenure, that will symbolize the relaunching of diplomatic dialogue with our closest neighbors, that will be aligned with the policies of the Biden Administration, and that will nurture hopes that peace is possible and that another round of escalation can be avoided.
Go to Ramallah, Ashkenazi. Meet your Palestinian counterpart there; convey to him a message of partnership, a yearning and hope for peace; seek together opportunities for cooperation and advancing shared interests; convey to Israelis that they have a partner in Ramallah; and pave the way for dialogue with the Palestinians for your successor at the MFA. Ashkenazi, you have already made a positive mark this past year on Israel’s relations with the Middle East, Europe and the Mediterranean. Reaching out to the Palestinians will complete the picture and provide the best finale to your term as foreign minister.
**The article was published on The Jerusalem Post, 3 June 2021
Prev
All Publications
Next