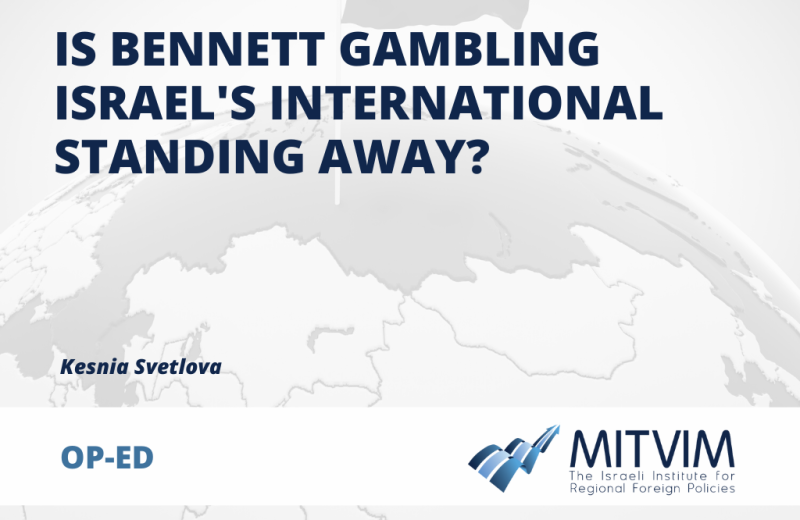 Two Middle Eastern leaders are now busy working to mediate a ceasefire between Russia and Ukraine: Prime Minister Naftali Bennett and Turkish President Recep Tayyip Erdogan. Both countries have good ties with both sides in the conflict, and both are dependent on Russia to some extent. Israel’s Achilles’ heel is Syria, while for Turkey, it is diverse economic ties.

While Erdogan has fulfilled the role on his own terms – speaking to Russian President Vladimir Putin by phone while selling advanced drones to the Ukrainian military and closing the Bosporus Strait to Russian naval ships, Bennett has flown to secret meetings on Shabbat, avoided any condemnation of Russia as well as any weapons sales to Ukraine. Erdogan, whose ties with the West have seen better days, is taking less of a risk. Bennett, who heads the government of a country strategically allied with the US, is putting his neck on the line for mediation efforts between Moscow and Kyiv.

Of course, if there is even the slightest chance of there being a solution that could satisfy both sides, Bennett must take it. Should he succeed, he will earn international recognition and dignity, and honor at home. However, as long as Russia continues to pummel Ukraine, bomb buildings, and massacre innocent civilians, Bennett is perceived as the only Western leader trying with all his might not to anger Putin by avoiding sanctions and condemnation and the only Western leader offering the Russian regime, which now appears more isolated even than North Korea, legitimacy.

When Russia annexed the Crimean Peninsula, Israel did not issue any condemnation. When no Western leader would attend Russia’s Victory Day Parade, then-Israeli Prime Minister Benjamin Netanyahu traveled to Moscow and marched with Putin at Red Square. When the Russians accused Europe and Ukraine of allowing neo-Nazis to operate freely and rewriting history, Israel took Russia’s side. And now, as Putin lays out his bizarre and fictitious goal of “de-Nazifying” Ukraine, Israel says nothing about this show of contempt for the Holocaust.
With all due respect to the need to maintain Israel’s security interests, policymakers here must understand Russia only does what is good for Russia. That means that if Moscow decides tomorrow to provide Iran with S-400 missile defense systems and Syrian President Bashar Assad with modern fighter jets, then that is exactly what will happen. It’s nothing personal, just interests Moscow must advance to increase sales, bolster its allies, and so on and so forth. It’s doubtful Israel will be abler to influence such moves.

On the other hand, Israel’s strategic ties to the US and Europe could suffer a significant blow. In both these political arenas, many have already spoken critically of the Israeli position, which is better suited to the Middle East landscape, as the United Arab Emirates, Egypt, and Saudi Arabia have all remained silent on the issue. Both the US and Europe are questioning whether Israel is at all interested in being part of the collective West.

It remains unclear whether Bennett’s attempts at mediation in Moscow will be deemed a success. I hope they are. I hope the terrible slaughter in Ukraine will stop without Kyiv having to relinquish its sovereignty and bend to Moscow. But the questions that arise from the contemporary Israeli experience do not necessarily pertain strictly to Ukraine or Russia, but to Israel and its place in the international arena.

The op-ed was published in Israel Hayom in March 2022.