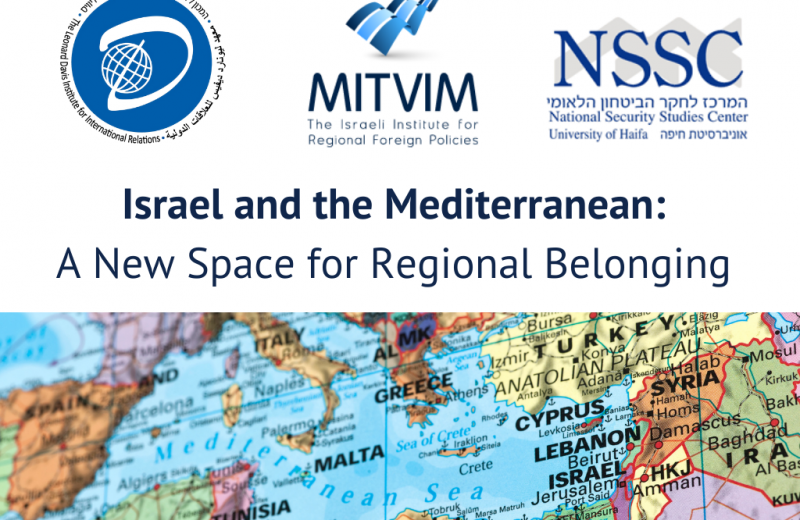 The Eastern Mediterranean has attracted significant attention over recent years. New economic opportunities and geopolitical developments are contributing to this trend and are turning the region into a central tenet of Israel’s foreign policy. Together with regional alliances and bilateral relations that Israel is advancing in the Eastern Mediterranean, the Israeli public has also begun to perceive the area as a new space for regional belonging. In the 2020 Israeli Foreign Policy Index of the Mitvim Institute, 25 percent of the Israeli public considers Israel primarily as part of the Mediterranean (as opposed to 29 percent who answered that Israel belongs more to the Middle East and 24 percent to Europe).

Throughout history, the Eastern Mediterranean played a central role in global political, economic, and social transformations. The recent far-reaching changes and developments in the region have repositioned it as a distinct and central region in the international arena. Environmental concerns, the movement of refugees, the struggle between powers over trade routes, political conflicts among and within the countries, economic cooperation, the emergence of security communities and the discovery of natural gas reserves, are all processes that tie regional members to the geography of the Mediterranean. These new issues can and should be taken into consideration alongside old issues that characterize the region – a common history, similar climate, the diasporas, shared values, and Mediterranean culture.

Israel is not only active but dominant in the Eastern Mediterranean, with its policy characterized by a myriad of relations and unique approach of non-exclusive policy. Israel strives, with considerable success, to maintain and promote relations with different countries that hold different or conflicting interests, without the relations with one necessarily coming at the expense of relations with the other. Israel is a partner in regional alliances (such as the Alliance with Greece and Cyprus, and the Eastern Mediterranean Gas Forum – EMGF), maintains bilateral relations with many countries openly and formally, and maintains informal relations with other countries. The discovery of natural gas reserves in Israel’s economic waters gives it economic and political power in the region and allows it a wider range of political manoeuvrability. Notably, however, the Israeli-Palestinian conflict, including the ongoing conflict in the Gaza Strip on the shores of the Mediterranean, restricts Israel’s ability to reap the potential benefits that the area holds for it.

The political, economic and social developments in the Mediterranean are ongoing and constantly evolving. The region’s consolidation offers many opportunities and challenges for Israel, and is accompanied by both cooperation and struggles over the region’s desired characteristics, the regional institutions that should be established, common values, geographic boundaries, and each member state’s role and political power.

To assess possible developments, identify opportunities and challenges, and thus discover the necessary political actions, it is first necessary to understand the arena and identify trends, processes, different issues at stake, and active players and their various interests. To this end, in 2019 Mitvim – the Israel Institute for Regional Foreign Policy, the Leonard Davis Institute for International Relations at the Hebrew University of Jerusalem, and the Center for National Security Studies at the University of Haifa, formed a research and policy group. The group’s goals were to better understand the Mediterranean arena and Israel’s place therein, to formulate guidelines and policy recommendations, and to promote political dialogue with various regional actors.

This paper summarizes the first series of meetings of the research and policy group in 2019-2020 and presents the key insights that emerged throughout it. The meetings focused on global and regional powers’ activities in the Eastern Mediterranean, energy and environmental issues, the impact of the coronavirus epidemic, conflicts and collaborations, and questions of identity and norms. These summaries portray a perspective of what is currently happening in the Mediterranean, the opportunities and challenges facing Israel, as well as a reference to the guiding principles and recommended courses of action for Israeli foreign policy.