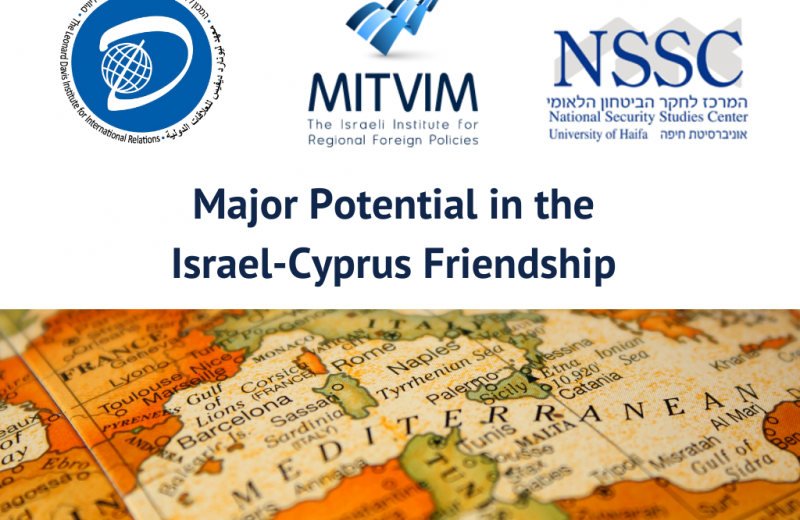 The 9th meeting of the “Israel in the Mediterranean” Working Group was held on March 17, 2021 at the initiative of the Mitvim Institute, Hebrew University’s Davis Institute for International Relations and Haifa University’s National Security Studies Center. The resulting paper focuses on the relations between Israel and Cyprus. The document reviews the development of relations between the two states, the opportunities and challenges they face and the desired future orientation of their ties. It does not reflect agreement among all the participants in the meeting.

The State of Israel and Cyprus are similar in many respects – both feature island characteristics (in terms of geography and/or state of mind), both control natural gas reservoirs, and both endure a complex, prolonged national conflict. In addition to bilateral ties and partnerships, Israel and Cyprus are members of multilateral frameworks and alliances in the Mediterranean Basin, the most prominent being the trilateral alliance comprising Israel, Cyprus and Greece and the Cairo-based Eastern Mediterranean Gas Forum (EMGF). Israel and Cyprus cooperate on a wide variety of matters, among them security and military issues, tourism, energy and civil marriage. Their relations have a direct impact on Israel’s ability to ensure its interests in the Mediterranean Basin and realize its goals, such as maintaining regional stability, advancing energy cooperation, encouraging and rehabilitating tourism, and coping with the COVID-19 fallout, along with the ongoing issues of the climate crisis and the growing maritime traffic along regional sea routes.

Three major developments led to the strengthening of Israeli-Cypriot ties over the past decade. The first was the discovery of gas reservoirs in the eastern Mediterranean Basin. The understanding that cooperation would benefit both sides led Israel and Cyprus to sign an agreement in 2011 demarcating their Exclusive economic zones (EEZs) and their commitment to advance energy cooperation. Second, the growing acrimony in Israel’s relations with Turkey, especially since the 2010 flotilla to Gaza incident, and the concurrent rise in Cypriot-Turkish tensions following the failure of negotiations to resolve the conflict over Northern Cyprus, enabled and encouraged closer Israel-Cypriot ties. Third, the regional instability stemming from the Arab Spring led Israel and Cyprus to seek cooperation that would contribute to regional stability.

The strengthening relations between the two states was manifested in the rapid signing of agreements, arrangements and shared regulations. Given both sides’ growing recognition of the need and importance of these ties, they took advantage of regional developments to advance that goal. Although Cypriot President Christofias (2008-2013) was not particularly enthusiastic about promoting relations with Israel and tended to advocate for the Palestinian side in accordance with the traditional Cypriot position, he realized that his country’s interest lies in closer relations with Israel and set about promoting them. On the Israeli side, in February 2012 Netanyahu became the first Israeli Prime Minister to visit the neighboring island. The trilateral relations with Greece grew out of the mutual relations forged between Israel and Cyprus, and in 2016 the leaders of all three states made it official with a formal strategic alliance.

Interests and Challenges in Israel-Cyprus Relations

Cyprus holds several key interests for Israel, stemming especially from its strategic location and its membership in the European Union (EU). Each state, to some degree, regards the other as a security-strategic hinterland underpinning their military cooperation, even as Israel conveys a clear message that this security cooperation is not directed at a third party. Israel understands that cooperation with Cyprus is necessary for the exploitation of its gas reservoirs, gas production and export. Cooperation with Cyprus is an important component of Israel’s desire for regional stability in the Eastern Mediterranean Basin. Israel also views the Cypriot membership in the EU as an advantage in terms of exerting influence on the organization’s decisions regarding Israel, or at least preventing resolutions that Israel finds unpalatable. Along with the shared political, energy, security and economic interests, the two states cooperate in tourism, communications, the environment, culture, and more, and share a belief in democratic values.

Israel’s interests prompted its decision to strengthen cooperation with Cyprus, but these relations do not come without challenges. A rapprochement between Israel and Turkey could intensify tensions with Cyprus. An eruption of violence in the conflict over Northern Cyprus or between Cyprus and Turkey over their maritime border, as well as an Israeli-Palestinian clash, could also have a detrimental effect on relations. For now, both states are trying to circumvent issues related to their own national conflicts.

The core element of Israeli-Cypriot cooperation, energy, could also create challenges. The high potential and shared expectation of yields from these gas fields could challenge relations if the cooperation fails to meet the high expectations they each harbor. There has already been voiced doubts over the feasibility of some of the shared plans for the production and export of natural gas to Europe, chief among them the gas pipeline plan, thus the sides must consider alternatives. Geopolitical shifts, even positive ones such as the forging of closer ties between Israel and the Gulf States, could also challenge ties with Cyprus should they develop at the expense of the alliance, whether by diverting available resources from strengthening ties with Cyprus to benefit stronger ties with other states, or whether as a result of Israeli commitment to additional actors with clashing or different interests.

The diverse, significant and abundant opportunities in the Israel-Cyprus relationship can be seen as a mirror image to the challenges. Israel and Cyprus must take advantage of their warm ties to deepen their roots and expand bilateral cooperation as much as possible in order to bolster the relations resilience in the face of frequent changes.

Opportunities on energy issues are varied and include a deeper cooperation beyond natural gas resources to energy connectivity projects, such as the Euro-Asia electric cable, and the development of renewable energies. The Regional Gas Forum could also provide a platform for institutionalized cooperation on renewable energy and expand to additional fields such as commerce and maritime regulation. To this end, Israel and Cyprus could cooperate with other members of the forum to expand its mandate to include these issues.

The fabric of cooperation in the region could presumably pose a challenge given the different interests of various actors, but it also opens up significant opportunities. Adding new partners to the varied Israeli-Cypriot regional cooperation ventures could actually strengthen and lend greater weight to relations between the two states and increase their prospects of success. Adding the UAE to energy projects, for example, or Morocco to climate change or maritime agriculture projects would also provide a beneficial opportunity for stronger regional cooperation. The warming of Israeli-Moroccan relations could open up opportunities for Israel to deepen its involvement in regional Mediterranean organizations of which Cyprus is also a member. This, in combination with the EU and its commitment to advancing green energy and a circular economy, and in partnership with the US, further increases the potential for regional cooperation. The political connection to Europe via Cyprus is significant and can be used not only to help Cyprus avert resolutions unfavorable to Israel but also to boost cooperation. The launch of the new EU Southern Neighborhood policy, which seeks to promote cross-border cooperation in the Mediterranean region, constitutes such an opportunity.

Although Israel and Cyprus have generally avoided directly interfering in each other’s conflicts, the conflicts could in reality constitute areas of mutual cooperation. Israel and Cyprus can help each other move ahead with conflict resolution and peace by supporting implementation of concrete measures on the ground, providing the required political support for these peace processes and learning from each other’s experience in conflict resolution.