Renewed Partnership with the Southern Neighbourhood: Implications for Israel 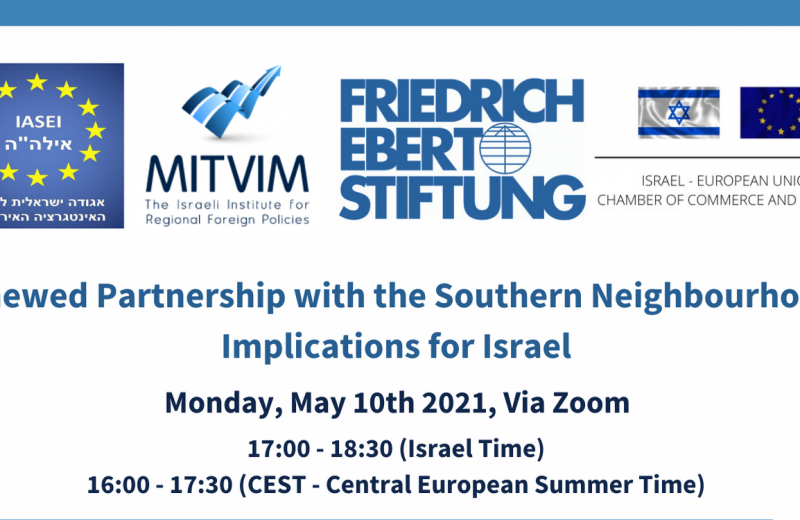 On 10 May 2021, Mitvim – The Israeli Institute for Regional Foreign Policies, The Israeli Association for the Study of European Integration and the Friedrich-Ebert-Stiftung conducted an online conference on Renewed Partnership with the Southern Neighbourhood: Implications for Israel. The event featured Mr. Michele Merloni, Dr. Luigi Scazzieri, Ms. Noa Ginosar and Dr. Maya Sion Tzidkiyahu. This document summarizes the key points raised in the discussion.

Mr. Michele Merloni, Policy Officer – Relations with Israel, The European External Action Service: The Renewed Partnership with the Southern Neighbourhood comes 25 years after the initiation of the Barcelona Process, with its main themes being human development, peace and security, migration and mobility, the strengthening of resilience and new themes of digital and green transition.

Israel has a strong bilateral economic and technical cooperation with the EU.

The EU is the first trading partner of Israel, and in the region Israel is the second or third partner of the EU. In the field of investments Israel is no. 1.

Israel also engages in regional programs on various sectors, including climate, environment, and transport. By the end of 2021, we expect the implementation of the pan-Euro-Mediterranean rules of origin (for those who complete the procedural adoption), which can help the economic integration of Israel in the South-Mediterranean region and with the EU.

In the Joint Communication on the Renewed Partnership between the EU and the southern neighbourhood, the Commission proposes to mobilize up to EUR 7 billion under the Neighbourhood and Development and International Cooperation Instrument (NDICI). Israel is mentioned in the Joint Communication regarding digital transformation and research and innovation, in light of its great added value in those sectors.

In the same document, the EU mentions that it is willing and ready to explore regional, sub-regional or trilateral cooperation and joint initiatives, also in the light of the recent normalization agreements.

Now is the time to reflect and exchange ideas on how to operationalize the Normalization Agreements, how the EU can support the process, the ways in which Israel can contribute and receive economic and political added value from the Renewed Partnership and the areas that can be explored. We attach importance to P2P and initiatives between municipalities, SMEs, schools, universities, associations, etc. Climate change and digitalization are also of importance. It is time to come with initiatives. The participation of experts from Israel and the region is also welcomed.

Dr. Luigi Scazzieri, Research Fellow, Center for European Reform: The Renewed Partnership is an effort to broaden the EU agenda and give greater prominence to green and digital issues, while emphasizing a people-centered agenda on youth and women, rule of law, and democracy.

The question remains to which extent what the EU is offering to its partners is an incentive for them to undertake reforms. This is also because the European model is becoming less attractive and less visible in the region given that there are emerging alternatives such as Russia and China, and the Gulf model.

The Renewed Partnership points to the EU’s wish to play a bigger role in regional conflicts and in the field of security. But the EU has hardly been an influential security actor in the region. Member States have been divided in their positions, which hinders EU action. The EU is unwilling to take on hard security challenges and to think strategically about them. This also comes at a time when the EU is more likely to be focused on internal matters rather than on an external agenda.

Regarding implications for Israel, the Renewed Partnership does not bring major changes in EU policy. The EU will keep looking with Israel for ways to deepen the economic and other frameworks of cooperation. There is much potential to cooperate in the Green and Digital fields. The EU will try and preserve the two-state solution. This is explicitly stated in the document. This will amount to attempt to foster more democracy and accountability in the Palestinian Authority, and member states might want to take a look at the differentiation agenda in response to Israel’s settlement building. The legal framework is there, but it’s not fully implemented, so there might be gradual moves in that direction, but it’s not a priority for the EU, partly because of the internal divisions. If more member states become convinced that what emerges is a one state reality, that gradually would shift and undermine Israel – EU relations and cooperation.

Ms. Noa Ginosar, Political Counselor, Mission of Israel to the EU: The EU worked in partnership with its neighbours in producing the Renewed Partnership document. Foreign Minister, Gabi Ashkenazi, participated in the discussions that Commissioner Olivér Várhelyi (DG NEAR) and High Representative Joseph Borrel conducted with the Southern neighbourhood countries in order to better understand their priorities and challenges. This process was undertaken in order to engage in dialogue with the partner counties, and better understand their challenges and their ideas of projects they would like to advance The Covid-19 crisis has shown that we share joint challenges that cross borders, and those regions need to enrichen and deepen the dialogue and cooperation between them. The EU has a clear interest in tapping into this discussion and can utilize its leadership to foster better relations between different partners that can benefit from cooperating in order to address these challenges. Energy, climate and also defence and security are no longer phenomena which happen in separate countries. These are all regional issues that require dialogue.

From the perspective of Israel, it was significant that the EU’s approach to the Renewed Partnership recognized the most important development in the region in recent times – the normalization of Israel’s relations with new regional partners. In this way, the Renewed Partnership brings forth a tangible connection between regional developments, and EU-Southern Neighborhood relations. Normalization has brought a change of paradigm for the region, for Israel, for the Arab and Muslim world. We see in this process positive implications for the EU both internally and from a regional perspective.

Europe can strengthen its role in the region by tapping into these new developments. We’re looking forward to further exploring with our European partners how to take this forward, by looking at more operational elements and concrete ideas. This process should advance in parallel to the signature of a Partnership Priority agreement between Israel and the EU.

Normalization has already brought forward a myriad of concrete initiatives which are already occurring, with or without Europe. We wish to see the EU and the member states as a very clear partner in this. This would serve to embolden European relevance in the region, as well as in the context of bilateral Israel-EU relations, which can only benefit from cooperation in this area of mutual interest for Israel, the EU and the greater Southern Neighborhood.

Dr. Maya Sion-Tzidkiyahu, Co-President, IASEI; Director of the Program on Israel-Europe Relations, Mitvim Institute: The normalization agreements bring hope for expanding regional stability and economic cooperation and development. They can serve as a new trigger for a renewed MEPP.

Within the Renewed Partnership, Israel and the Arab countries it has relations with (Jordan, Egypt, the UAE, Morocco and possibly also the PA) should decide what regional and inter-regional projects to suggest to the EU. Many projects can be envisaged under the goals the EU set, be it infrastructure to enhance economic relations, or the green and digital transition, climate change, etc. The indirect opportunity is the improvement of EU – Israeli relations if such regional process would take place also under its auspice.

The next Israeli foreign minister should take advantage of the options in the Renewed Partnership, adopt a positive attitude towards the EU, and visit Brussels instead of visiting member states capitals only.

The EU should also sign Partnership Priorities with Israel, as it did with Morocco, Tunisia, Algeria, Egypt, Jordan and Lebanon in the past years.

Israel should also evaluate whether it desires to start negotiations on a Deep and Comprehensive Free Trade Area that deals with services, investments and removal of non-trade barriers.

However, even if no Partnership Priorities is signed, the Joint Communication allows to develop these priorities on the basis of “equivalent policy documents”. In 2005 Israel signed an “Action Plan” with the EU, which is the old generation of the Partnership Priorities. It is not updated but it is very elaborate, and can serve as the basis on which to further develop the relationship.

To watch the conference on the EU’s “Renewed Partnership with the Southern Neighborhood”, click here.