Russia’s Next Target for Intimidation Could Be Israel 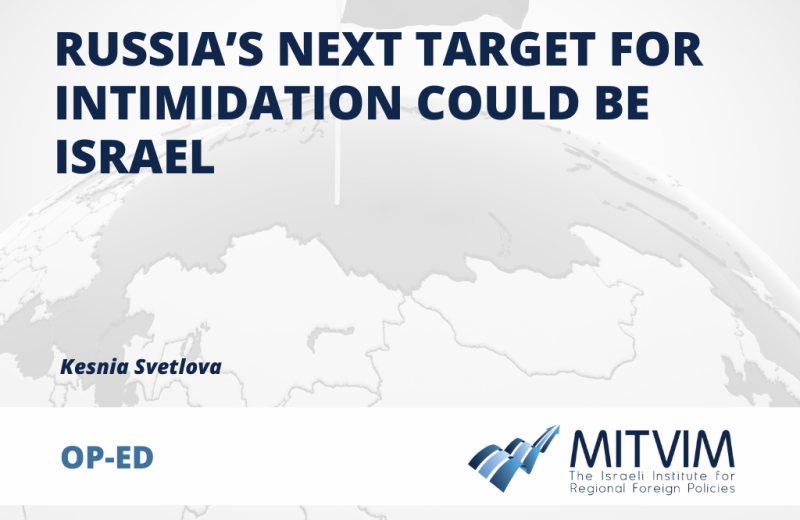 As Russia pounds Ukrainian cities and flaunts its nuclear weapons, there is little doubt that the implications of the war between Russia and the West will be felt globally—and the relations between states that prevailed only two weeks ago are unlikely to remain static. The International Criminal Court in The Hague may investigate possible war crimes committed by Russian leadership, while Western governments keep piling on unprecedented economic sanctions. As a result, Russia will be looking for alternative markets and spheres of influence, specifically in the Middle East and Africa, where it has become very involved during the last decade. While Moscow ratchets up military and economic pressure on Ukraine, using forbidden types of weapons and indiscriminate firepower against civilians, many in Israel fear that Moscow’s next move will happen in the Middle East—where Moscow is formally aligned with Israel’s worst enemies.

By Feb. 15, when the whole world was still trying to guess Vladimir Putin’s real intentions in Ukraine, his defense minister and confidant Sergey Shoigu had traveled to Syria, where he met with President Bashar Assad and inspected a Russian military exercise—the largest that Russia had held in the Eastern Mediterranean since the end of the Cold War. For this occasion, Russia transferred advanced weapons, including MiG-31s armed with hypersonic missiles, as well as strategic Tupolev Tu-22M bombers to its Khmeimim air base, positioning a potent new threat near Israel’s borders.

Just a few years ago, there was hardly any Russian presence in the Eastern Mediterranean. Since the beginning of the Russian intervention in Syria, facilitated by the Obama administration to counterbalance Turkey and aid Iran, Moscow has reinforced its naval presence there dramatically. Although the Russian forces in this area are still limited in comparison with their abilities in the Black Sea, experts from the George C. Marshall European Center for Security Studies believe that Russia already has enough forces to present a potential challenge to longstanding U.S. and NATO naval dominance in the area.

As war clouds gathered over Ukraine, Israel became worried. Israel and Russia maintain tactical cooperation over Syria and run a deconfliction center in order to prevent Russian and Israeli forces from clashing. Since the beginning of Russia’s military involvement in Syria, Israel has been walking on thin ice, trying to balance its own security needs with the necessity of making nice with the Russians who now controlled the Syrian skies. A change in the Russian posture in Syria, particularly as America works to seal its reentry into the Joint Comprehensive Plan of Action (JCPOA) with Iran, portends a far less favorable and more dangerous calculus than the one that Israel has grown used to since 2014.

For a time, the balancing act went well. While the Russians did not prevent Israel from hunting Iranian war targets in Syria (as was often reported in foreign media), Israel refrained from commenting on Russia’s aggressive demeanor—even when the United States publicly voiced opposition. In fact, this arrangement predates Russian involvement in Syria. In 2014—one year before Russia became Israel’s neighbor on its northern border—Israel refused to condemn Russia’s annexation of Crimea despite some pressure from the Obama administration to do so.

But 2022 isn’t 2014. Israeli Foreign Minister Yair Lapid first timidly condemned Russian behavior in a TV interview. He then announced that Israel will vote with the United States and EU countries against Russia in the U.N. General Assembly.

So what might be the repercussions for Israel of its public anti-Russian stance, however mild? There is no doubt that Russia is looking to flex its muscles in Syria, where it’s built an impressive military presence. As Russia slides into a pariah status in the international arena, it will want to upgrade ties with its closest allies in the region: Syria and Iran.

On the military front, signs of Russia’s new regional posture are already visible. During the last few weeks that preceded the war in Ukraine, Russia strongly rebuked Israeli activity in Syrian skies, while Israelis complained that Russia was jamming GPS signals in Israeli airspace. At the end of January, Russia and Syria started joint patrols along the Golan Heights and the Euphrates River. In Israel, this activity was interpreted as a sharp message to Jerusalem: Things in Syria might change soon, and fast. Since other countries like the United States and Turkey also operate in Syrian skies, the Russian message might be addressed to all concerned parties to let them know that Russia is determined to force them out of Syrian airspace and help Damascus reclaim its sovereignty there.

Yet other Russian messages were clearly directed at Israel. Since the beginning of Russia’s invasion of Ukraine, when Israel was still mulling its reaction, busy Russian diplomats found the time to rebuke Israel over construction of new cities in the Golan Heights—possibly in reaction to timid Israeli attempts to support Ukraine without condemning Russia too strongly. While Moscow has since signaled that cooperation with Israel will go on as usual, many in Israel fear that Russia, emboldened by its violent move on Ukraine and furious about global sanctions, will become more aggressive and assertive in protecting its interests in Syria, and pay less attention to possible Israeli responses.

Until recently, some in Israel believed that Russia might work together with Israel and the United States to push Iran out of Syria—under the assumption that Russia and the United States shared this interest in common with Israel. Nowadays, this kind of scenario (however dubious it was in the past) is simply out of the question. Moscow will need Tehran and Damascus more than ever, perhaps even more than they need Moscow. This development might mean more intercooperation between all three parties and a significantly more aggressive tone toward Israel. In turn, if Israel is not able to freely operate in Syrian skies against Iranian military targets, an emboldened Iran seems likely to try to further grow its military presence near Israel’s borders, raising the stakes in Syria, Lebanon, and Gaza.

Another possible target for Russia’s military is the Eastern Mediterranean. If until now the sea was mostly seen as EU and NATO playground, today’s Russian navy presence might pose a serious challenge to Europeans and Americans—and by extension Israel, whose economy depends in large part on open shipping from its ports. Turkey might soon see new developments in Syrian Idlib, where pro-Turkish militants still operate, and 3 million Syrians find their refuge, which may create wider instability in the region.

While Russian-Iranian rapprochement in Syria seems almost inevitable, the future of strategic relations between the two countries is still a puzzle.

Until recently, Russia saw Iran as a problematic neighbor, an occasional partner (for example, in Syria) and mostly as a country that was best held at arm’s length. When Iran demanded acceptance as a full member of the Eurasian Economic Treaty (a Russian-led block that also includes Belarus, Armenia, Kazakhstan, and Kyrgyzstan), Russia took its time to “consider.” And when Iranians offered extensive cooperation in trade and industry, Russia generally ignored these requests. During the visit of the new Iranian president to Russia in January this year, no important treaty or memorandum of understanding was signed, to the disappointment of the Iranians.

Now, Russia needs Iran and its markets more than ever before. For Moscow it might be the right time to expand the partnership, as the Iranians have been demanding. Yet if Iran signs the nuclear deal, brokered in large part by Russia, the roles of Russia and Iran may be reversed, with Iran—if sanctions are lifted—having a stronger and even determining hand in that relationship.

There is a loud anti-Russian camp in Iran that remembers well how Moscow ignored Iranian demands for a long time. Yet there is also no doubt that Tehran will be happy to receive the latest Russian weapons. It now seems likely that Iran will get the weapons systems it demanded a long time ago even if for some reason the nuclear deal is not finalized. Russia has nothing more to lose and it will have to seize every opportunity to continue to sell its weapons to anyone who demands them.

What’s on the Iranian shopping list? According to the U.S. Defense Intelligence Agency, Iran is interested in SU-30 fighters, Yak-130 trainers, T-90 tanks and—the cherry on top—S-400 surface-to-air missile defense systems that Russia previously refrained from selling. Even if Russia fulfills only part of the Iranian shopping list, it will be very bad news for Israel. Until recently, advanced Russian missile systems inside Syria were under full Russian control. That might change as well.

The greatest threat that Russia poses to Israel may be in the expansion of its regional influence, especially in the absence of an effective U.S.-led security structure. With the exception of Lebanon and Kuwait, which denounced Russia, and Syria, a full Russian client that denounced the West, the Arab states are currently sitting on the fence, unwilling to put their neck on the line for either the United States or the Russians. During the last few years some of these countries, particularly the Gulf states, didn’t hide their frustration with American Middle East policy, which aimed under both the Obama and Trump administrations at diminishing the American presence in the region—and which under Presidents Barack Obama and Joe Biden put a U.S. nuclear deal with Iran at the top of American regional priorities. In response, the UAE, Saudi Arabia, and Egypt all began purchasing Russian (and Chinese) weapons, and putting their relations with Moscow on display.

Russia has significantly expanded its web of relations in the Middle East, mostly due to the fear of some countries that they might be abandoned by the West. If the United States wants these countries to join an alliance against Moscow, it might have to rethink its regional policy—or else rethink its relations with Arab countries who might wish to continue with their current balancing act. Yet Egypt, Jordan, Morocco, and Tunisia heavily depend on wheat supplies from Russia and Ukraine. Rising prices on basic food staples and energy might disrupt stability in many countries in the region, creating more risks and insecurity. All of these developments might in turn have a negative influence on Israel and its attempt to build new alliances in the region—especially if Russia sees Israel as an American instrument, while the Americans see Iran as a partner.

There is little doubt that fateful events in Ukraine have turned over the chess board in the Middle East, as elsewhere. While risks for Israel are bound to increase, it will need—now more than ever—firm American support and a confident U.S. policy in the Middle East. A new American deal with Iran, which remains America’s regional priority even during the war in Ukraine, seems unlikely to provide those assurances.

The op-ed was published in the Tablet in March 2022.