The dangerous game of the Jerusalem flag march 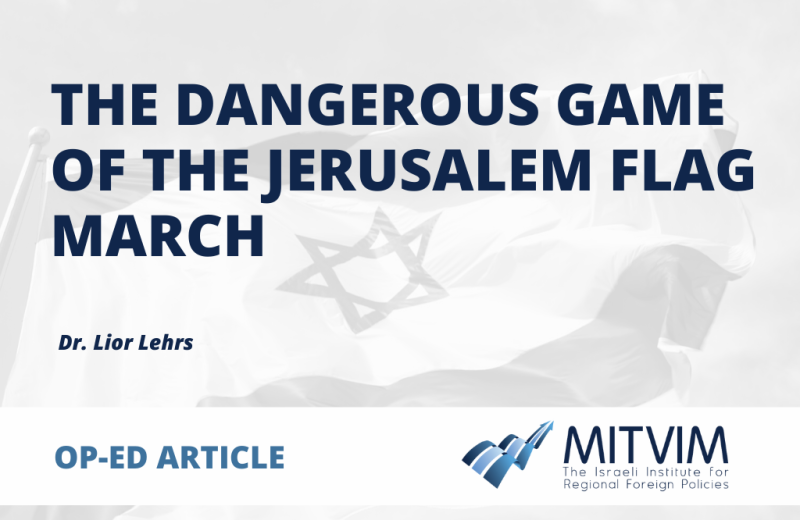 Last month’s flag march in Jerusalem drew extensive attention in Israel, the Palestinian arena and the international community. Israeli policymakers were forced to decide whether to allow the event, and specifically whether to allow the parade’s traditional route through sensitive Muslim areas and sites, such as the Damascus Gate to the Old City and its Muslim Quarter. This was the new government’s first test on the very week it was sworn in and just a month after the May 10th flag march that played a role in the onset of the latest round of fighting with Gaza.

The controversy over the flag march (rikudgalim) arises annually on Jerusalem Day and has prompted several past Supreme Court rulings on the issue. Critics argue that marching through the Muslim Quarter (and previously through Sheikh Jarrah, too) constitutes deliberate provocation, especially given racist anti-Arab slogans voiced by event participants, often accompanied by violent harassment of local residents.
Police usually shutter shops along the march’s route in the Muslim Quarter toward the event. Opposition to the march usually intensifies if it falls on the month of Ramadan, when many Muslim worshipers come to pray at al-Aqsa Mosque. Advocates of the march argue that they are exercising their right to free speech and demonstrating Israeli sovereignty over Jerusalem, while the opponents underscore the emotional damage to the Palestinian residents and the potential for violent escalation.
This issue relates to a theoretical discussion in the field of conflict studies around the terms “contentious rituals” (Blake, 2019) and “rituals of provocation” (Gaborieau, 1985). They refer to symbolic public activities carried out in an offensive manner against a rival party in a disputed space under conditions of a national, ethnic, religious or cultural conflict. These rituals include both cultural and political dimensions and touch on issues and symbols at the heart of a conflict, and they often serve as a source of friction, tension and even violent clashes.
The most prominent example of these rituals cited in the literature are the Protestant Orange Order parades held against the backdrop of the Northern Ireland conflict. These marches are based on an historical tradition dating to the 18th century, with the main parade held on July 12 to mark the 1688 victory of King William III. The Orange Order parades have become a key source of tensions in Northern Ireland because they pass through predominantly Catholic neighborhoods and towns. The controversy over the events intensified during the 1990s peace process, and the parades continued to generate conflict even after the 1998 Good Friday peace agreement, sometimes even resulting in violence. In a bid to prevent further acrimony, a “parades commission” was set up in Northern Ireland and was authorized to impose restrictions on controversial parades and to order route changes.
Research in this field also cites Hindu religious parades in India that pass through Muslim neighborhoods and contribute to increasing ethnic tensions between these two groups. Various incidents of controversial symbolic rituals have triggered violent clashes in Israel over the years, as well, often taking a toll in human lives.
FOR EXAMPLE, in August 1984, the chair of the Kach movement, Meir Kahane, announced he would visit the Arab town of Umm el-Fahm in order to present his transfer plan, prompting a mass protest and clashes with police. The Temple Mount/Al-Haram Al-Sharif has served as an arena for similar incidents. In October 1990, the “Temple Mount Faithful” movement announced plans to lay the cornerstone of a third Jewish temple at the site. Police prevented the group’s access to the site, but rumors of the planned ceremony sparked riots and clashes with police, killing 17 Palestinians and wounding 200.
A decade on, in September 2000, opposition leader Ariel Sharon conducted a highly publicized visit to the Temple Mount under heavy guard, sparking the conflict anew and signaling the start of the Aqsa Intifada. Although the Palestinian leadership urged Israel to ban the planned visit, the government and police decided to let it proceed. The visit followed the failure of the Camp David summit and the collapse of the talks with the Palestinians on the future of Jerusalem.
The Sharon visit illustrates the manner in which controversial rituals serve as tools in the domestic political game. The organizers of such events strive to mobilize public support for their cause, to draw attention and pressure the government into adopting a more militant approach to the conflict. Decision-makers must choose whether to ban such events or curtail them, thus facing domestic fallout and accusations of “weakness” or violation of the right to free speech – or to allow these events and risk escalation, violence and loss of control.
At first glance, the organizers of these events seem to be winners no matter the government’s decision, because they draw media and public attention and embarrass the government. However, they often ultimately emerge as losers. Rather than accomplishing their goal of highlighting sovereignty, control and superiority over a particular site, the ensuing violence and the loss of control in these events actually intensifies the discourse on the sensitive and controversial nature of the site.
Experience also shows that these steps often have the opposite of the desired effect and undermine control of the targeted arena, as researcher Yitzhak Reiter contends in his study of the power struggle on the Temple Mount. For example, Sharon’s provocative visit to the Temple Mount in 2000 eventually led to closure of the site to non-Muslim visitors for three years.
We are currently at a particularly sensitive point in time, given the volatile situation in the Israeli-Palestinian arena in the West Bank, Jerusalem and Gaza, internal Palestinian tensions and a fragile crisis-prone political situation in Israel characterized by extreme polarization and instability. Against this background, the new government’s opponents seem to be attempting to use various controversial rituals in the Israeli-Palestinian arena as a political tool to embarrass and challenge the ruling coalition. This is a dangerous game that requires the government’s attention and monitoring to disarm potential political land mines, and proactive measures to ensure that such events do not veer out of control and result in further escalation.
Prev
All Publications
Next