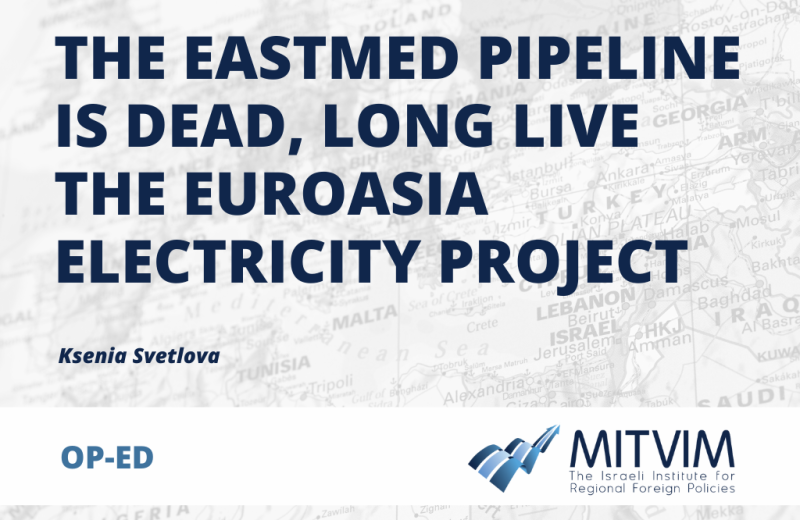 Plan to send Israeli gas to Europe under the sea in trouble, but power grid hookup is looking good

After a decade of excitement at the prospect of moving Israeli gas to Europe through the EastMed pipeline, the United States has pulled its support for the ambitious project. Some experts believe this news announcement caught Israel, Greece and Cyprus by surprise, and that it could affect the political map as well as the future of energy in the Mediterranean.

“I believe that this announcement was surprising,” said Gabriel Mitchell, an expert on Eastern Mediterranean energy and geopolitics and director of undergraduate studies for the University of Notre Dame at Tantur in Jerusalem.

“The reason we know it’s surprising? Because the message came through some document that was actually a non-paper. It was not something official that came from the State Department, while it was expected that this kind of message would come from the US ambassador in Greece,” Mitchell told The Media Line.

“During the last week the ambassador had plenty of meetings with officials in Greece and in the US to reassure them that there is in fact no change in US policy,” he added.

Still, everyone knew that there are quite a few economic issues with this project, Mitchell said.

“During the past decade the Greeks, the Cypriots and even the Israelis talked very little about these challenges and used the idea of this project in order to advance their geopolitical interests. Also, the Europeans knew that the EastMed [pipeline] was difficult to implement, but still supported the idea, rather than pull out and upset the Greeks and the Cypriots,” he said.

The EastMed pipeline was designated under a European Commission regulation as a “Project of Common Interest” in 2013, and the commission contributed more than €34.5 million ($38.9 million) to complete technical, economic and environmental studies in 2015-2018.

In January 2020, the accord to construct the pipeline was signed in Athens by leaders of Greece, Cyprus and Israel. The pipeline was to be approximately 1,180 miles long and have a capacity of 10 billion cubic meters per year. Its cost was estimated at approximately €6 billion ($6.86 billion).

Michael Harari, a policy fellow at Mitvim – The Israeli Institute for Regional Foreign Policies and a former ambassador to Cyprus, believes the Americans in their announcement said out loud something that everybody knew for a while, the project is not practical.

“Its importance was mainly political and it achieved its purpose – the alliance between Israel, Greece and Cyprus is very strong. The Americans believe that this announcement can contribute to alleviating tensions with Turkey, and there is also another consideration – the US also sells gas to Europe,” Harari told The Media Line.

“However, most importantly, the decision emerged from the understanding that this project is unrealistic and that the decision to pull out from it will not come at the expense of Greece and Cyprus,” he said.

Ankara, which has long opposed the EastMed project, didn’t try to hide its pleasure at the news. President Recep Tayyip Erdoğan was quoted as saying that the American decision was based on the high cost of the pipeline.

“This project is not something that can happen. They [the United States] carried out all the analyses, and they saw it had no positive sides. In other words, the cost calculations don’t add up,” Erdoğan said, according to the Turkish NTV news channel.

He added that his country is still up to discussing the possibility of flowing Israeli gas to Europe through Turkey, and that Israeli President Isaac Herzog might soon visit Ankara.

Israeli-Turkish relations have been strained for the last few years due to Erdoğan’s support of Hamas and harsh criticism of the Jewish state. Recently, however, the Turkish president hinted that relations with Israel will get warmer “soon.”

Harari believes that while Jerusalem will welcome dialogue with Ankara, there will be no quick advancement of the project proposed by the Turks.

“The first reason is the low level of trust between the countries. Even if the ambassadors return [to Tel Aviv and Ankara], it will still take years to stabilize the relationship. And the second reason is that Israel, as well as Cyprus, directs its gas [from their offshore reservoirs] to Egypt. Of course, theoretically there is enough gas for everyone, but if Israel has to choose between Egypt and Turkey, it’s clear which one it will choose,” Harari said.

The future is in the cable

For now, it seems that by pulling the plug out of the EastMed project, the US is giving Turkey some diplomatic breathing space in order to mend the strategic relationships that went sour in recent years.

Meanwhile, Mitchell says that the Israeli-Hellenic alliance is strong and has a life of its own now.

“The ties are solid and many things are happening in this sphere. Israel’s Elbit [Systems defense electronics firm] signed a huge deal with the Greek army, there is trade, broad diplomatic and defense relations. And there is also the power cable project, which is no less significant, and the truth is that it will be even more significant than the gas streaming. The plan is to lay a 1,200-km.- [750-mile]-long power cable from Greece to Cyprus and Israel so that the partners can sell electricity to neighbors. If Israel needs more electricity, it could buy it from Europe,” Mitchell said.

The memorandum of understanding on the 1,200-km. EuroAsia Interconnector (EAI) was signed last year by the energy ministers of Israel, Cyprus and Greece. The project was also designated by the European Commission as a key “Project of Common Interest,” making it eligible for EU financing. The first phase is expected to be operational by 2025, when all three states will be linked to energy grids in Europe and in Asia.

“The success of the infrastructure projects is largely dependent on funding and timing. During this transition period between fossil fuels and green energy, the EU’s prioritization of renewables enabled the EAI to get off the ground,” Mitchell said.

“In contrast, Eastern Mediterranean hydrocarbons may be victims of the moment; technological advances enabled their discovery but market oversaturation and the rise of renewables have limited international interest in costly pipelines,” he said.

Mediterranean
Prev
All Publications
Next