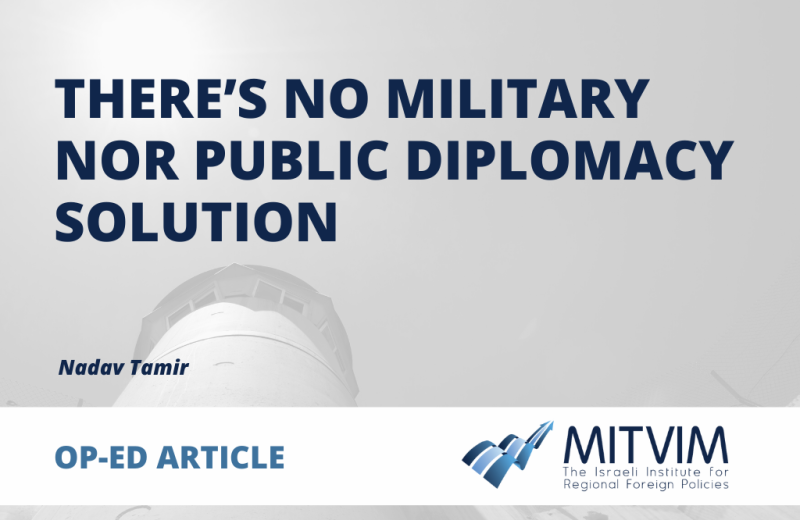 Now that a ceasefire has been reached, we should try to understand why we return to the same futile pattern every time. As in every previous exchange of blows between Israel and Hamas, the Israeli media and most of the public are busy expecting an Israeli victory in the military campaign and in the battle for international public opinion. In both cases there are temporary tactical successes and long-term strategic losses. The public and the media are unaware of the strategic failure of the political echelon. The public demonstrates excessive admiration for the army and on the other hand make allegations against the Foreign Ministry for international criticism.

The two organizations — the IDF and the Foreign Ministry — are executing their tasks. The army demonstrates capabilities in the field of air force strikes on Hamas targets and also in the protection of the country’s citizens by the Iron Dome and warning systems. The Ministry of Foreign Affairs has succeeded in its diplomatic efforts in providing the Israeli government with a wide range of latitude and international legitimacy for action.

In both cases, however, this tactical success fails to translate into sustainable achievement due to a lack of strategy. The IDF and the Ministry of Foreign Affairs do not set the policy, but they should boldly say to the political leadership that they are unable to achieve the long-term goals that are expected of them.

As long as the issue at hand is the narrow-angle of Israel’s right to defend itself against missile terrorism aimed at its citizens, there are successes, because it is a worthy and legitimate goal. But strategically there are no solutions to the Palestinian issue, of which Hamas is a part, neither in the military nor in PR.

We always use our sophisticated army as someone who holds a hammer in their hand and sees every problem as a nail. We nurture this army and each time we send it to another round with Hamas in which it demonstrates its formidable capabilities, but solves nothing. Military officers are constantly interviewed in the media today and detail in masculine voice techno-tactical issues and excite the public’s imagination about military capabilities.

On the other hand, we do not invest at all in the diplomacy and at the same time make allegations to the diplomats that there is criticism of Israel in world public opinion. So let me tell you a secret, there is no way to explain our policy. Not the lack of diplomatic action, not the prolonged occupation without a horizon, not the deliberate weakening of the pragmatic elements in Palestinian society, not the discriminatory law of absentee property in Jerusalem and not the violation of the status quo on the Temple Mount that is used by settler associations under government auspices that set the entire region on fire.

The Israeli public treats this campaign like its predecessors from a narrow-angle of a legitimate democracy’s confrontation with a terrorist organization, but the world sees shocking images from Gaza of the victims of these repeated rounds – dead and wounded civilians including many children (who for some reason the Israeli public does not see) and asks – what did you do to prevent this round of violence? What have you done in the diplomatic sphere? What did you do to prevent the continued occupation? What did you do to achieve justice for the residents of East Jerusalem and equality for the Arabs of Israel?

I feel very connected to our army as a former officer and parent of children who do and have done meaningful service. My heart also goes out to my former colleagues the diplomats, who are not less talented than the generals of the army and work around the clock in the current campaign and throughout the year. Meet, for example, the head of the Foreign Ministry’s public diplomacy division, Noam Katz, and the speaker, Lior Hayat, and you will quickly understand that these are super talented people, whom any foreign ministry would be blessed with. This is also true of all “anonymous soldiers” who deal with public opinion and media at the headquarters in Jerusalem and at about 100 of our missions abroad. They are forced to engage in useless “hasbara” (the Hebrew term for advocacy or propaganda) of unexplained policies.

Let them engage in true diplomacy and you will see results. Give them a political directive to engage in peace agreements with our neighbors as the Foreign Ministry did during the Rabin and Peres governments and you will see them demonstrate their impressive capabilities.

Both the best military in the region nor the weakened Foreign Ministry will not be able to prevent another round, will not be able to substantially weaken Hamas and will not bring peace and security to Israelis and the region without a coherent foreign policy to promote long-term arrangements. We must not fall into the trap of right-wing elements trying to convince us that we are doomed to live on our sword while maintaining a two-generation occupation regime for millions and that this baseless policy, which primarily harms our existence as a democracy, can be explained.