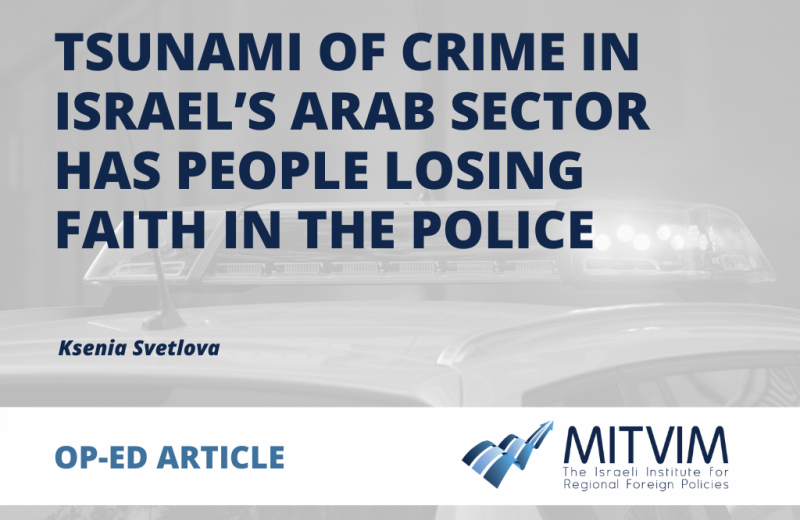 ‘We have a new generation of young people who do not work or study,’ Arab activist says

Ninety-six Israeli Arab citizens, men, women and children, have been murdered since the beginning of 2021. Some were targeted in their car or home; others became accidental victims of other peoples’ fights. Today the wave of crime is also hitting the “mixed cities” where Jews and Arabs live together, and in some of these places, Jews, losing faith in the police, are organizing self-defense groups.

Why is Israel, a country with one of the ablest security forces in the Middle East, losing its battle against crime?

“Once I was at a wedding in my city when one of the top criminals entered the hall. The singer immediately started praising him, and a few young men reached out to him and arranged a place of honor for him. It seemed that they respected him a lot,” Thabet Abu Rass, co-director of the Abraham Initiatives, which promotes Jewish-Arab coexistence, told The Media Line.

Abu Rass resides in Qalansuwa, an Arab city in central Israel. He knows some of the victims who were shot or threatened in recent years personally; in fact – everybody does.

“They shot a municipal general manager a few months ago, and during the last municipal elections, the leading candidate was threatened. In the end, he decided to withdraw his candidacy. Actually, sometimes we know who is going to get killed by the end of the year,” Abu Rass says.

Today, when hardly a day goes by without a shooting, a homicide, or a violent fight, it’s impossible to ignore this terrifying phenomenon. It’s widely reported in the Israeli media and occasionally the news from the raging crime in the Arab sector opens the news reports. Then the hashtag #Arab_Lives_Matter trends on the Israeli Twitter segment for a few days.

However, many social activists, members of Knesset and residents of Arab cities bitterly say that for years the government preferred to look the other way and ignore the growing problem.

“It was building up for quite a few years. Ten years ago I heard my friends say, ‘You must intervene in this matter before it’s too late,’” says Mossi Raz, a Meretz MK and longtime peace and coexistence activist. “We did not fully understand how fast the situation would deteriorate, and Israeli and Jewish society, in general, was less concerned. Only today that is starting to change.”

Raz rejects the claim often voiced in Israel that the killings have roots in Arab culture.

“If it is a cultural issue, why was the situation entirely different 30 years ago? Why is the situation different in Jordan or the occupied territories?” he asks, speaking to The Media Line.

“We are talking about powerful criminal gangs that thrive on extortion and protection, about neglect that lasted for too many years. In fact, some of these gangs also got involved in violent events this year, mainly in Acre and other cities in the North in May [at the time of the most recent Israel-Gaza war – K.S.]. I heard that they were burning the businesses of the Jews who declined to pay protection,” Raz says.

During the 1990s, organized crime thrived in Israel. Netanya, Ashdod, Lod and Nahariya became battlefields as Jewish criminal gangs settled their scores. It took years of struggle and investment of human and financial resources, but eventually, the state got the upper hand.

However, the situation in the Arab sector is and was always different. And today the state that is bombing nuclear facilities in neighboring countries is unable to prevent the next killing in Umm al-Fahm or Ramla.

“Many of the Arab municipalities are in fact exterritorial and the state doesn’t operate there. After the fateful events of October 2000 [13 Arab protesters were fatally shot by the Israeli police] and the report of the Or Commission [of Inquiry] that clearly stated that the Israeli police treats Arabs as enemies, the police decided to practically withdraw from the Arab sector,” says Abu Rass.

“After a few years, we realized that the vacuum that was left was quickly filled by crime. Today it is a catastrophe. When the police are interested – they get results. When they enforce the corona regulations, suddenly we see that they are focusing on Arab cities, but hardly act on crime and murders. The Arab society refuses to believe that the State of Israel is incapable of figuring out this issue and finding a solution,” he says.

Not all crime is organized

Afif Abu Much, a publicist and political activist, tells The Media Line, “According to the state comptroller’s recent report, over 30% of the Arab youth in the Negev area are school dropouts. Where do these kids go? They are certainly not going to work in car repair. They use social media, they see how other people live, and they want fast money.”

“We have a new generation of young people who do not work or study. They are sitting in the cafés and just spend their time there. It’s very easy to lure an unemployed young person into working for organized crime. They get them a car, a weapon, a salary, and now we have a generation of takhikha [Arabic for ‘shooters’],” says Abu Much.

However, not all shootings and murders in the Arab sector are related to organized crime. Sometimes fights erupt because of families fighting over a plot of land or even smaller issues, Abu Much continues.

“I believe that there is a problem with education. A person who disrespects the law, who is not taught respect and recognizes no authority, will easily break the law. Our society is changing, our cities are changing. We are not the same society we were 30-40 years ago. There is a process of modernization, and the traditional authority is no longer working,” he says.

“Also, the population of our cities is changing – suddenly families of collaborators [with the Shin Bet or the police] are settling down in some places in large numbers, and other families are running away from feuds and conflicts.”

Abu Much, as well as many Arab educators, members of Knesset and social activists, calls for the government and the police to act as soon as possible. He says somberly, however, that the problem will probably only be solved when the violence spills over sufficiently to the Jewish sector.

No magic remedy in hand

MK Ghaida Rinawie Zoabi (Meretz) places the blame squarely on the government for the failure in fighting crime in the Arab sector. Her colleague Raz believes it’s still too early to tell whether the efforts of the current government that is led by Naftali Bennett will bear fruit, but says that Public Security Minister Omer Bar-Lev of the Labor Party is dedicated and involved.

“He cares; there is no doubt about that. And they started collecting the illegal weapons here and there already. However, it is clear that the pace should be much faster. The police should prepare for tons of criticism because they will be enacting unpopular policies,” Raz says.

Abu Much suggests that the solution should come not only from the police but also through addressing difficult social issues, for example improving education, employment options and housing.

He also rejects the involvement of the Shin Bet security service in fighting crime in the Arab sector.

“Do they really need the Shin Bet to collect an illegal weapon from a 20-year-old? We need equality, and we need a police force that treats us equally,” Abu Much says.

Abu Rass, whose Abraham Initiatives organization has been monitoring the situation in the Arab sector for many years, believes in synergy among three partners – the state, the police and the Arab leaders.

“This is a complex issue, and that’s how it should be treated. There is already a program to fight crime that was approved by the previous government, budgeted at NIS 2.5 billion [$775 million, over five years]. Now we are waiting for the budget to get started. But everyone has to understand that this is only the beginning. After the neglect that lasted for many years, it’s time to act. If we don’t, people will continue to pay the price,” says Abu Rass.

The Knesset has until November 4 to approve the state budget, or else early elections will be automatically triggered.

The coalition, with its razor-thin majority, fears that the fierce criticism expressed by its own members such as Rinawie Zoabi regarding its policies on the novel coronavirus and violence in the Arab sector will result in destabilization and even revolt during the fateful budget votes.

Many Israeli citizens, both Jews and Arabs, are hugely skeptical of the ability of the police to fight crime.

One symptom of this is the WhatsApp anti-crime groups recently created lately in the city of Beersheba, where people report violence and sexual harassment, and others come to their aid. Another symptom is seen in the Arab cities, where gangsters often serve as mediators between families who prefer not to turn to the police.

The government needs to address this situation quickly, before the violence once again spills over into street fighting between groups of Jews and Arabs, as happened in May, during IDF’s Operation Guardian of the Walls against Hamas in the Gaza Strip.