Turkey FM visit to Israel a sign relations are warming 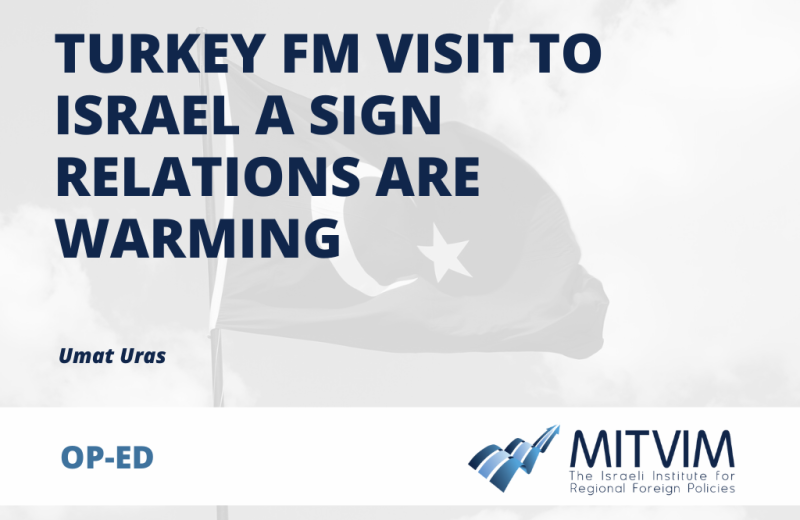 Mevlut Cavusoglu’s trip to Israel this week will make him the first Turkish foreign minister to visit the country in 15 years – the latest step in a rapprochement between the countries after years of stormy ties.

Cavusoglu, who is expected to be accompanied by energy minister Fatih Donmez, is scheduled to meet his counterpart Yair Lapid on Wednesday, a day after holding talks with Palestinian officials.

Energy sector cooperation is expected to top the agenda, with Ankara expressing its willingness for a partnership between Israel and Turkey in a project that could carry Israeli natural gas to Turkey, and then potentially on to Europe.

But a wider issue is also expected to be discussed –  the re-establishment of diplomatic ties at the ambassador level, after Turkey expelled the Israeli ambassador in 2018, following the Israeli killing of almost 60 Palestinians in protests against the opening of a United States embassy to Israel in Jerusalem.

That was the culmination of a continuing period of poor relations, which had been difficult since the late 2000s. The two countries traded frequent accusations over Israel’s occupation of Palestinian territories and treatment of Palestinians, as well as Ankara’s support for Hamas, which governs the blockaded Gaza Strip.

They have also disagreed over various other regional issues, such as the 2013 coup in Egypt, the 2015 Iranian nuclear deal, the 2019 withdrawal of US troops from Syria and Turkey’s military operations in the same country.

Yet it appears as if the two sides are willing to overlook this. In March, Israeli President Isaac Herzog, who predominantly holds a ceremonial position, made a landmark visit to the Turkish capital, Ankara – the first such visit since Shimon Peres’ trip in 2007.

Herzog and Turkish President Recep Tayyip Erdogan both said they wanted to normalise ties, with Erdogan also stressing the importance of energy cooperation between the governments going forward.

Phone conversations and letters between the two leaders have followed since, despite Erdogan’s often forthright public condemnation of Israeli actions against the Palestinians.

Taha Ozhan, the former chairman of the Turkish parliament’s foreign affairs committee, said that Turkey and Israel’s current goal is to establish efficient diplomatic ties again and see if it is possible to work together in certain areas thereafter.

“Turkey and Israel are aware that there is a need for them to talk to each other over regional issues, from Syria and the Eastern Mediterranean to issues related to the Arabian Gulf,” Ozhan, who is also an academic at the Ankara Institute, told Al Jazeera.

“However, much more time is needed for them to establish trust and work together in foreign policy areas, amid so many disagreements and considering the situation of Palestinians is only getting worse,” Ozhan said.

He added: “Restoring diplomatic relations might be an initial step for more dialogue and eventually lead to establishment of a positive policy agenda and deeper ties. No one should expect a shortcut to normalisation … especially during the election year in Turkey.”

Turkey’s desire to acquire Israeli natural gas was apparent in statements coming from Ankara even before the invasion of Ukraine by Russia, a country both Turkey and Europe heavily rely on in terms of energy.

“We can use Israeli natural gas in our country, and beyond using it, we can also engage in a joint effort on its passage to Europe,” Erdogan said in February.

In another statement in March, he said “one of the most important steps we can take together for bilateral ties, I believe, would be natural gas,” adding that Prime Minister Naftali Bennett, whose government holds executive power in Israel, could visit Turkey as part of the process.

Erdogan and Bennett talked on the phone last November in the first such call in years.

According to Galip Dalay, an Associate Fellow at Chatham House in Britain, cooperation among other Eastern Mediterranean countries, namely Greece, Cyprus, Israel and Egypt, has motivated Ankara to fix its ties with the latter two.

“Turkey does not want countries around it to align themselves with Greece and Cyprus because of their own disputes or frustrations with Turkey. This seems to be why Ankara is reaching out to Egypt, Israel and even to the United Arab Emirates to fix strained relations,” he said.

“The reason for the cooperation among these governments, which puts Turkey in a lonely position, is not the conversion of their interests, but their anti-Turkey positions,” he told Al Jazeera.

But even if Turkey and Israel’s positions do become closer, it does not mean that a deal is around the corner, nor that Tel Aviv will abandon Greece and Cyprus.

Nimrod Goren, the chairman of the Israeli Institute for Regional Foreign Policies, told Al Jazeera that cooperation over a natural gas pipeline between Turkey and Israel is still not likely any time soon.

“Energy cooperation with Turkey is important for Israel and has much potential, but it does not need to be on the natural gas front,” Goren said.

“Israel has other regional partners in natural gas, such as Greece, Cyprus and Egypt,” he said, adding that Israel would be more comfortable cooperating in other areas with Ankara, such as renewable energy.

Turkey and the breakaway self-proclaimed Turkish Republic of Northern Cyprus (TRNC), recognised only by Ankara since 1983, have been at odds with European Union members Greece and Cyprus over energy resources and jurisdiction in the waters in the Eastern Mediterranean.

The internationally recognised government of Cyprus has signed exclusive economic zone agreements with Egypt and Israel and handed hydrocarbon exploration and exploitation licences to international companies since the 2000s.

In response, Turkey signed similar agreements with the TRNC and Libya in 2011 and 2019 respectively.

Turkish and Greek vessels have explored for hydrocarbons in the disputed waters between Turkey, Greece and Cyprus over the last few years, leading to increased tensions between Athens and Ankara.

Taha Ozhan said that economic and trade relations between Israel and Turkey have historically carried on, despite the political problems that have existed.

“Both countries have been rational on the matter of the economy in the past. Energy ties should be evaluated in this context,” he said, adding that a wider deal in the Eastern Mediterranean would create benefits for the whole region.

Goren agrees that the Israeli and Turkish governments have been able to protect their diplomatic ties, and that, despite the tensions over the years, trade and tourism between the two countries were still at high levels.

“These [trade and tourism] are all far from the potential they can reach and fulfilling that potential can be achieved through moving to the ambassador level,” he said.

“The Palestinian-Israeli issue has always been the stumbling block impacting the level of Israeli-Turkish relations, but the sides should discuss how to contain their differences when dealing with each other,” Goren added.

Ties between Turkey and Israel have been shaky since the 2008-2009 Gaza War and the death of 10 civilians in an Israeli raid on the Turkish Mavi Marmara ship, part of a flotilla trying to breach the blockade on Gaza by carrying aid into the territory in 2010.

After years of frozen ties, a 2016 reconciliation agreement saw the return of ambassadors, but it collapsed in the wake of the Israeli response to the 2018-2019 border protests in Gaza, in which more than 200 Palestinians were killed.

Turkey recalled its diplomats and ordered Israel’s envoy out of the country in 2018, as bilateral relations hit another low.