Will Marwan Barghouti Be the Next Palestinian President? 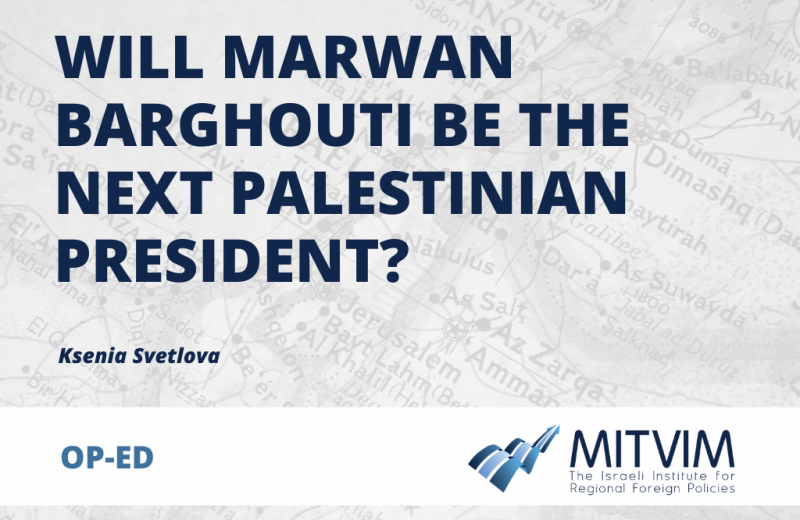 The first thing one sees after crossing the Qalandiya checkpoint from Jerusalem en route to Ramallah is a huge mural of Marwan Barghouti, the imprisoned Fatah leader who is seen by many Palestinians as the successor to Mahmoud Abbas.

Next to Barghouti’s portrait is that of the late Yasser Arafat. Placing these two figures together implies an obvious connection; both are revered for their struggles against Israel.

According to a poll of Palestinian public opinion conducted in September, if presidential elections were held for the Palestinian Authority and Mahmoud Abbas did not run, Barghouti would receive 41% of the vote; Ismail Haniyeh, the international leader of Hamas, would receive 17%; ex-Fatah leader Muhammad Dahlan, 5%; the leader of Hamas in Gaza, Yahya al-Sinwar, 4%; and Abbas’s confidant Hussein al-Sheikh only 2%.

It’s unclear when presidential elections for the P.A. will take place. Abbas, who was elected to office in 2005, postponed indefinitely the vote scheduled for May 2021. But this is not the only barrier facing Barghouti.

Once an energetic student leader from the West Bank village of Kobar, Barghouti rose to become a leader in Fatah’s military wing, and was arrested 20 years ago in Ramallah by the Israeli Defense Forces. He was tried and convicted on five counts of murder in an Israeli civilian court, unlike most Palestinians, who are tried in Israeli military courts.

He was found guilty of authorizing and organizing the murder of a Greek Orthodox monk, a shooting near the settlement of Givat Ze’ev in which an Israeli civilian was killed, and the 2002 Seafood Market restaurant attack in Tel Aviv in which three civilians were killed. Security sources in Israel said that among the documents the IDF found during raids on the Ramallah offices of the Tanzim (Fatah’s military branch) were memos that showed Barghouti’s direct involvement in planning terrorist attacks.

Barghouti claimed that he supported armed resistance to the Israeli occupation yet condemned attacks against civilians inside the 1967 Green Line. He refused to recognize the legitimacy of the court and waived his right to defend himself. The question of his release was widely discussed in Israel and the West Bank immediately after the trial. Yet in 2006, Knesset Member Avi Dichter, who had served as the director of the Israel Security Agency (Shin Bet), said sarcastically during a TV interview I conducted with him that “Barghouti can certainly expect an earlier release—after some 100 years or so.” Today his release seems no more likely than it did 16 years ago.

During the first years of his imprisonment, Barghouti remained active politically. He negotiated a unilateral truce declared by the main Palestinian factions in June 2003, during the Second Intifada. He drafted the so-called Prisoners’ Document in 2006 (in this document all imprisoned Palestinian leaders of all factions called to establish a Palestinian state within the pre-1967 borders and demanded the right of return for refugees). In 2007 Barghouti was involved in the creation of the Mecca Agreement that intended to heal the split between Fatah and Hamas.

In recent years, however, Barghouti has seldom made important statements on the burning issues that preoccupy the Palestinians. He often emphasizes in general terms the importance of national reconciliation, and just recently called for dates to be set for presidential and parliamentary elections. “The lack of elections for (almost) 20 years makes the Palestinians live in a dangerous political vacuum,” he explained in a letter to his wife Fadwa. Yet, he has not uttered a word about corruption or violations of civil rights in the P.A., the future of a two-state solution, or other issues.

While there is no doubt that for many Palestinians, including the youth, Barghouti is a powerful symbol of resistance, it is unclear how well the imprisoned leader would do in managing internal Palestinian politics. Sources in Ramallah say that while Barghouti has the sympathy of the street, he hasn’t been active or clear enough about his goals, ideology or agenda. Barghouti’s relations with the Fatah Party and the level of support that he enjoys there are also foggy.

According to senior analysts and friends who preferred to remain anonymous, “We knew who Barghouti was years ago. Little is known about his ideology today. He was a popular student leader and an aide of Arafat. But is he ready for the heavy burden of responsibility as president? Will he be able to unite the Fatah ranks? Or will he use this opportunity to just bargain his release out of jail?”

During the preparations for the parliamentary elections last year, Barghouti decided to run on an independent list with his wife Fadwa and Yasser Arafat’s nephew, Nasser al-Qudwa. Over the years, Abbas has successfully purged the leadership of both the Palestine Liberation Organization and the P.A. of Barghouti’s sympathizers. Apart from Barghouti, there are many Fatah contenders for the role of a successor to Abbas, such as Jibril Rajoub, Hussein al-Sheikh and probably Muhammad Dahlan, now based in the United Arab Emirates. Some Palestinian analysts predicted last year that parliamentary elections would lead to another victory for Hamas at the expense of Fatah.

From the Israeli perspective, Barghouti’s winning future Palestinian elections would be dangerous for several reasons. Since currently there is no scenario for his release, if Barghouti were elected president of the P.A., someone else would need to govern in his name. The chance of chaos and anarchy would increase and the P.A.’s legitimacy would continue to decrease, to the benefit of Hamas. At the same time, the international pressure on Israel would grow; Israel could find itself in the shoes of the South African regime that jailed Nelson Mandela. Interestingly, the Palestinian media rarely draw this comparison between the two men, while the international and Israeli press often make use of it.

In short, Israel would find itself in an impossible situation. The Palestinians also would be faced with the difficult reality of having a symbol of resistance instead of a political leader who is able to govern, negotiate and make deals. Combine this messy situation with the emerging far-right Israeli government and you get a perfect storm. In fact, a perfect storm may hit Israel and the P.A. whenever Abbas departs the scene and the battle for his succession officially starts.

Palestine / Israel-Palestine
Prev
All Publications
Next