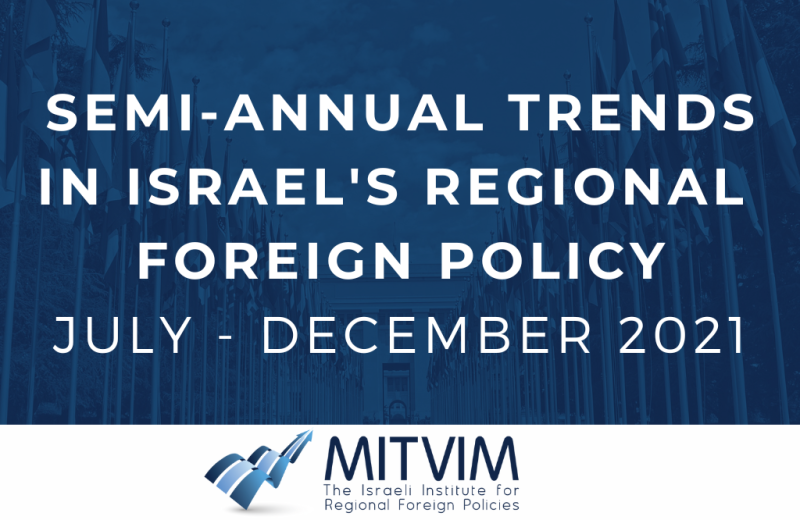 This document presents key trends in Israel’s regional foreign policy between July and December 2021. The new government, which took office in mid-June, worked to deepen the normalization with the UAE, Bahrain and Morocco and to strengthen relations with Egypt, Greece and Cyprus ; it continued to oppose a return to the nuclear agreement with Iran; succeeded in turning a new page in its relationship with Jordan; began to warm relations with the European Union and maintained ongoing dialogue with the US administration; renewed the dialogue between Israeli and Turkish leaders, and adopted a global integration policy to confront the climate crisis. The government’s decision to undertake measures to improve the daily lives of Palestinians eased harsh international pressure,

1. Israel renews dialogue with the Palestinian Authority, but declares it will not advance a peace process – Internal government disagreement over the Palestinian issue was reflected in its inconsistent policies; On the one hand, the government designed policies to strengthen the Palestinian Authority and the dialogue with it, but concurrently opposed negotiations that would offer a political horizon and promoted creeping annexation. Ministers from the center-left parties met with Mahmoud Abbas and their Palestinian counterparts to promote and deepen cooperation after years without such meetings. The government successfully implemented measures toimprove Palestinian lives in order to ease international pressure on the Palestinian issue. At the same time, however, creeping annexation, settlement construction, and the eviction of Palestinian families in East Jerusalem continued, and settler violence in the occupied territories set new records.

2. Israel cooperates with Qatar, Egypt and Hamas to rebuild the Gaza Strip and maintain calm – The Israeli government stated its intention to build a new mechanism for managing and rebuilding Gaza, which, among other things, would support an end to the internal Palestinian split, restore the Palestinian Authority to its position in the Gaza Strip, and prevent direct money transfers to Hamas. Within this framework, Foreign Minister Lapid presented an economic plan for the reconstruction of the Gaza Strip in return for increased security. As part of the newly formulated measures to assist and rebuild Gaza, Qatar transferred funds for humanitarian aid and diesel fuel to the Gaza Strip and provided Hamas with fuel through Egypt, Israel eased restrictions on employment and trade, and Egypt advanced reconstruction plans and mediated between the parties.

3. Israel seeks to restore relations with Jordan and turn a new page after Netanyahu – Israeli and Jordanian efforts to restore relations, which were restricted by Netanyahu, bore fruit. After years of severed ties between King Abdullah and Netanyahu, the King hosted Prime Minister Bennett and Ra’am Party Chair Abbas at his palace, and was in contact with President Herzog. The economy, energy and agriculture ministers of both countries met and signed cooperation agreements. Israel increased the quotas of water sold to Jordan, and enabled expanded trade between Jordan and the Palestinian Authority. Israel, Jordan and the United Arab Emirates signed an agreement in Dubai to promote water and energy exchanges, an initiative promoted by EcoPeace Middle East and an example of multilateral cooperation in the region. Jordan continued to emphasize its commitment to the two-state solution, and public opposition to normalization with Israel remained widespread.

4. Diplomatic and economic relations with Egypt expand, as does Egypt’s willingness for increased visibility – Security cooperation continued between Israel and Egypt in the Sinai, as well as cooperation in the Gaza Strip and in the energy and business fields. In an unusual move, Egyptian President a-Sisi hosted Prime Minister Bennett for a high-profile visit, increasing the visibility of relations with Israel, and Foreign Minister Lapid met with his counterpart in Egypt. Israel softened its travel alert on the Sinai, and examined options for expanding trade between the two countries. However, public opposition to normalization with Israel still dominated the Egyptian street, limiting the expansion of cooperation to additional areas.

5. Normalization process with the UAE, Bahrain and Morocco deepens, and formal agreements lay the foundation for broad-based cooperation – The government continued to lay a diplomatic and formal infrastructure for relations and cooperation with the normalization countries – the UAE, Bahrain and Morocco . Relations and high-level meetings previously restricted by Netanyahu were revived, ambassadors were appointed, and Israeli leaders visited the three countries. The developing relationships are characterized, unusually so for Israeli ties in the region, by significant weight given to the civilian and business dimensions, and with the broad and varied involvement of civil society. The normalization process demonstrated resilience in the face of challenges, such as Israel’s activities in East Jerusalem and steps to cancel an energy deal with the UAE in the face of domestic Israeli criticism. Morocco did not open an embassy in Israel, despite declarations that it would do so by the end of 2021.

6. Israel continues to publicly oppose a return to the nuclear deal with Iran while maintaining dialogue with the US – Israel persisted in opposing the Iran nuclear deal and continued its activity to counter Iran’s entrenchment in the region. The US-Israel Strategic Consultative Group, led by the two countries’ national security advisers, resumed its confidential dialogue. Israeli representatives continued to bring up Iran’s nuclear program as a key issue in their meetings with US officials and their European allies, sharing information on the progress of Iran’s program and warning against Iran’s negotiation tactics. A growing number of Israeli officials and experts expressed regret over supporting the US’ withdrawal from the original agreement with Iran.

7. The Israeli government focuses on improving ties with the US administration and return to bipartisanship – Israel launched an intimate, primarily confidential dialogue with the United States, including on issues of disagreement such as the Iran nuclear deal, the American consulate in East Jerusalem, the banning of Palestinian human rights groups, the NSO spyware affair, and relations with China, while taking care to avoid harming US interests. The new government also promoted dialogue with the liberal, non-Orthodox Jewish community in the US.

8. Israel bolsters ties with the European Union despite ongoing disagreement on the Palestinian issue – Foreign Minister Lapid continued his predecessor Ashkenazi’s efforts to strengthen ties with the European Union (EU), conducting one of his first foreign trips to Brussels, where he participated in a meeting of EU foreign ministers. Israel joined the EU Horizon research and development program, and signed additional cooperation agreements with the EU, but failed to bring about the resumption of the Israel-EU Association Council meetings. Israel strengthened its cooperation and bilateral dialogue with individual European states, while distancing itself from populist leaders and underscoring liberal-democratic values. Positive contacts were renewed with Sweden. Europe, for its part, did not exert pressure on the new government regarding the occupation and settlements, but adhered to its commitment to the two-state solution and to its policy of excluding the occupied territories from any agreements with Israel. The use of Israeli spyware provoked harsh criticism and prompted a diplomatic crisis with France.

9. Israel renews leadership dialogue with Turkey, and continues to bolster relations with Greece and Cyprus – Israel, Greece and Cyprus continued to deepen their cooperation, holding an additional summit meeting in Israel. Israel supported Greece and Cyprus against unilateral Turkish steps in the northern Cypriot town of Varosha. At the same time, dialogue between the leaders of Israel and Turkey was renewed, especially between Presidents Erdogan and Herzog, even as Israel clearly stated that the moves would not undermine its strong ties with Greece and Cyprus.

10. Israel declares a more serious attitude towards the climate crisis and its integration into foreign policy considerations – The Israeli government set targets and formulated plans for a shift to a low-carbon economy and instructed the National Security Council to include climate crisis issues in the annual assessment it delivers to the foreign affairs and security cabinet. Prime Minister Bennett and Minister of Environmental Protection Zandberg led a large Israeli delegation to the climate summit in Glasgow, and Israeli representatives took part in other international climate conferences, including the multinational forum being led by the special US Climate Envoy Kerry. President Herzog established anadvisory climate forum led by former MK Dov Hanin to promote regional cooperation on climate issues, and the Foreign Ministry adopted a green standard for its overseas missions.

11. Measures by the Foreign Minister and the new government to bolster the Ministry of Foreign Affairs deemed insufficient – Lapid’s appointment as Foreign Minister raised hopes for the ministry’s regeneration, stunted under Netanyahu. Officials from the dissolved Ministry of Strategic Affairs were incorporated into the Ministry of Foreign Affairs, new ambassadors were appointed, and following a long hiatus, a new training course was launched for administration cadets. However, subsequent criticism over Lapid’s political appointments arose, and employees expressed disappointment over their working conditions, launching a public campaign against him. There was a sharp decline in t he number of applicants to this year’s foreign service cadet training program.