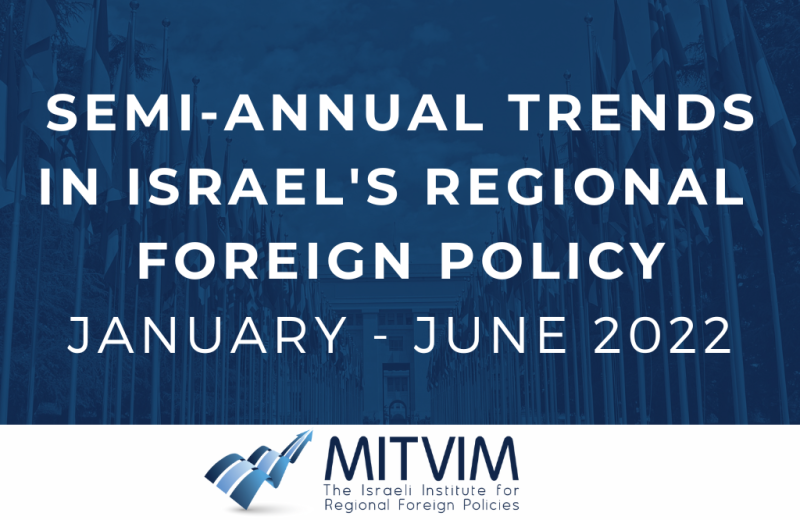 This document covers the main trends in Israel’s regional foreign policies from January to June of 2022, the second half of the Bennett-Lapid government’s first year in office. This period saw continued attempts to manage the conflict with the Palestinians so as to avoid escalation and risk destabilizing the coalition, already deeply divided on this issue. Facilitated by this policy and by the absence of significant international pressure, the process of creeping annexation continued, with policy being dictated by changes on the ground rather than by the government. Meanwhile, relations with the United Arab Emirates, Bahrain, and Morocco expanded and deepened, as did relations with Egypt. These efforts served to support the emergence of multilateral regional cooperation, including Saudi Arabia. Relations with Turkey continued to thaw, while the government continues to bolster relations with Greece and Cyprus. Israel refrained from adopting groundbreaking policy on the climate crisis, and failed to give the issue decisive weight in shaping its regional policies. While the Russian invasion of Ukraine prompted global outrage, Israel tried to maintain a non-committal position by refraining from a firm stance alongside Ukraine. At the same time, it strengthened security and energy cooperation with Europe, and benefited from the American need to reinvest attention in the Middle East.

2. Relations with the United Arab Emirates, Bahrain, and Morocco expanded and deepened, even in light of challenges posed by the Palestinian issue – Israel and the normalization countries – the United Arab Emirates, Bahrain, and Morocco – continued to deepen their burgeoning relations, signing a variety of cooperation agreements in the fields of security, trade, health, culture, and more, and overcoming with relative ease various obstacles as well as the challenges posed by the violence in Jerusalem and the Occupied Territories. It became increasingly clear that progress in relations between the countries stemmed from the partners’ intrinsic motivations with no need for any prompting or other American political or security incentives. Contrary to previous statements, relations with Morocco have not yet been formally upgraded to the ambassadorial level.

3. Israel was a leading partner in the formulation and institutionalization of a multilateral regional architecture – Israel led and hosted the Negev Summit with the intention of turning it into a permanent regional forum with working groups and the participation of the United States, Egypt, Morocco, the United Arab Emirates and Bahrain, with efforts to include Jordan as well. Given the perception of Iran’s actions as a common threat, Israel took part in multilateral security meetings in Egypt and the Gulf, in which Saudi Arabia and Qatar also participated, and promoted a preparatory process to strengthen cooperation with Saudi Arabia under US auspices and with Egyptian involvement.

4. While relations with Egypt improved, the process of restoring trust with Jordan stalled over the issues of Jerusalem and the Palestinians – Israel and Egypt have chosen to increase their cooperation beyond the areas of strategy, security, and energy to the fields of trade and the economy. Egypt served as a key partner in Israel’s diplomatic steps, including promoting regional cooperation in the Middle East and the Mediterranean Basin and the sale of gas to Europe. On the other hand, Israeli efforts to restore relations and trust with the Hashemite Kingdom and to draw it into various regional cooperation measures have not matured, as the violence and Israeli actions in East Jerusalem, on the Temple Mount/Haram al-Sharif and other policies towards the Palestinians continued to cloud and damage relations. Cooperation with Jordan did continue in the fields of water, security, and energy, which are perceived in Jordan as a necessary strategic cooperation even in the face of widespread public opposition to relations with Israel.

5. Israel continued to express public opposition to the nuclear agreement with Iran, but some voices expressed their support for advancing the deal – The Israeli government continued to conduct a dialogue with the Americans on Iran’s nuclear development in an orderly and discrete manner in light of Iran’s progress towards nuclear breakout capability resulting from its withdrawal from the 2015 agreement. While the Prime Minister and his associates expressed vehement public opposition to a return to the nuclear agreement, other voices in the foreign and defense establishment argued that a return to the agreement is the best alternative available, a view they shared with the Americans. Israel worked intensively to prevent a US administration decision to remove the IRGC’s from the list of terrorist organizations, and with the IAEA to exert increasing international pressure on Iran. Israel continued to mount intelligence-based operations against the Iranian nuclear program, slightly shifting its policy of full ambiguity by indirectly taking responsibility for some of these actions.

6. Ties with Europe strengthened in the shadow of the conflict in Ukraine and the marginalization of the Israeli-Palestinian conflict – The consequences of the war in Ukraine have led Europe and Israel to cooperate in the field of energy and security. Civil cooperation agreements and Israel’s accession to European treaties were promoted. Cooperation in the field of culture was strengthened with the decision to include Israel in the ‘Creative Europe’ program, subject to the exclusion of settlements, and additional agreements were promoted in other civilian areas. Europe has refrained from taking strong and public action against government policy on the Palestinian issue, but has also refrained from promoting the reconvening of the Association Council, despite growing support for the idea from European countries that previously opposed the move. Instead, the outdated 2005 EU-Israel cooperation program was extended for an additional three years.

7. The government maintained its efforts to avoid fully siding with either Russia or Ukraine in the ongoing war, hoping the price to pay would not be too high – Since the beginning of the war in Ukraine, Israel has refrained from fully and completely supporting Ukraine. At first, Israel tried to make exceptional and conspicuous use of the mediation tool to explain its failure to adopt the Western position towards Russia, and later used Russia’s presence in Syria and Russian Jewry as reasons for the ambiguity of its position. As part of this strategy, Prime Minister Bennett and Foreign Minister Lapid expressed different messages to different audiences around the world and in Israel, with Lapid clearly articulating Israel’s stand alongside Ukraine, and Bennett trying to avoid disrespect toward Russia. Israel sent humanitarian aid to Ukraine, but failed to provide weapons and defense systems. The Israeli government created obstacles for refugees and migrants from Ukraine, refrained from joining the global sanctions mechanism against Russia, and clashed with Russia in the Ukrainian context only when the latter invoked anti-Semitic arguments.

8. Israel continued to promote relations with Turkey, while taking care to maintain and cultivate relations with Greece and Cyprus – The gradually warming relations with Turkey were further enhanced by President Herzog’s visit to Turkey and a meeting with President Erdogan, reciprocal visits by the foreign ministers of both countries, and close and successful security cooperation in preventing Iranian terrorism against Israelis on Turkish soil. The two sides also decided to renew cooperation in civil aviation. Even in light of the challenges posed by the Israeli-Palestinian conflict and the clashes in Jerusalem during the month of Ramadan, the parties adopted measured and positive rhetoric towards each other. At the same time, Israel held a number of trilateral meetings with Greece and Cyprus at the executive and ministerial levels, as well as bilateral meetings with each, placing an emphasis on security and energy cooperation.

9. The Ministry of Foreign Affairs’ (MFA) standing in government was enhanced but remained weak in structure and budgets – Minister of Foreign Affairs Lapid’s role as a major political player led the MFA to take a more significant role in shaping and executing Israel’s foreign policy. Coordination was achieved between the Prime Minister’s Office and the MFA regarding their respective purviews and issues, and the presidency was widely used to take an active part in promoting Israel’s foreign policy, due in part to President Herzog’s willingness to effectively utilize his office. At the same time, the structural and budgetary problems of the Ministry of Foreign Affairs persist, and an ongoing labor dispute has not been resolved.

10. The climate crisis has not gained much weight in shaping Israel’s foreign policy – Israel has not adopted significant steps to deal with the climate crisis in the long term through advanced legislation, regulatory changes, or regional and international cooperation. The Israeli government, which pledged serious attention to these issues, has chosen to promote short-term fossil fuel-based energy cooperation (vis-à-vis Egypt, Europe, and even Lebanon) and has even expanded its investment in gas reservoirs in its exclusive economic zone. This fact stands out in light of the scheduled international climate conferences in Egypt this year and in the Emirates in 2023. President Herzog continued to promote the idea of a climate-based regional partnership in his talks with regional leaders and through the climate forum he established.