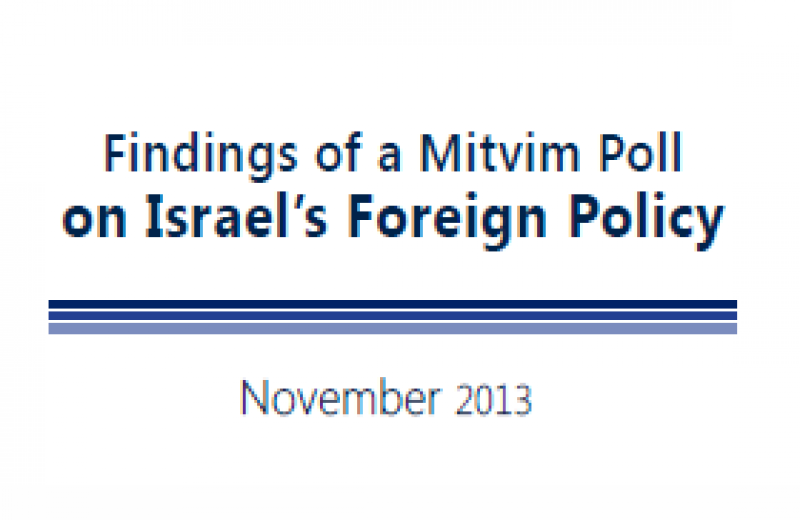 Findings of a Mitvim Poll on Israel’s Foreign Policy, November 2013

The majority of the Israeli public believes Israel’s foreign policy is more reactive than proactive and that it is not conducted according to clearly defined principles. A recent poll of Mitvim – The Israeli Institute for Regional Foreign Policies found that the Israeli public thinks the country’s foreign policy relies too much on its relationship with the US, and agrees that Israel should use more diplomacy instead of force. The majority of the public recognizes a need to involve the Arab citizens of Israel in a more central role in improving Israel’s relations with other Middle Eastern countries, and agreed that incentives from the international community will be more effective for mobilizing support for the peace process rather than sanctions. The poll findings show that most of the Israeli public, and especially the Arab sector, thinks Israel should offer assistance to other countries in promoting peace processes, based on its own experience throughout the years. Significant public support is given to assist Turkey in the advancement of its peace processes with, for example, Cyprus, the Kurds, or Armenia, as part of the mending of Israeli-Turkish ties. The poll shows that the Israeli public is divided over whether Israel belongs more to Europe, the Middle East, or both. The poll was initiated by the Mitvim Institute and was conducted by the Rafi Smith Institute on28-29 October 2013 among 500 men and women, as a representative sample of the Israeli adult population (Jewish and Arab sectors). The margin of error is 4.5%.

According to Dr. Nimrod Goren, Chairman of the Mitvim Institute, “The poll findings show that the Israeli public is interested in a new type of foreign policy, one that differs from the period Avigdor Lieberman’s previous term as Israel’s foreign minister. Israel needs a new foreign policy paradigm that regards peace and regional belonging as top-priority national projects, emphasizes engagement and cooperation, values pluralism and tolerance, seeks benefits in Israel’s unique multi-regional location, is open-minded towards the international community, and seeks opportunities for the improvement of regional relations”. Dr. Ehud Eiran, from the Mitvim Institute and Haifa University, claims that “it is symbolic that the poll is published in the month of November, when Israel marks the Balfour Declaration and the UN resolution regarding the establishment of a Jewish state. These events marked a change in the discourse about the return to Zion – from a discourse based on biblical promise, to one based on international law and on interaction with the international community. Today, a majority of Israelis want to belong to the family of nations, and to stop being a ‘people dwelling alone’. In contrast to Israel’s traditional policies, the poll findings show that most Israelis want their country to be a more integral part of the regional and global systems”.