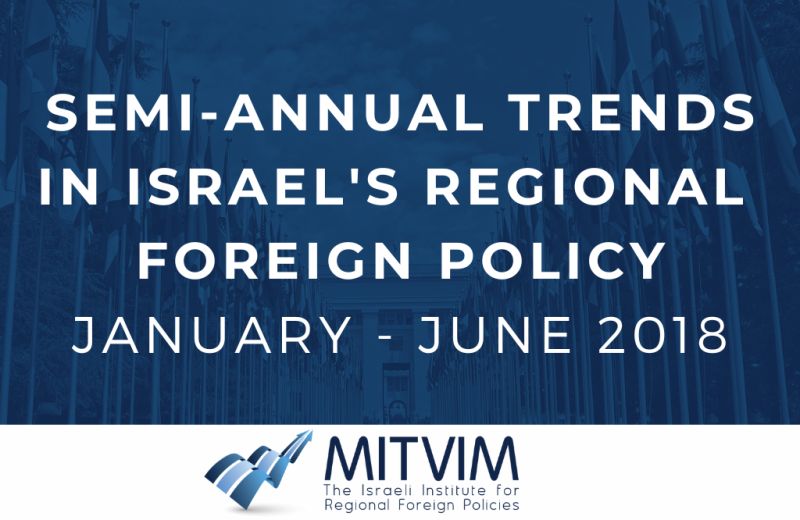 This document briefly outlines major trends in Israel’s regional foreign policies over the past six months. It is based on the Mitvim Institute’s monthly reports that cover ongoing developments in the Israeli-Palestinian peace process/conflict, Israel’s relations with the Middle East, Europe and the Mediterranean, and the conduct of Israel’s Foreign Service.

1. Attempts to influence the American peace plan – Israel maintained a relatively low profile with respect to the peace plan reportedly being developed by the Trump administration, with government representatives avoiding criticism of the initiative. At the same time, Israel made diplomatic efforts vis-à-vis the US to influence the content of the plan and to ensure coordination with the American administration regarding it.

2. A focus on economic and security cooperation with the Palestinian Authority, while pushing aside the peace process – Israel continued to criticize the Palestinian Authority, describing Palestinian President Abbas as an obstacle to peace rather than a partner. In the absence of peace negotiations, Israel’s relationship with the Palestinian Authority focused on economic aspects, under the leadership of Israel’s Ministers of Finance and Economy, as well as on maintaining security coordination. 3. Efforts to relocate foreign embassies to Jerusalem – Israel endeavored to leverage Trump’s declaration on Jerusalem and decision to move the American Embassy to Jerusalem. It made efforts to persuade additional countries to move their embassies to Jerusalem – with an emphasis on Central and South American nations, as well as East European countries – and was successful in the cases of Guatemala and Paraguay.

4. Participation in international fora regarding Gaza – While continuing the siege over Gaza and adopting a strong hand vis-à-vis a series of protests in the Gaza Strip, Israel tried to contain the humanitarian crisis there, while supporting US efforts to weaken UNRWA. It participated in international fora debating how to provide aid to Gaza, which were led by the donor countries and the US, and were conducted in partnership with Egypt and the Gulf States.

5. Working to marginalize Iran in Syria and to cancel the Iran nuclear deal – In light of the fighting in Syria and the growing Iranian presence there, Israel took military action against Iranian targets in Syria, and increased its diplomatic efforts to ensure coordination with Russia. Israel encouraged the US to leave the Iran nuclear deal and to avoid a withdrawal from Syria. It pressured key EU countries (unsuccessfully) to join the American decision, and conveyed deterring messages to Iran through them.

6. Restoration of ties with Jordan – Israel achieved an agreement with Jordan to end the crisis that erupted between the countries in July 2017. Israel subsequently dispatched a new ambassador to Jordan, and the Israeli embassy in Amman resumed full activity. Although differences between the countries remain on issues related to the IsraeliPalestinian conflict, the agreement enabled a meeting between Prime Minister Netanyahu and King Abdullah and strengthened bilateral cooperation.

7. Criticism of the EU and working to deepen disagreements between its members – Israel adopted a more critical line towards the EU, including the casting of accusations and insults by Israeli officials towards Brussels, and questioning the importance of the EU for Israel. In parallel, Israel endeavored to deepen and utilize the existing divisions among EU member states regarding the Israeli-Palestinian conflict, in order to prevent the EU’s from reaching the required consensus on actions and statements.

8. Boycotting Austria’s Freedom Party and cooperating with the Visegrád Group – Following discussions in the Knesset and the Israeli Ministry of Foreign Affairs (MFA), Israel chose to boycott Austria’s far-right Freedom Party due to anti-Semitic characteristics. Simultaneously, Israel continued to nurture cooperation with the Visegrád Group (the Czech Republic, Hungary, Poland and Slovakia) despite the fact that leaders of these countries are pushing their states away from liberal democracy.

9. Stalemate and deterioration in relations with Turkey – Crises in East Jerusalem and Gaza led to harsh Turkish criticism of Israeli policies, to a stalemate in the Israel-Turkey reconciliation process, and eventually to a deterioration leading to the return of ambassadors. While economic relations between the states showed signs of improvement, the possibility that Israel will export gas to Turkey became less feasible. The countries currently lack a shared agenda that would facilitate greater cooperation.

10.Deepening and broadening the alliance with Greece and Cyprus – Israel, Greece and Cyprus deepened their alliance through meetings of leaders and top officials, joint steps regarding natural gas, military exercises, and cooperation on environmental, economic, and communication issues, as well as on coordination between their diasporas. The countries work to positively brand the alliance, to emphasize its shared democratic values, and to bring Egypt into its orbit, via cooperation on natural gas.

11.Attempts by the Israeli MFA to improve its status – The MFA, still without a full time minister, worked to confront efforts to undermine its status. It battled against budget cuts and closure of diplomatic missions, aimed at increasing its impact on decision making, criticized the Ministry of Strategic Affairs for its handling of the BDS issue, launched a policy dialogue with the US State Department, and acknowledged the need to share more information about its work with the public. Nevertheless, the MFA still plays only a marginal role in core issues of Israel’s foreign policy.

12.Efforts by the MFA to excel at digital diplomacy – The MFA increased its activity in the field of digital diplomacy, acknowledging the potential it holds and attempting to establish itself as one of the leading Foreign Ministries in it. The MFA launched new initiatives on social media, including in Arabic (i.e. a Facebook page aimed specifically at Iraqis), and hosted international meetings on digital diplomacy.

* This document is published in cooperation with Friedrich-Ebert-Stiftung.