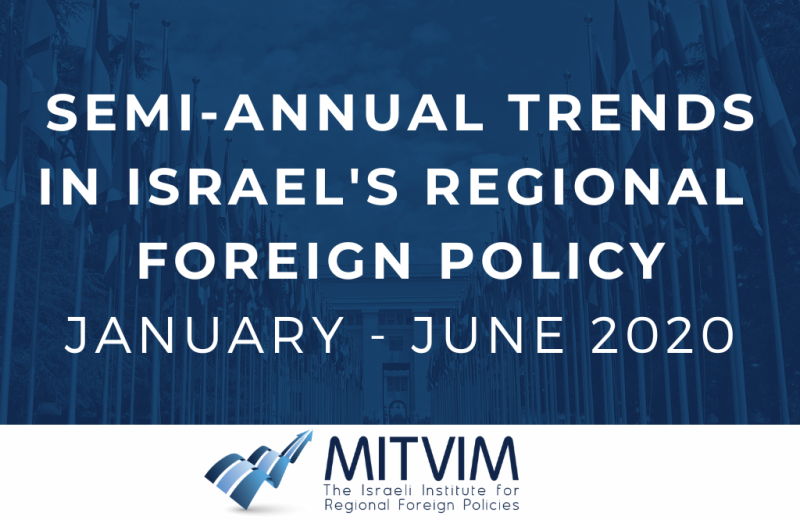 Two major developments affected Israeli foreign policy over the past six months: The Covid19 crisis that spawned new regional and international cooperation, and the declared annexation intentions that prompted international opposition and warnings of damage to Israel’s ties with Europe and the Middle East. At the same time, Israel’s new Foreign Minister demonstrated a desire to empower the Ministry of Foreign Affairs (MFA). These are the major semi-annual trends in Israel’s regional foreign policies, in January-June 2020:

1. Israel welcomes the Trump Plan but does not advance its implementation – The Trump Plan, unveiled in late January in the midst of Israel’s election campaign, was described by frontrunners Netanyahu and Gantz as a great opportunity. However, the plan drew support only in Israel and the US, whose standing in the world has significantly declined under President Trump. As it heads for the November presidential elections under the Covid19 crisis, US interest in the Israeli-Palestinian issue has waned. Israel did not take operative steps to implement the Trump Plan, except Netanyahu’s intention to take the opportunity it provides for annexation and map drawing by an Israeli-American team. The Palestinians vehemently opposed the plan.

2. Israel declares annexation intention, prompting widespread international opposition – The Trump Plan boosted Netanyahu’s pledge to annex territories in the West Bank, which dominated the public and political agenda. Gantz did not express opposition in principle, but conditioned annexation on regional and international approval and preservation of existing peace treaties. Annexation declarations drew harsh condemnation by the EU and key European states, Jordan, the Gulf States, US Democrats, the UN, Russia, and the Palestinians. Opponents argued that annexation violates international law, and warned that it would destabilize the region, damage Israel’s bilateral relations and distance prospects of peace.

3. Israelis and Palestinians cooperate on Covid-19, but clash over annexation – The Covid-19 outbreak spawned Israeli cooperation with the Palestinian Authority (PA) and even with counterparts in Gaza on staff training, medical equipment and supply transfers, knowledge sharing, and movement coordination to contain the disease. However, the PA ceased security and civilian coordination with Israel over Netanyahu’s annexation intentions. At the same time, Israel continued to ensure the transfer of Qatari aid to Gaza, to prevent an escalation of violence and a humanitarian disaster, while trying to advance a prisoner swap with Hamas.

4. The Crisis with Jordan deepens – The mistrust between the Israeli and Jordanian heads of state continued, with King Abdullah reportedly refusing to take Netanyahu’s calls but agreeing to meet with the Mossad chief. The Tzofar land reverted to Jordanian control, due to the expiration of the land lease agreement and after a failed attempt to keep it under Israeli cultivation. Jordan became a leading anti-annexation voice, warning Israel against negative repercussions for the peace treaty and working to mobilize international action, especially in Europe and the US, to prevent the move.

5. The UAE advances ties with Israel, warns against annexation – The UAE took positive measures toward Israel, cooperating with it on preparation for Expo 2020 in Dubai (now postponed to 2021), and on tackling Covid-19. The Emirates helped Israel obtain medical equipment and openly flew planeloads of equipment for the Palestinians to Israel’s BenGurion Airport. The UAE also displayed a supportive attitude toward its Jewish community, and senior Emirati officials legitimized ties with Israel even as they disagreed with its policy on the Palestinians. UAE officials directly appealed to the Israeli public, urging Israel to abandon the annexation idea and warning that it would be detrimental to relations and prevent normalization.

6. Diplomatic efforts and escalation against Iran and its proxies – Israel urged European states to outlaw Hezbollah, as Germany and Austria advanced, and to join US sanctions against Iran. Israel continued to strike Iranian targets in Syria and Hezbollah targets in Syria and Lebanon, and the confrontation escalated into mutual cyber-attacks and reports of Israeli sabotage of sites related to Iran’s nuclear program. Senior Israeli and US officials frequently discussed the Iran issue. Israel also pointed to potential threats from Lebanon, which suffers a deep economic crisis.

7. Indications of a more positive Israeli attitude toward Europe despite the shadow of annexation – Israel’s new Foreign Minister Gabi Ashkenazi opted for a more positive approach toward the EU, emphasizing the importance of the relations with it for Israel. He conducted talks with European foreign ministers and with the EU’s High Representative for Foreign Affairs Borrell. Ashkenazi also dismissed the phrasing of Hungary’s statement of support for Israel, which included a reference to “shared patriotic values” that are opposed to the European discourse. However, the annexation intention, which the EU clearly opposes, overshadowed attempts to turn a new page in Israel-Europe relations.

8. Israel’s alliance with Greece and Cyprus expands – Israel is reaping the fruit of its expanded cooperation with Greece and Cyprus, which extends beyond the energy field. The Covid-19 crisis, which created a global gas price slump, impaired the countries’ ability to profit from their natural gas reserves in the Mediterranean. However, the civilian infrastructure of the relationship built by Israel, Cyprus and Greece facilitated cooperation among them on new medical, technological, security and tourism challenges. Israel was the first destination of visits by the Greek Prime Minister and Cypriot Foreign Minister at the end of the first Covid-19 wave.

9. Israel maneuvers between cooperation and disputes in the Mediterranean – Natural gas reserves in the Mediterranean exacerbated the conflict between Turkey and Greece/Cyprus over maritime boundaries and drilling rights. In addition, the Libyan civil war embroiled foreign actors and further intensified tensions in the Mediterranean. Israel tried to stay out of these conflicts and to avoid a clear anti-Turkish stand, working instead to preserve channels of communication with the various actors. The Eastern Mediterranean Gas Forum continued its bid to become an international organization, but lost its centrality after the regional focus shifted from energy-economic cooperation to geo-political tensions.

10. International and regional cooperation against Covid-19 – Israel worked with international institutions and other countries to curb the Covid-19 pandemic and its repercussions. It mobilized the help of international partners in repatriating its citizens from abroad and obtaining medical equipment and supplies, shared information and tried to work with other countries on a controlled re-opening of its economy and tourism – before it suffered from significant resurgence of the disease. The Israeli MFA played an important role in all these efforts, displaying its significant added value in dealing with such crises.

11. Foreign Minister Ashkenazi tries to rehabilitate the MFA – Ashkenazi’s entry into the position of Foreign Minister lifted spirits in the MFA. He managed to mobilize budget for operations, recognized the importance of diplomacy as a key component of national security, expressed public appreciation for the Foreign Service’s professionalism, and advanced new diplomatic appointments, chief among them of Alon Ushpiz as the MFA’s Director General. Ashkenazi also displayed willingness to benefit from the experience of retired diplomats. However, many foreign policy issues remain under the responsibility of other ministries, and the Foreign Service is still not efficiently coordinated and arrayed.

*Dr. Roee Kibrik is Director of Research at the Mitvim Institute. Dr. Nimrod Goren is Head of the Mitvim Institute. This document outlines major semi-annual trends in Israel’s regional foreign policies, based on Mitvim’s monthly reports on the Israeli-Palestinian peace process/conflict, Israel’s relations with the Middle East, Europe and the Mediterranean, and Israel’s Foreign Service. The document is published in cooperation with the Friedrich-Ebert-Stiftung.