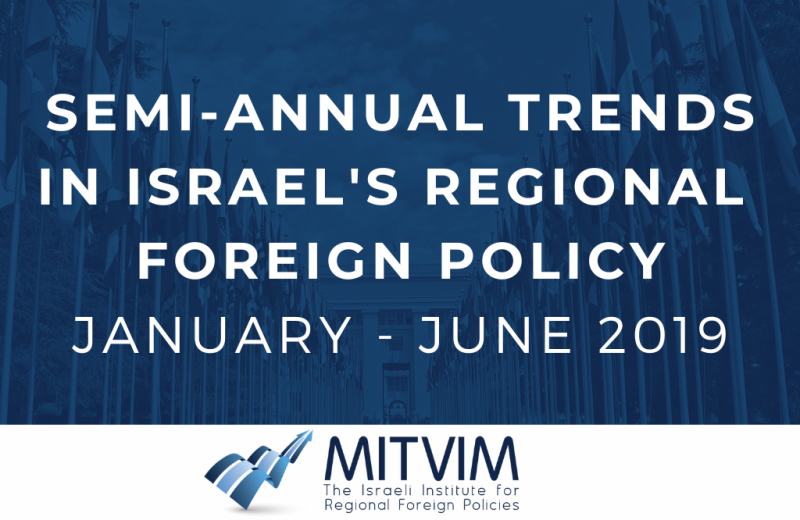 This document outlines major trends in Israel’s regional foreign policies over the past six months. It is based on the Mitvim Institute’s monthly reports that cover ongoing developments in the Israeli-Palestinian peace process/conflict, Israel’s relations with the Middle East, Europe and the Mediterranean, and the conduct of Israel’s Foreign Service.

1. Party leaders utilize foreign policy as an election campaign tool, but avoid in-depth discussion of the issues. Prime Minister Benjamin Netanyahu used the foreign policy arena to boost his 2019 election campaigns, instigating meetings with foreign leaders in a bid to underscore his international standing and diplomatic influence. Opposition parties, for the most part, avoided challenging him, given Netanyahu’s image as an effective player in this arena, and did not present a viable alternative on foreign policy issues. They, too, tried to utilize the diplomatic arena to upgrade their standing. Labor’s Avi Gabbay visited the UAE, Blue and White’s Benny Gantz addressed AIPAC and the Munich Security Conference, Blue and White’s Yair Lapid met with Emmanuel Macron and Meretz Chair Tamar Zandberg with Mahmoud Abbas. However, the issues themselves, including the peace process with the Palestinians, were relegated to the sidelines of public discourse.

2. Netanyahu openly announces policy goals he concealed in the past. Netanyahu has traditionally avoided explicit declarations regarding his goals on sensitive foreign policy issues. However, a shift is underway. In 2018, he declared that Israel was seeking to deepen divisions among member states of the EU to prevent consensus against Israeli policies, and stepped back from the Israeli policy of ambiguity regarding attacks on Iranian targets in Syria. In the first half of 2019, he continued with pronouncements on these issues, adding clear statements about Israeli efforts to maintain the Palestinian split between the West Bank and the Gaza Strip in order to avoid the need for progress in peace negotiations, and saying Israel was seeking to advance de facto annexation of settlements. Netanyahu takes advantage of strong backing by the Trump administration to openly promote policies deviating from international norms, without paying an international price and without incurring significant opposition.

3. Israel avoids war in Gaza, props up Hamas regime and undermines the Palestinian Authority. Despite several rounds of escalation that nearly resulted in a broad military offensive in the Gaza Strip, Israel opted to avoid war. It negotiated with Hamas, agreed to mediation by Qatar, Egypt and the UN, and approved the transfer of large sums of Qatari money to Gaza. In doing so, the Israeli government sought to preserve Hamas rule and fuel the internal Palestinian split in order to undermine the feasibility of a two-state solution. At the same time, Israel weakened the  Palestinian Authority by withholding tax money it collects for the Palestinians, and then tried to limit the damage in order to avoid the Authority’s collapse and ensure its continued security coordination with the Israelis. Israel’s security apparatus and finance ministry are the ones leading relations with the Palestinians.

4. Israel cooperates with the Trump plan but keeps a low profile. The Trump plan regarding the Israeli-Palestinian conflict did not play a central role in the run-up to the April 2019 elections. Repeated delays in unveiling the plan enabled the Israeli government to put a positive face on its response without having to clash with the US administration over specific details, which it might find less palatable. Israel’s anxiety over the plan ebbed the closer its coordination became with Trump’s envoys, and it welcomed the US decision top resent the economic part of the plan first, avoiding the need to express any opinion on political aspects. Nonetheless, the economic plan did envision a link between the Gaza Strip and the West Bank, which runs counter to Israel’s policy of driving a wedge between the two Palestinian territories.

5. Ties with Egypt grow warmer, while ties with Jordan cool down. As Israel and Egypt marked the 40th anniversary of their peace treaty, economic and defense ties were growing stronger – as publicly manifested in a declaration by President a-Sisi on security cooperation with Israel and an invitation to Energy Minister Steinitz to the Cairo launch of the Eastern Mediterranean Gas Forum (EMGF). Other ties are still very limited despite Israeli efforts to connect with the Egyptian public through social media and increasing Israeli tourism to Sinai. Relations with Jordan, on the other hand, have deteriorated with heightened tensions over Israeli policy on Jerusalem and large opposition in Jordan to normalization. There are no indications of an Israeli effort to reverse this trend, nor of attempts to leverage the 25th anniversary of the Israeli-Jordanian peace accord to improve relations.

6. Israel promotes alignments and cooperation in the Eastern Mediterranean. Israel played a generally positive role in the Eastern Mediterranean, supported Egyptian and Cypriot efforts to forge new regional alignments, kept boosting its trilateral alliance with Greece and Cyprus, and preserved ties with Turkey while making new appointments at its diplomatic missions there. Israel cooperated with American efforts to mediate between it and Lebanon, in a bid to launch maritime border negotiations. During the first half of 2019, Israel avoided intervention in tensions between Cyprus and Turkey over gas drilling and on issues related to Israeli tourism to the northern (Turkish) part of Cyprus. Under US pressure, Israel scaled back some of its ties with China, which is seeking deeper involvement in the Mediterranean.

7. Netanyahu develops ties with populist and far-right leaders amid growing Israeli understanding of the cost. The rise in power of far-right actors around the world raises questions regarding Israel’s policy towards ties with them and its willingness to compromise on historic memory and anti-Semitism. Israel has yet to formulate a coherent policy on the issue, although it continues to boycott the far-right parties in Austria and Germany. However, due to an ideological affinity with the global non-liberal axis and a desire to generate pro- Israel policies, Netanyahu bolstered ties with controversial leaders, such as Brazil’s Bolsonaro, Hungary’s Orban, Italy’s Salvini and Russia’s Putin. The crisis with Poland over Holocaust commemoration pointed to the limitations of this policy, as did opposition on the part of Jewish Diaspora communities and President Reuven Rivlin to Israel’s contacts with leaders tainted by anti-Semitism.

8. Deepening crisis with US Jewry and the Democratic Party. Suspicions of corruption against Netanyahu and the seal of approval he gave far-right parties in Israel; political campaigns with racist and fascist overtones; campaigns against civil society and BDS activists; profiling at border checkpoints; reported arms sales in Africa, Asia and eastern Europe; and attempts to curb the Supreme Court’s authority and ensure immunity from prosecution for Netanyahu – generated international contempt and further eroded Israel’s image as a liberal democracy. Along with Israeli moves to undermine the two-state solution, these developments deepened the crisis with US Jewry (incurring unusual AIPAC criticism) and led to unprecedented and harsh personal criticism by presidential candidates from the Democratic Party against Israel’s Prime Minister.

9. Israel digs itself into diplomatic holes and then seeks a way out. After encouraging a tough US stance on Iran, Israel seemed anxious about a possible US military operation and toned down its rhetoric. After encouraging American criticism of the Palestinian Authority to such an extent that Congress adopted a bill harmful to the Palestinian economy, Israel asked the US to ease its pressure to prevent the Authority’s collapse. After making allowances for the Polish Holocaust law, Israel understood that it had gone too far and adopted damage control measures, with criticism of the Poles resulting in Poland’s cancellation of a planned Visegrad Group summit in Jerusalem. After making the transfer of foreign embassies to Jerusalem a central policy goal, following the US Embassy’s relocation, Israel scaled back its rhetoric on the issue given its limited success.

10. Ongoing efforts to boost the foreign ministry’s standing and authority. The status and budget of Israel’s Ministry of Foreign Affairs continued to decline, and ahead of the April 2019 elections, opposition parties and civil society began calling for change. Netanyahu appointed Israel Katz as acting Foreign Minister after holding the portfolio himself for some four years, and then made the appointment permanent. The ministry cooperated with other government agencies to fight looming budget cuts and tried to boost public awareness of the importance of diplomacy and of the need to upgrade its status. Former diplomats stepped up their public activity, speaking out against the ministry’s eroding standing and Netanyahu’s intention (which fell through) to name a controversial political associate, Ayoub Kara, as Israel’s ambassador to Egypt.