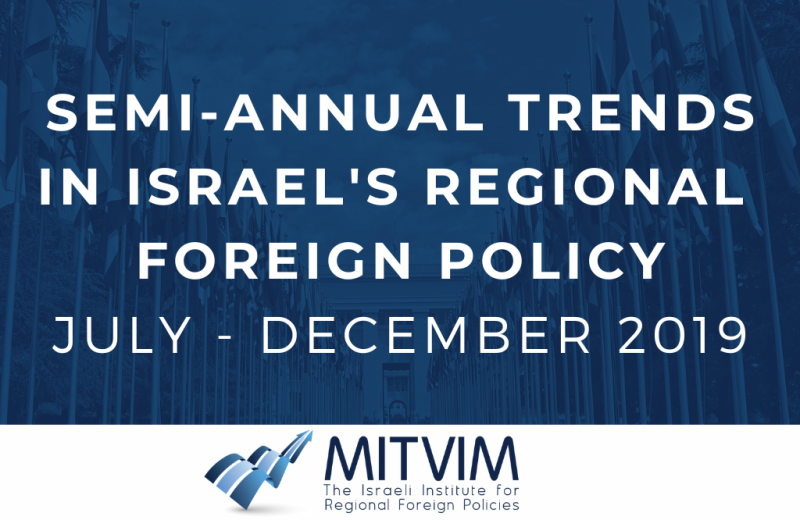 This document outlines major trends in Israel’s regional foreign policies over the past six months. It is based on the Mitvim Institute’s monthly reports that cover ongoing developments in the Israeli-Palestinian peace process/conflict, Israel’s relations with the Middle East, Europe and the Mediterranean, and the conduct of Israel’s Foreign Service.

1. From creeping annexation in the West Bank to intentions for official annexation – Driven by political campaigning, Netanyahu declared his intention to formally annex the Jordan Valley. He subsequently expanded his intentions to annexation of all West Bank settlements, generating declarations of domestic public support for the move. While the US administration avoided challenging Netanyahu on the issue, many international players,among them Democratic US presidential candidates, expressed opposition. At the same time, Israel’s government continued to advance creeping annexation in the West Bank, as manifested in ongoing construction, diversion of resources and regulatory changes.

2. Efforts to achieve a long-term truce with Hamas, while preserving the weakness of the Palestinian Authority (PA) just short of collapse – Israel and Hamas conducted indirect contacts via Qatar, Egypt and the UN special envoy in a bid to achieve a long-term truce, which will also enable the reconstruction and development of the Gaza Strip. Despite occasional flare-ups of violence, Israel opted to forego another round of war with Gaza and instead sought to reach understandings with Hamas and implement them. At the same time, Israel gave the PA funds it had deducted from its budget in order to avert its collapse but did not support it politically and continued to encourage the intra-Palestinian divide.

3. Opposition to international criticism of the occupation and settlements, while relying on a weaker US administration – Israel continued its campaign against the BDS movement in the legal sphere and on social media, and by banning entry into the country. It faced growing criticism of the occupation and settlements, including a legal decision in Europe on labeling settlement products and a decision in the International Criminal Court on a possible inquiry regarding war crimes. Israel’s countered these via personal attacks on the critics, attempts to undermine their authority and discredit their claims, and reliance on the Trump administration’s support despite a decline in international US influence.

4. Crises in ties with Jordan and a disconnect between the leaders, without a significant Israeli response – A severe crisis of trust emerged between Jordan and Israel, including a disconnect between their leaders. King Abdallah stated that relations with Israel are at their lowest ebb ever. The border enclaves of Naharayim and Tzofar were restored to full Jordanian sovereignty, and protests erupted in Jordan against Israeli gas exports and the peace treaty between the two sides. The administrative detention in Israel of two Jordanian citizens raised tensions, whereas Netanyahu’s stated desire to annex the Jordan Valley was perceived as a negative game-changer.  President Rivlin stepped in to try restoring trust and expanding the dialogue channels between the two states.

5. Attempts to raise the level of ties with Gulf States and increase their visibility – Israel sought to publicize the development of its ties with Gulf States, including the presence of senior Israeli officials at international events in the Gulf, positive social media interaction, participation in sports competitions, and visits of unofficial delegations. Israel stepped up its preparations towards its participation in Expo 2020 in Dubai. Foreign Minister Katz declared his intention to advance non-belligerent agreements with Gulf States, which in return underscored the need for progress between Israel and the Palestinians as a condition for normalizing relations. These developments occurred against the backdrop of Iran’s growing aggression toward Gulf States, which was not met with a significant American response.

6. Efforts against Iranian entrenchment along Israel’s borders, and against the nuclear agreement with Iran – Israel urged Western European states to adopt a tough line on Iran and support renewed economic sanctions, but without significant effect. It took part in an attempt to establish an international maritime security force in the Gulf and achieved certain success in encouraging other countries to classify Hezbollah and Iran’s Revolutionary Guards as terrorist organizations. On the military level, Israel kept up its raids on Iranian targets in Syria, expanding them to Lebanon and Iraq. In view of growing Russian criticism, Israel acted to preserve its defense coordination mechanism with Russia.

7. Israel and Europe alternate between cooperation and disagreement, while Israel dials down its Visegrad Group links – The EU continued to be Israel’s biggest trading partner and additional areas of cooperation were advanced. The new EU leadership expressed commitment to the two-state solution and to upgrading Israel-EU ties once peace with the Palestinians is achieved. Israel’s government took a negative and confrontational stance toward the EU, an attitude which filtered down and affected Israeli public opinion’s perception of the organization as a foe rather than a friend. Israel’s warm ties with the Visegrad Group, which Netanyahu championed earlier this year, disappeared from the public discourse, while tensions with Poland increased over Holocaust remembrance issues.

8. Strengthening of alliances in the Eastern Mediterranean while trying to keep an open channel to Turkey – Israel continued to deepen its cooperation with Cyprus, Greece and Egypt in the Eastern Mediterranean, with a focus on energy and participation in the regional gas forum (EMGF) established in Cairo in early 2019. Turkey’s growing isolation in the region began affecting Israeli policy. Although it had avoided doing so in the past, Israel expressed growing support for Greece and Cyprus in their maritime disputes with Turkey. At the same time, it worked to maintain an open channel to Turkey, despite tensions over the Palestinian issue, and especially over Jerusalem, Gaza and Hamas activity in Turkey.

9. Netanyahu mobilized foreign policy issues for his election campaign, but his image in the world suffered – As he did ahead of the April 2019 elections, ahead of the September elections Netanyahu also sought to portray his foreign policy achievements. He scheduled (and sometimes cancelled) international visits and meetings to improve his electoral prospects and aid his attempts to form a government. He highlighted issues such as the Jordan Valley annexation, Israel’s struggle against Iran and Gaza, efforts to relocate embassies to Jerusalem and the idea of a defense treaty with the US. The peace process was absent from the election campaigns. However, foreign leaders, among them Trump and Putin, were less responsive to Netanyahu’s political needs than they had been in the past.

10. Despite the appointment of a full-time foreign minister, Israel’s Ministry of Foreign Affairs (MFA) continued to face a severe crisis – After four years, Netanyahu appointed a full-time foreign minister, but this did not resolve the crisis suffered by the MFA. The ministry’s deep budgetary shortfall and labor disputes with the Finance Ministry continued. Israel’s unusual political predicament took its toll and further undermined the MFA’s ability to carry out its tasks. Israel failed to appoint new ambassadors to France, Russia, Canada and the UN, and left its embassy in Cairo without a permanent ambassador (although an appointed was already approved by the MFA). At the same time, Israel’s defense agencies continued to play a dominant role in foreign policy issues, on the expense of diplomats.

*This document is published in cooperation with the Friedrich-Ebert-Stiftung and with the assistance of former diplomats Arthur Koll, Nadav Tamir and Michael Harari.