A different take on the NSO Group affair- opinion 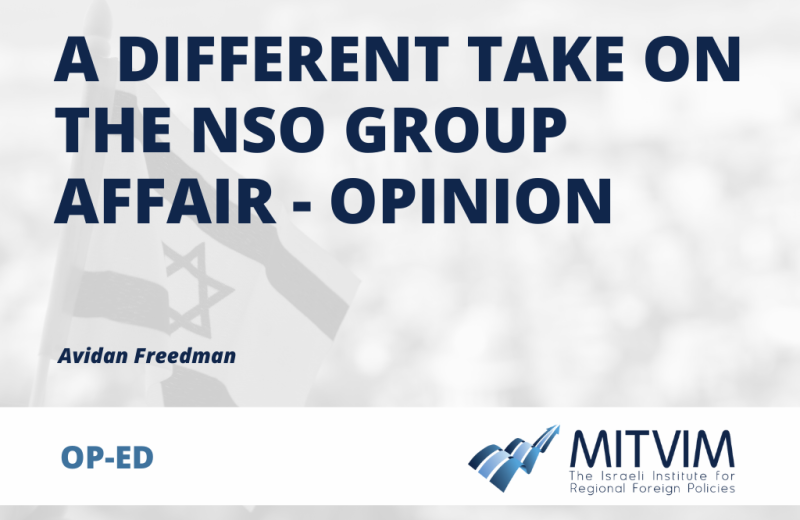 The recent report that Israeli police have been using NSO Group’s Pegasus software program against Israeli citizens, including allegations that it has been used against completely law-abiding citizens exercising their democratic right of protest, has shocked and horrified the Israeli public. In truth, for anyone who has been following the many reports in recent years, and with increasing frequency in recent months, detailing the use of Israeli spyware by undemocratic regimes known for their wanton abuse of human rights, these revelations come as no surprise. If licenses could be issued to allow Pegasus to be used in gross violations of human rights, it could be no more than a matter of time before it was used in Israel as well.

Hopefully, with the public outcry of all those who were able to conveniently ignore this crisis until it started to threaten them directly, the government will be forced to understand that a serious response is called for. If handled correctly, that response can present a rare opportunity for the Foreign Affairs Ministry to prove its strategic value and to chart a new course by introducing ethical dimensions into Israeli foreign policy. In so doing, it would also bolster Israel’s standing in the world and instigate a move of public and political usefulness.

To realize the extent of the opportunity at hand requires an understanding of the problem that has prompted harsh criticism of Israel over the use of technologies once considered the pride of the nation. The crux of the problem is not in the way companies such as the NSO Group, Candiru and others operate. Perhaps, one might have hoped that these firms would display greater responsibility in their commercial dealings with tyrants and human rights violators, but it is hard to blame them when the Defense Ministry and government license and even encourage their actions. The real problem lies in an oversight policy that fails to take proper consideration of the ethical aspects of Israeli defense exports and the egregious human rights violations they enable.

Rather than regulating curbs on exports to regimes known for their poor human rights records, as every Western state has done, the human rights aspect is just one amongst a host of considerations weighed by the Israeli Defense Export Controls Agency (DECA) in its licensing process. In most cases, these consideration appear to be marginalized in favor of a narrow foreign policy, where economic and security interests reflect a limited perception of foreign policy grounded in realpolitik that views as legitimate tools all means fair and foul to promote Israel’s immediate, short-term commercial and diplomatic interests. This perception was not born during the past decade, but one can safely say that it has characterized the foreign policy approach of former prime minister Benjamin Netanyahu.

From his first day on the job, Foreign Minister Yair Lapid sought to make a clean break with such past policy. In the June 14, 2021 ceremony marking his entry into office, he suggested telling Israel’s story differently in order to re-position it in the world as a liberal democracy in tune with global trends. At the July 2021 Global Forum for Combating Antisemitism, he explained what he meant. “It’s time to tell the right story about antisemites. It’s time that we tell the world what we face. Antisemites weren’t only in the ghetto in Budapest. The antisemites were the slave traders who threw chained slaves into the ocean. The antisemites were the Hutu tribe members in Rwanda that slaughtered the Tutsis,” he said.

If Israel insists on defining antisemitism as a unique and special phenomenon directed solely at the Jewish nation, Lapid argued, we cannot expect the world to identify with us. On the other hand, if we explain that antisemitism is a distinct form of racism, opposition to democracy and violation of human rights, we will succeed in mobilizing solidarity and understanding of the problem that threatens all of us.

UNLIKE NETANYAHU, but similarly to the views of the current Democratic administration in Washington, this approach seeks to place the values of a modern and liberal world at the core of foreign policy. This is how the foreign minister phrased it in a document outlining the key points of the Foreign Ministry’s plans for the 36th government. “Contrary to popular perception, relations between states are not based on interests alone, but also on values. A wise foreign policy balances the ideal with the real, distinct interests with world views… the Foreign Ministry’s role is to present the State of Israel as it truly is – a liberal, vibrant democracy.”

This approach highlights the major opportunity provided by the cyber spyware scandals for the Foreign Ministry to prove the sincerity of its intentions and implement a deep change in Israeli foreign policy. When the US Commerce Department ruled that Israeli firms were supplying technologies to dictatorial regimes that use them to threaten journalists, human rights activists and dissidents, it imposed heavy sanctions on them saying they were part of the Biden-Harris administration’s efforts to put human rights at the center of US foreign policy. If Lapid wants to prove his commitment to such values, he could use the veto power that the law gives the Foreign Ministry to block exports to questionable regimes.

This policy shift would also reflect the global shift in approach to exports of weapons systems. The addition of two Israeli firms to the US blacklist proved that we cannot keep priding ourselves on being a liberal, vibrant democracy and at the same time help other regimes trample democratic values. Mobilizing the world to combat antisemitism in its universal form, as Lapid suggests, becomes a far more formidable task when Israelis sell weapons to the Hutu in Rwanda who slaughtered the Tutsi or to offer tyrannical regimes offensive cyber tools for surveillance of journalists and human rights activists.

Changing the Foreign Ministry’s engagement with this issue would allow Lapid to bolster the ministry’s standing as a significant, prominent player in government decision making. It will bolster Lapid’s efforts to re-position the ministry as an actor shaping strategic policy after years of erosion in its standing. The Foreign Ministry’s veto power over defense exports was one of the innovations introduced into the Defense Exports Law of 2007 under US pressure. Whereas, in the past the ministry mostly served as a rubber stamp to uphold Defense Ministry interests, an opportunity and a need have now presented themselves to affect the considerations of the DECA.

As well, this crisis offers an opportunity to enhance Israel’s standing vis-à-vis world Jewry. A foreign policy shift that places values front and center is essential to stemming the growing alienation between many diaspora Jews, especially the younger ones, and Israel. When Israel sold Myanmar weapons, over 300 American rabbis signed a letter demanding that Israel halt all military aid to the regime, which was carrying out ethnic cleansing. Headlines around the world highlighting the use of cutting-edge Israeli technologies to persecute human rights activists and stifle free speech were a harsher blow to many Jews wishing to feel pride and identification with Israel than thousands of BDS campaigns have been.

Many advantages lie in significant Foreign Ministry involvement in this crisis, but addressing the root of the problem requires political backing for legislation curbing arms exports to regimes abusing human rights, similar to laws adopted in the US, the European Union and the entire western world. Such a move also presents an opportunity for courageous political leadership, and that enjoys broad support both within the government coalition and the public at large. The coalition would regard such legislation as a unique measure promoting a human rights agenda, and at the same time winning support from figures in the Nationalist Religious and right-wing arena, such as Rabbi Haim Drukman and Rabbi Shlomo Aviner. Such a goal also enjoys broad public support, as reflected in the annual foreign policy index of the Mitvim Institute, which found that 64% of respondents believe Israel should ban sales of technology products used to violate human rights – the most distinct finding in Israeli public opinion on foreign policy.

To sum up, serious Foreign Affairs Ministry intervention and clear legislation putting a stop to Israeli weapons transfers into the wrong hands could turn a series of crises into a host of opportunities, bolster the Foreign Affairs Ministry and Israel’s standing on the world stage and vis-à-vis world Jewry, and above all, prove that this commitment to values underpins our foreign policy and our identity as a state.