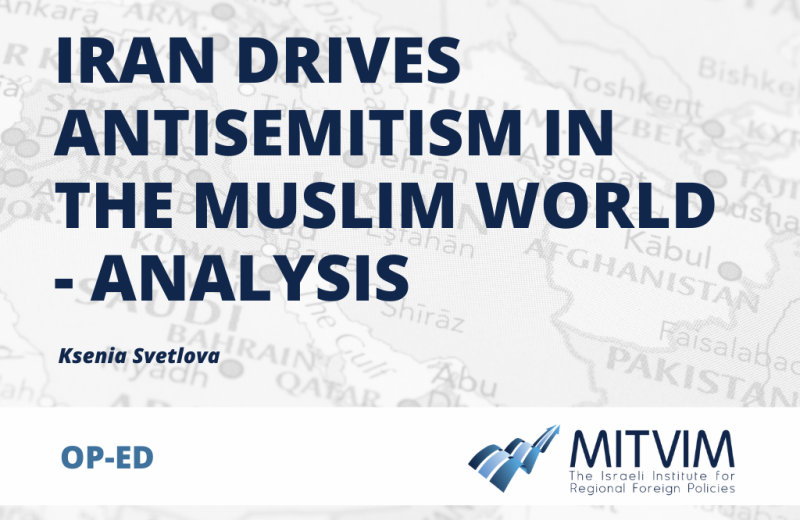 When Iranian General Alireza Tangsiri, the commander of Islamic Revolutionary Guard Corps Navy, said that Saudi Arabia’s royal family actually descends from Jews who used to fight with the Prophet Muhammad in ancient Arabia, he obviously thought this was the best possible way to insult and humiliate the house of Saud.

Tangsiri is certainly not the first one in the Middle East to “expose” the Jewish roots of the rival party and to accuse a leader or a dominant figure of being a descendant of the Jews. The internet is full of conspiracy theories about the Jewish mother of the late Libyan leader Moammar Gadhafi, the Jewish roots of ex-Iranian president Mahmoud Ahmadinejad and the Jewish origins of Abu Bakr al-Baghdadi, the former leader of the terrorist ISIS organization.

Yet, there is a big difference between an obnoxious internet-born rumor and official state policy that proudly trumpets its antisemitism. While some countries in the Middle East are making an effort to promote tolerance and coexistence and to fight against antisemitism in the education system and in the media, it seems that Iran – along with radical Islamist movements – is pulling the Muslim world in the opposite direction, says Iranian-born Ellie Cohanim, who served as Deputy Special Envoy to Combat Antisemitism in the Trump administration.

“The Iranian regime engages in what I have termed an ‘obsessive antisemitism,’ meaning that antisemitism motivates much of their activity and is part and parcel of their ideology,” Cohanim told The Media Line. “Whether it is the fact that they have named their militia group the ‘Al Quds Force,’ so named for their desire to ‘liberate’ Jerusalem from the Jews; or their Holocaust denial as state policy; or their terror proxy activity through Hamas, Hizbullah, Palestinian Islamic Jihad and even the Houthis, all aimed at the destruction of Israel, the regime’s desire to end a Jewish sovereign presence in the Middle East animates much of their activity,” she said.

The Islamic Republic of Iran is home to a Jewish community of about 10,000. Shortly after the Islamic Revolution in 1979, a few Iranian Jews were accused of spying for Israel and executed; 35,000 Iranian Jews left Iran soon after. Officially, Iran separates between the Jews and the “Zionists,” however, in practice, these terms are often used interchangeably.

Cohanim highlights the use of both the terms Zionist and Jew in the Iranian general’s speech in which he claimed that the Saudis are descendants of Jews. “Noteworthy in this speech is how the navy general would flip back and forth between the terms Zionist and Jew, contradicting the regime’s own narrative in which they claim that they don’t hate Jews they merely hate Israel. But in moments like in this speech, or when Ayatollah [Ali] Khamenei had the gall to refer to US President Donald Trump’s son-in-law and senior advisor Jared Kushner as ‘Jewish’ and ‘filthy Zionist,’ in those moments they undermine their own narrative,” she said.

It’s not a secret that for many years antisemitism was well accepted in most parts of the Middle East, and often propelled by various regimes, both conservative and progressive. Antisemitic sermons were read at the mosques and antisemitic tropes were taught in classrooms at schools and universities. However, today, when more Middle East countries are developing warmer relations with the Jewish state, and the Abraham Accords signed between Israel, the United Arab Emirates and Bahrain, as well as a peace deal with Morocco are flourishing, it seems that the tide is finally turning, even though it might take many years to undo the indoctrination of the past. Yet, Iranian leadership – as well as Muslim Brotherhood offshoots around the world – keep promoting the same old hate-filled agenda against the Jews and the Jewish state, relying on several sources rooted in religion.

While Islam recognizes Judaism as a monotheistic religion and sees Jews as the “people of the book,” relations between the Prophet Muhammad and the Jews weren’t always easy. While the hadiths – a traditional collection of the sayings of Muhammad and of his tacit approval or criticism – contain information about the care and concern the prophet had for his Jewish neighbors, the Quran and the Hadith also mention that Muhammad had fought against the Jewish tribes that refused to embrace Islam. These verses are often recited and quoted by antisemitic religious and political leaders in the Muslim world; however, the verses are often misquoted and their meaning is distorted, according to Haras Rafiq, interim managing director of ISGAP – The Institute for Study of Global Antisemitism and Policy and a trustee of the British charity Muslims Against Antisemitism.

“When we look at traditional, classical Islam we see that Jew is not a derogatory term. This phenomenon is approximately 100 years old. Today, when you want to attack somebody in the Muslim world, you call him Jewish. It’s the worst kind of a slur among the Muslim majority around the world. When Imran Khan became a prime minister of Pakistan, there was a fundamentalist extremist organization that called him a Jew,” he told The Media Line.

After the fall of the Ottoman Empire, the vacuum was filled with various ideologies such as fascism, communism, Islamism, Baathist and more, Rafiq says. “Leaders, such as the Grand Mufti Hajj Amin al-Husseini merged the European form of antisemitism with misinterpreted verses from the Quran and turned it into a religious issue,” Rafiq said.

Rafiq, who has advised numerous British prime ministers and worked with UK ministers and US secretaries of state, notes the misuse of the Quranic quotes and stories, and blames the propagandists from Iran and radical Islamist organizations for using the Quran and the Hadith for incitement and recruitment purposes. “The Shia in Iran believe that we are now at the ‘End of Times’ and the Jews are doing the work of the Dajjal, the Antichrist, by controlling the money,” he explained.

Saudi citizens do not appear to have reacted to the Iranian’s general verbal attack against the royal family.According to Ahmed N. Al-Ibrahim, a Saudi-American political analyst, the Saudis are not bothering themselves with Iranian slurs and insults too much. “Sometimes Iran says that the Saudi royal family is Jewish. And sometimes they say that the Sauds are from Mars,” he said.

“They can say whatever they want. We know that the Iranian regime is backward – it is against the Arabs, against the Jews, against all. Their number one enemy is Al-Saud. We are not worried. Also, the bloodline of the Sauds is well-known. These are stereotypes for local consumption. As for antisemitism, well, Jews are not the only Semites in the Middle East. We are Semites too. I’m a Semite. How can I be antisemitic? It means that I will be against myself,” Al-Ibrahim added.

Experts are looking at what can be done today to curb the hateful antisemitic propaganda coming from Iran.Cohanim believes that, in order to stop the inciteful rhetoric, the US has to choke off the Iranian regime’s funding sources.

“The reality is that the regime’s record since taking power in 1979 has been to use the country’s resources to line their own pockets, fund their terror proxies, develop nuclear weapons capability, and fund a massive multilingual propaganda machine to the tune of $1 billion this year alone according to reports,” she said.

Rafiq says that education and relying on trustworthy knowledge about Islam are key, especially in the West.“I said in the past that soon there will be more radical mosques here in London than in Saudi Arabia. It is very dangerous. Today we see a positive turn in some Middle Eastern countries, but still – it might take decades to achieve a real change,” he concluded.

Iran
Prev
All Publications
Next