Israelis Still Believe in IDF but Criticism Is Growing 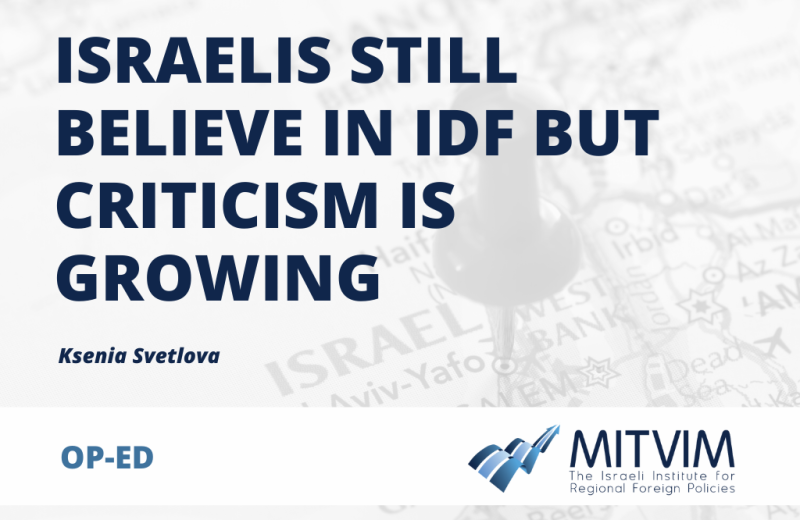 The Israeli public’s trust in the IDF is in decline, according to the 2021 Israeli Democracy Index. In October 2021, according to the survey, the level of trust (in the Jewish sector) reached a record low of 78%, compared to 90% in June 2021.

The data compiled by the Israel Democracy Institute’s Index also show a continuation of erosion of trust in other state institutions such as the presidency, the Knesset, the government and the judiciary. Yet, for many Israelis, the change in how citizens see the IDF – the people’s army that for years was seen as the ultimate melting pot where all social strata and all ethnic and religious groups mixed – is a worrying sign that reflects a significant change in public attitude toward the army and its role in society.

While the army keeps promoting its image of the defender of the nation, a unifying force, a powerful force for upward mobility, more and more people criticize the IDF for its constantly swelling budget, the poor living conditions of soldiers performing mandatory service, and its inability to provide a sense of security. Along with authentic grievances and complaints, there are also power struggles in the cabinet, political interests and plenty of egos to go around.

One of the most heated issues in public debate today is the question of the military’s budget, and most importantly, the generous pensions of retired IDF officers.

Col. (res.) Ronen Itsik, who researches relations between the military and society and who served as a brigade commander in the Armored Corps, believes the problem is the lack of distinction drawn between those who serve with combat units and those who do not.

“The army should show sensitivity and respond to criticism and the public outcry. This hasn’t happened. There is no argument regarding those IDF officers who serve on the frontline, in the South or in the North. Their spouses most often can’t develop their own careers, since they [the officers] are rarely at home, and the public knows this. However, there is a question mark regarding those who serve at home-front bases. They don’t risk their lives, they go to work every day just like everybody else – a nurse at the hospital or a civil engineer,” says Itsik.

At the same time, Dr. Efraim Sneh, a retired brigadier general and a former deputy defense minister, believes the media is doing an injustice to the men and women who serve the country.

“The IDF’s ratings have dropped for many reasons, and one of them is the negative image that is presented by the media, which is portraying the officers as greedy. This media attack [concerning the pensions] is unjustified and its source is not the public but rather the Finance Ministry. It’s more about power struggles [among the political leadership], and the people are not aware of this fact,” Sneh says.

Itsik mentions another important factor that contributes to the drop in public trust – the changing status of reserve soldiers, miluimnikim.

“During the last 10 years many reserve units were closed, and we know from studies that when Mom or Dad do their reserve service, it affects the whole family. It becomes something very central and unifying and contributes to an increase in patriotism,” he says.

“We also saw a drop in IDF ratings after the Second Lebanon War [of 2006], when the IDF experienced severe problems in this respect; the reservists were mistreated, there was a lack of funds and supplies. I know that this issue is being taken care of right now and we will probably see positive results in the next few years,” says Itsik.

Maj. Gen. (res.) Amos Gilad is the executive director of the Institute for Policy and Strategy (IPS) and chair of the Annual Herzliya Conference Series at Reichman University. He mentions yet another IDF-related controversy that recently stirred public debate – the tension between service in combat roles and technological ones.

“The IDF chief of staff said recently that the most important and valuable service is in the combat units, rather than in technological ones such as Unit 8200. So, if he really means it, he should raise the salary of these [combat] soldiers by five or even eight times. But the words have not been followed by deeds for now,” says Gilad.

In recent years the competition among young Israelis to get accepted to Unit 8200 − responsible for collecting signal intelligence and code decryption − and similar tech units has become fierce, since after service they can easily find lucrative employment in top Israeli high-tech companies.

“We need to fight this phenomenon where the sons of the rich do their service in the tech units, which only enlarges social gaps,” Sneh says. “This purpose can only be served through improvement of education in the periphery, since you can’t build a First World army with a Third World education.”

‘Glass half empty, glass half full’

While the reasons behind the drop in public trust in the IDF are many, some researchers and retired IDF officers debate the significance of the survey. Does it reflect a long-term trend or merely the current mood?

Itsik says that despite the data provided by the Israel Democracy Institute, there is no real decline in attitudes toward the IDF.

“When I look at the long-term study conducted at the University of Haifa since 2000 by Professor Gabriel Ben-Dor, I see that the level of trust in the IDF from 2000 until today remains high,” Itsik says. “There are peaks and low points, but all in all the trend remains the same. The findings of the Israel Democracy Institute also show this.

“I agree that there is volatility and that currently, we are not in a very good place. There are many factors that contribute to this – the problematic appointments during the last 10 years, the ambiguous results of the last military operation in Gaza [Operation Guardian of the Walls in May 2021], the problems of the reserve soldiers, the pensions issue, and yet I believe that we are looking at fluctuations within a trend, and of course, they have to be dealt with,” says Itsik.

Gilad says that in comparison to other state institutions, trust in the IDF still remains very high.

“The good news is that the Israeli public still thinks that there is no substitute for the IDF, and the vast majority believes that the IDF defends Israel sovereignty and independence,” he notes.

“After all, when you analyze Israel’s strategic situation, you realize that the security situation is actually very good – the borders are quiet, Iran doesn’t have a nuclear bomb, the IDF is striking Iranian targets in Syria and enjoys alliances with the Sunni Arab countries, Gaza is quiet. That’s why the trust level still stands at 78%,” Gilad says.

‘There are no grand victories anymore’

The relative security calm that Israel currently enjoys has proven to be a double-edged sword for the IDF. On the one hand, it gives it time to modernize and prepare for future scenarios.

In one of these scenarios, Israel will have to fight against Hizbullah in the North, Gaza in the South and pro-Iranian forces in Syria all at once.

On the other hand, when nothing happens on the security front, many Israelis ask whether such a huge chunk of their tax money should go to the military, while others expect better performance during combat, for example, an improvement over the events in Gaza during Operation Guardian of the Walls last May.

Itsik argues, “There was a large contradiction when the IDF presented the [aerial] liquidation of the so-called Hamas metro [miles of tunnels in Gaza] as a huge achievement, but very soon it became clear that very few terrorists were killed in this attack. Also, Israelis continued to be subject to [Hamas] missiles afterward, also in Jerusalem, so there was a problem with credibility. The public thought that the results of the operation were ambiguous.”

Sneh adds, “When there is no fighting, the public does not understand where all the money goes and starts asking questions.” He believes that the IDF should remain a “people’s army” where rich and poor, secular and religious, serve together.

Gilad says, “There aren’t any more ‘grand victories’ like we had in the past, and there won’t be any in the future. We must get used to this but remember that the IDF is the provider of Israel’s security and defense. Lessons should be learned, and mistakes corrected in order to increase the public trust in the army.”