After 20 years, time for a new Arab peace initiative 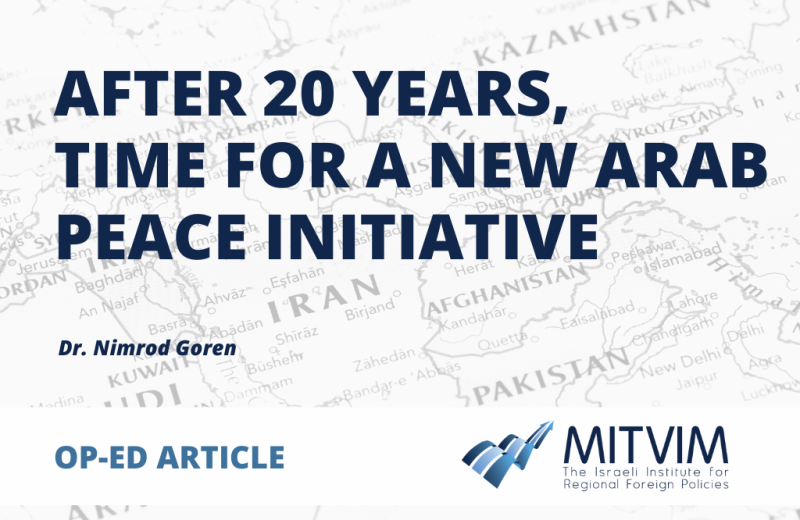 Twenty years ago, in the midst of the al-Aqsa Intifada, Arab leaders convened in Beirut for their annual summit and adopted the Arab Peace Initiative (API). The move followed the failure to reach a permanent Israeli-Palestinian peace agreement, a freeze in relations with Arab states that had forged ties with Israel during the 1990s peace process, and an Israeli conviction that there is not partner for peace on the other side of the conflict. It presented a ray of hope in a dreary landscape.

The API, conceived by Saudi Arabia, offered Israel regional belonging, normal ties with all Arab countries, and a sense of security in exchange for resolving conflicts with the Palestinians and Syria. It presented the Israeli leadership and public with an incentive to make peace, addressing Israel’s long-standing yearning to shake off its regional isolation and to be accepted in its neighborhood.

The API, however, did not bring the desired peace. A large majority of Israelis never heard of it. Most of those who did, were not aware of its actual content. And many of those who are aware, tended to focus on reasons to reject it or question its credibility. Consecutive Israeli governments never formally responded to the initiative. Despite occasional behind-the-scenes overtures, Israeli leaders generally chose to ignore the API. Some of them even spoke out against it, because of their opposition to the two state solution it entailed.

The Arab League ratified the API repeatedly over the years and emphasized its commitment to it, even during periods of Israeli-Palestinian escalation, instability in the Arab world, and the rise of political Islam in the Middle East and North Africa. However, Arab states did invest much in marketing it to Israelis and displayed only limited willingness to adapt its wording to changing circumstances.

The international community, for its part, welcomed the API and recognized its potential, but failed to incorporate it into a broader international package of peace incentives, which could have also included US security guarantees and an upgrade of ties with the EU.

And so, the API turned along the years into a missed opportunity, with mounting questions about its relevance. First, it was the Syrian civil war, which made the initiative’s clause calling for Israeli withdrawal from the Golan Heights unrealistic under the circumstances. Second, the 2020 normalization agreements between Israel and several Arab countries reflected an Israeli right-wing success of significantly de-linking the normalization of ties with Arab states from progress towards the two state solution.

The Negev Summit, held exactly on the 20th anniversary of the API, expresses the type of normal relations envisioned by the initiative. However, the Palestinians were not invited to the event and the Palestinian issue is not high on its agenda. This led Jordan to skip the festive meeting. The summit coincides with a particularly low period for the Palestinians, with delays in European aid to the Palestinian Authority, US calls for internal Palestinian reforms, widespread Palestinian distrust of its leadership, and the continuation of the ongoing split between the West Bank and the Gaza Strip although the government in Jerusalem no longer wishes to preserve it.

This is not a cause for Israeli celebration and should not be seen in Israel as a victory over the spirit of the API. Alongside international incentives and peacemaking efforts, Israeli-Palestinian peace is first and foremost in the interest of the two peoples engaged in the conflict. Thus, Israel should try to attract global interest in the peace process, even if the world appears uninterested. Israeli-Palestinian peace will serve Israel’s objectives, enhance its security, increase its ability to breach additional diplomatic glass ceilings, and assist to fulfill national and regional potential for economic prosperity.

Efforts to advance peace will benefit from an update to the API, as well as to other key proposals related to Israeli-Palestinian peacemaking, written some 20 years ago and often referred to until today, such as the Clinton parameters and the Quartet roadmap. Changed circumstances require new policy plans. Even if the goal of achieving a two state solution remains unchanged, the way to achieve it should be relevant to today’s changing and renewed Middle East.

A new peace plan formulated by the Arab League could be based on preliminary consultations with Israel, which were not possible 20 years ago but are certainly feasible in today’s new regional realities. A preliminary Israeli-Arab discourse on a new Arab Peace Initiative could result in an initiative that provides a better response to needs, sensitivities and political capabilities.

A new Arab Peace Initiative could more accurately spell out the glass ceiling in Israeli-Arab relations set by the continued Israeli-Palestinian conflict. It could present Israel with a roadmap for expanding the normalization cycle to other Arab and Muslim countries. And it could serve as an incentive for the Palestinians, increasing the likelihood that the future leadership there, in the post-Abbas period, will be pro-peace and moderate, and will not be shaped by extremists.

The Negev Summit, participated by Israeli and Arab foreign ministers, is historic and symbolizes a new, positive and very different regional reality from the one to which Israel had grown accustomed for decades. These changes should now also be leveraged to promote Israeli-Palestinian peace, with the active help of Israel’s new Arab partners. Even if many of them do not prioritize this issue at the moment, which is likely to change in the future – hopefully in constructive circumstances, rather than as a result of another Israeli-Palestinian escalation.

Distrust of the Arab world and a conviction that the API might be a trap, shaped Israeli attitudes towards the API along the years and was an obstacle to its realization. Today, with growing trust and a sense of partnership between Israel and key Arab countries, this obstacle can be removed. If framed correctly, a new Arab Peace Initiative, could be seen in a more positive light. It could be presented as a joint regional aspiration for Israeli-Palestinian peace, which will complete the transformation of Israel’s standing in the Middle East and which will open new horizons for regional cooperation, prosperity and security.

The op-ed was published in The Jerusalem Post on March 2022.