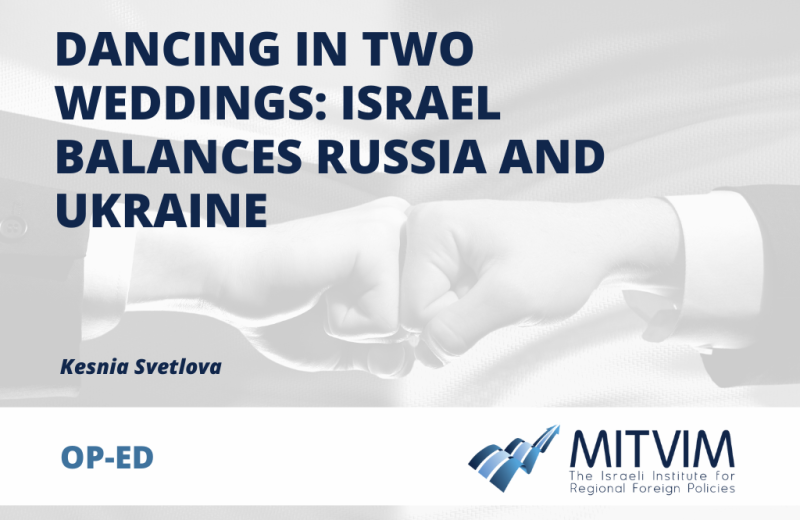 Every Saturday night for the last four weeks, thousands of Israelis have been gathering at Habima Square in Tel Aviv to offer their support to Ukraine. Waving signs and blue-and-yellow flags, they’ve been calling on their government to accept more Ukrainian refugees and take a tougher line on Moscow. Near the same spot just two years ago, huge posters put up by then Prime Minister Benjamin Netanyahu’s election campaign showed him cordially shaking hands with Russian President Vladimir Putin.

Today, most of Israeli society is disgusted by the brutality of the Russian invasion. Some Israeli men have travelled to Ukraine to fight, and Israel is actively involved in the aid effort for Ukrainians at all levels. Yet, Israeli Prime Minister Naftali Bennett has sought to play the role of mediator. He has refused to sell Kyiv anti-rocket systems or join anti-Russian sanctions, and his statements have been carefully crafted to support Ukraine without calling out Russia explicitly by name. When asked, every official in Bennett’s government has mentioned the need to balance between backing Ukraine, protecting Jewish communities in both warring countries, and, most importantly, preserving Israel’s freedom of maneuver in Syria, where it coordinates its every move with the Russian army.

In fact, Israel’s balancing act with Russia goes back to well before Russia intervened in Syria. But it will be hard to sustain in the coming months. Not only will Western pressure increase, but many of the Israeli government’s current justifications will fall apart. If Jerusalem cannot play the role of meditator or protect Jewish communities in Ukraine from Russia’s assault, it will have little to show for its current fence-sitting. Beyond this, Israel’s identity as a Western democratic country will make it harder for the government to follow the ambiguous approach of its Middle Eastern neighbors.

Between Crimea and Syria

In September 2015, Israel woke up to discover that it shared a border with Russia. After Moscow intervened in Syria, Russia quickly became the most dominant power in the country. Despite Israeli requests, Moscow deployed its most advanced S-400 air defense system, which theoretically enables it to close Syrian skies to Israeli military aviation. As a result, Israel was forced to coordinate its activities with Moscow through a “deconfliction center.” So far, despite occasional friction and rebukes, Israel has maintained the activities that it deems essential to prevent Iran from expanding its influence or establishing a presence on Israel’s borders.

The Syrian complication is often cited by various Israeli officials as one of most significant reasons for Jerusalem’s nuanced position on Russia. Yet, in March 2014, when Israel declined to join the United States in denouncing Russia’s invasion and annexation of Crimea, Russia was still 18 months away from sending forces to Syria. According to a Haaretz report from that time, Netanyahu resisted pressure from the Obama administration and refused to denounce Putin’s actions. Two years later, shortly after Donald Trump’s November 2016 election, Israel voted in favor of condemning the Russian occupation of Crimea as a reaction to the Kremlin’s support of a resolution that didn’t recognize the connection between the Jews, the Western Wall, and the Temple Mount in Jerusalem. In short, Israel was happy to use the situation in Crimea tactically in its own relations with Russia.

As a matter of fact, Israel’s balancing act was always at the center of its foreign policy when Russia was involved. During the 2000s there was fear that Moscow might supply Israel’s enemies with more lethal weapons. When Netanyahu’s relations with Washington soured during the Obama administration, his visits to Putin’s palace in Sochi became more frequent. In May 2018, he was one of only two Western leaders who marched alongside Putin in a Red Square military parade honoring Russia’s 1945 victory over Nazi Germany.

The View From the Middle East

Today Israel is hardly the only Middle Eastern country that maintains some form of neutrality on Russia. In fact, its position is closer to that of the Arab Gulf states or Egypt than to that of the United States or European countries. During the last few years, American partners in the Middle East have improved their relations with Moscow. Their weapon purchases swelled, and their dependency on Russian wheat grew. Concerned by Washington’s changing global priorities, specifically the pivot to China, Arab leaders welcomed Putin to their capitals and increased cooperation. In Egypt, Russia built and financed the al-Dabaa nuclear plant, while in Libya its mercenaries operated alongside Arab forces in support of Gen. Halifa Haftar.

It’s clear why non-democratic Arab governments would work with Putin. Many see Ukraine’s bid to break away from Moscow and consolidate a democratic government as akin to the threat that they faced during the Arab Spring. Although many might fear that Putin breaching the sovereignty of another state — reminiscent of Saddam Hussein — sets a dangerous example, they still prefer to wait and see how the war plays out.

But Israel, being a democratic country that sees itself a part of a collective West, faces a degree of scrutiny that is not applied to Egypt or Morocco. Even Turkey appears to be taking a firmer stance: Ankara didn’t join Western sanctions and is also trying to offer its services as a mediator, but it is not shy about selling advanced weapons to Kyiv or closing the Bosphorus and the Dardanelles straits to Russian warships.

One week after the first Russian bombs were dropped on Ukrainian cities, Bennett travelled to Moscow to meet with Putin. The meeting took place during Shabbat and lasted for 3.5 hours, emphasizing the just how committed Israel was to the risky task of mediation. Since then, there have been a few more Bennett-Putin talks, endless spins and leaks, and even some reports of progress on negotiations between the two sides. Now, according to Israeli officials, the country remains justified in pursuing “neutrality” between Russia and Ukraine. They argue that if Israel joined the Western sanctions and sold weapons to Ukraine, it would lose the special status in Russian eyes that could make it an effective mediator.

While Washington was quite hesitant about Israel’s new role, Kyiv, as well as many European capitals, welcomed it. This allowed Jerusalem to gain some support and legitimacy for its position. Caught between a rock and a hard place, Bennett — the mediator — refrained from straightforward expressions of condemnation, while his foreign minister Yair Lapid was more explicit in criticizing Russia’s war.

Three weeks later, when Ukrainian President Volodymyr Zelensky spoke in front of members of the Israeli Knesset, Bennett appeared to be shifting toward Kyiv. He insisted that Israel would stand by Ukraine, provide it with weapons and join the international sanctions against Russia. “You cannot mediate between the good and the evil” he said, probably implying that Ukraine was losing faith in Israeli mediation. Then, immediately after Zelensky’s speech, Israeli media wrote that Bennett was examining the possibility of travelling to Kyiv “if there were substantial progress in the negotiations.” But, in the end, no such journey happened. And as the carnage in Ukraine goes on, the prospects for Bennett’s mediation appear increasingly questionable.

As Ukraine keeps bleeding, Israel’s arguments for neutrality will begin to wear thin. It is hard to claim that Israel is protecting Jewish communities when Ukrainian Jews are dying in Russian attacks. If Israel’s mediation efforts remain unsuccessful, pressure on the Israeli government to adjust its position might grow from the inside and outside.

What would this look like? Israel has begun abandoning its favorite oligarchs, even if this means saying goodbye to their hefty donations. Two weeks into the war, the Yad va Shem Holocaust Memorial decided to cut ties with Roman Abramovich, while Lapid had allegedly warned ministers “not to help the oligarchs.” Israel still hasn’t joined the Western sanctions against Russia, but its banks have temporarily frozen the assets of Russian citizens. All these steps indicate that the situation has changed, and that Israel should consider not only the Russian presence in Syria, but also mounting Western pressure.

What is the worst-case scenario for Israel? For now, the coordination between the two sides is ongoing, yet it is clear that the clouds are getting darker. Russia’s tone towards Israel’s activities in Syria turned more hostile before the war, and is getting worse now. On March 24, the Russian ambassador in Syria warned that Israeli strikes are “provoking” Russia to react, one of the strongest Russian condemnations of Israeli operations there to date.

Even if coordination breaks down in the skies above Syria, it still seems illogical for Moscow to risk opening another front by taking on Israeli planes directly. However, as the last month has shown, Russian foreign policy logic can be difficult to predict. Faced with a renewed Syrian insurgency when Moscow is vulnerable, Putin might double down on aggressive policies in the Middle East to consolidate Russia’s ties with its few remaining allies and reassert its global and regional role. Worse, if Moscow really felt compelled to escalate, it might also sell more advanced weapons to Israel’s enemies or contribute to a nuclear race in the region.

But, despite these risks, the shift in Israel’s policy is real. In December 2021, Vyacheslav Volodin, the speaker of the Russian Duma, was supposed to pay a visit30 to the Knesset and even speak at a plenary session. Today, Volodin is under sanctions from the United States and European Union, while Zelensky had addressed the Knesset directly. As the situation on the ground develops quickly, the traditional Israeli position on Russia and Ukraine is being constantly challenged and, as a result, changing. Being a democratic country and an ally of the United States, Israel simply cannot afford to conduct its relations with Russia as if nothing has happened.

The op-ed was published in Texas National Security Review in March 2022.

Israel-Ukraine
Prev
All Publications
Next