Egypt, Jordan’s close ties with Israeli officials are now out in the open 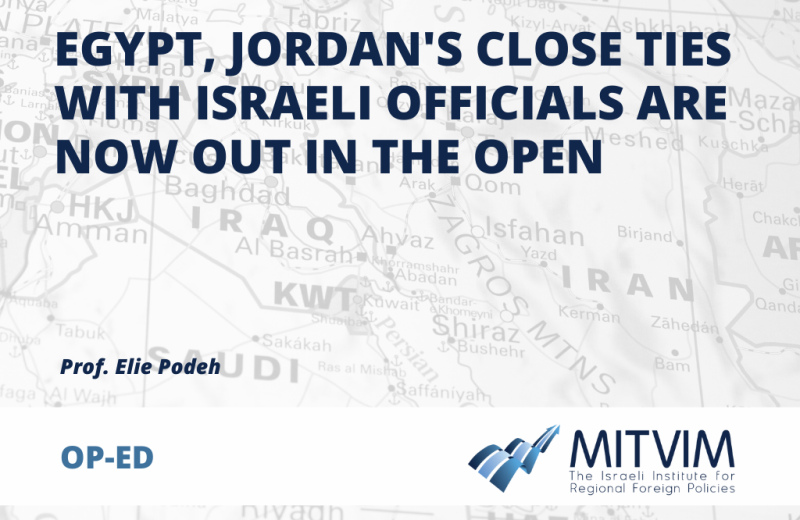 As the Russian war in Ukraine settles into a deadly routine, events in the Middle East are anything but routine. On March 18, Syrian President Bashar Assad visited the United Arab Emirates (UAE), ending a decade of isolation by the Arab world. On March 22, Israeli Prime Minister Naftali Bennett, Egyptian President Al-Sisi and Crown Prince Mohammed bin Zayed met in Sharm el-Sheikh. Three days later, Jordanian King Abdullah, Sisi and Iraqi Prime Minister Al-Kadhimi met in Aqaba. A senior Saudi minister was also present, although absent from the photo op. To top it all, Foreign Minister Lapid hosted the foreign ministers of the UAE, Bahrain, Morocco and Egypt in Israel this week. US Secretary of State Antony Blinken, on a tour of the Palestinian Authority, Saudi Arabia, the UAE and Morocco, also attended this unusual summit. What does all this mean?

Iran is obviously the main cause of this tumult. The impending nuclear agreement worries all countries in the region. The gradual US withdrawal from the Middle East and its determination to sign the deal with Iran brings its allies together to face a common enemy. Although US forces are located in Bahrain and Qatar, and perhaps elsewhere, countries in the region that fear Iran understand they must play a more central role, making Israel a dominant actor in these anti-Iran efforts, which include a proposed joint air defense system. Such cooperation may also include defense of the Gulf states (including Saudi Arabia) against Houthi attacks from Yemen, against which Israel can provide anti-missile interception systems, as well as drones. Morocco and Bahrain have also established cooperation with Israel in bilateral security agreements.

The top-level meetings allow Israel to update its Arab partners on its mediation between Russia and Ukraine. They also provide opportunities for each country to advance its interests. Egypt, for example, the world’s largest wheat importer, is concerned about the rising cost of wheat, gas and oil prompted by the war in Ukraine and seeks financial and economic assistance. Jordan shares similar concerns and is seeking to advance the January 2022 agreement with Iraq on an oil pipeline from Basra to Aqaba.

The summit meetings indicate the rising importance of the Emirates in the regional arena, which was the only player present at all these meetings. The UAE is also the main sponsor of Syria’s return to the Arab fold in hopes that Assad will restore stability and reduce Iran’s involvement in Syria. However, it should be remembered that the UAE, especially Dubai, also helped Iran circumvent Western sanctions. Moreover, in November 2021, the UAE declared its intention of “turning over a new leaf” in relations with Iran.

In December, Sheikh Tahnoun bin Zayed al-Nahyan, the UAE’s national security adviser, visited Tehran. The UAE’s communication channels with all the players in the region facilitate its role as intermediary. The position, when also backed by economic and military capabilities, positions the Emirates as a regional leader. Egypt and Saudi Arabia likely eyes this development with suspicion, but cannot prevent it given their economic weakness (Egypt) or non-existent dialogue channels with some regional actors (Saudi Arabia).

The relative rapprochement between Israel and Turkey, as reflected in President Chaim Herzog’s meeting with Turkish President Recep Tayyip Erdogan, and between Israel and Qatar, as expressed in a visit there by Israel’s top general Aviv Kochavi, both in the first week of March, also reflect the change in Israel’s regional standing. Bennett and Erdogan are said to meet soon.

The political competition between Israel’s government leaders – Bennett, Lapid and Defense Minister Benny Gantz – is an important aspect of these developments, with each trying to outbid his rival. Lapid cultivated a special relationship with King Abdullah and met with him twice, as well as inaugurating the Israeli embassies in the UAE and Bahrain. Gantz flew to Bahrain and Morocco to sign military agreements. Bennett decided to play key roles in both the international arena (Ukraine) and in the regional one, visiting Bahrain and the Emirates. The competition between Bennett and Gantz was reflected in the pair’s planned separate visits to India. This competition for prestige energizes relations between the countries, on the one hand, but also risks tensions with other countries.

The trilateral meeting in Sharm el-Sheikh, and now the Negev summit of foreign ministers is a milestone in regional politics, not only in terms of the participants’ ranks, but mainly due to their exposure to the limelight. Just six years ago, when then-prime minister Benjamin Netanyahu and opposition leader Isaac Herzog met with Sisi, Abdullah, and US Secretary of State John Kerry in Aqaba, they did so in secret. The fact that these leaders are no longer afraid to be seen with Israeli leaders is the significant innovation. It indicates that Israel is once again in the position of an acknowledged partner, rather than a hidden mistress.

The op-ed was published in JPost in March 2022.