The road to alliance in the Middle East is through Washington 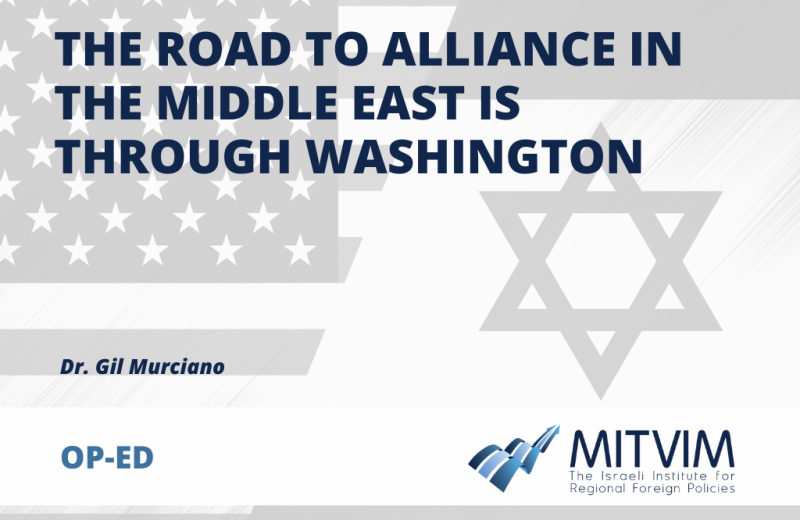 The nuclear deal now brewing in Vienna places Israel and the countries of the Middle East in a much worse position than they were in 2015 when the previous agreement was signed. Iran has since made significant progress in its uranium enrichment efforts and is only a few months away from the threshold of military-grade fissile material for a nuclear device. The one bright spot in this grim comparison between 2015 and 2022 is the Abraham Accords, with the potential for new strategic cooperation between Israel and the states of the region under threat from Iran.

Some would say that the Abraham Accords have not made a significant difference since intelligence cooperation between Israel and the Gulf states existed way before the accords were reached. However, the unveiling of those clandestine ties offers an opportunity for diplomatic cooperation and construction of “defense umbrellas” – multilateral security frameworks for Israel and its partners in the Gulf to cooperate against Iranian threats. Reflecting this significant change, Israel’s aspirations to promote a regional defense alliance resurfaced in recent talks between Israeli and regional leaders, with some even dubbing the ambitious undertaking “a Middle Eastern NATO.”

A strategic alliance between Israel and other Middle Eastern nations could undoubtedly bear significant fruits for Israel – not only in containing Iran’s regional influence, but also, and especially – in deepening Israel’s integration into the region and removing the concept of war from its relations with the moderate Arab states. However, it is absolutely clear that the talk of a regional NATO does not hold water.

The principle of collective defense in the foreseeable future is irrelevant in the relations between Israel and its partners in the Middle East because it would require the partners to respond to any attack on one of the alliance members as if they were attacked themselves. A scenario in which the Israel Air Force strikes Houthi targets in response to UAV attacks on the UAE or the Egyptian air force attacks Hamas targets in Gaza in response to missile attacks on Israel is highly unlikely.

Collective security is based not only on a confluence of interests but on elements of shared identity. Israel’s integration into the Middle East has made great progress in the past two years, but it is a far cry from a concept of shared identity. In any case, it is irrelevant as long as there is a fundamental disagreement between Israel and its potential partners on the question of where Israel’s borders should be drawn.

AT FIRST glance, this model appears to be applicable in the current state of relations between Israel and the Gulf states. The basis of such regional defense alliances is the existence of a common threat. In this regard, there is no doubt that Israel and the Gulf states face three shared threats: Iran’s efforts to develop military nuclear capabilities, its attempts to expand its regional influence – from Iraq through Syria and Lebanon to Yemen and Bahrain – and its military maritime operations, mainly in the Persian Gulf and the Red Sea.

However, while Israel and the Gulf states face a common threat, their set of constraints and their modus operandi are very different. Israel tends to view the region as divided into clear camps, with rigid and uncompromising lines separating them. Thus, we tend to place the UAE and Saudi Arabia (alongside Egypt) on our “side” in a zero-sum struggle against Iran.

An in-depth examination of the Gulf states’ strategy towards Iran over the past year presents a far more complex picture reflecting their efforts to play both sides of the fence, maintain open channels with Iran, and even seek understandings with it. The Emirati national security adviser’s visit to Iran last December, and the resumption of dialogue between Saudi Arabia and Iran last year, demonstrate the key principle guiding the Gulf states’ strategy working with all the players on the field – including and especially Iran – to reduce risks to their own security.

One can understand the Gulf states. Given the current circumstances, they cannot afford to play Israel’s zero-sum game against Iran. Although the United Arab Emirates is a regional power with notable influence from the Indian Ocean to the Horn of Africa, it is also a small country with limited military capabilities, which shares a long maritime border with Iran. Its energy production facilities and maritime trade routes are very vulnerable. The Emiratis and the Saudis also recognize the limitations of American intervention in the event of an escalation with Iran. The Trump Administration’s limited response to the 2019 attack on Aramco facilities in Saudi Arabia made it clear to the Gulf states that in the event of a military attack, the most they could hope for from the US are economic sanctions.

Entering into a security alliance with Israel will impair the Emirati ability to balance its risks and put an end to its multilateral juggling. It will place the UAE on a direct collision course with Iran. These considerations explain why many in the UAE (and even more in Saudi Arabia) would be reluctant to underpin the Abraham Accords with an overt security pillar.

The US is the only actor whose strategic assets can provide the necessary incentives for the Gulf states to engage in overt security cooperation with Israel. These include CENTCOM forces in Qatar, the 5th Fleet, American sponsorship of the International Maritime Security Construct based in Bahrain and the symbolic but important presence of US forces in eastern Syria.

AMERICAN SPONSORSHIP of a regional alliance, however, would require a fundamental change and an almost complete reversal of Washington’s current approach to the Middle East. The past year has emphasized the waning US commitment to this arena, if not its actual withdrawal, as it shifts resources to the conflict with Russia and China.

The American approach occasionally seems to be intent on tying up loose ends in the Middle East in order to focus on more important goals. Its willingness to consider the removal of the Iranian Revolutionary Guard Corps from the list of terrorist organizations bolsters this impression.

Nonetheless, the impending nuclear agreement with Iran provides an opportunity to redefine US relations with the countries of the region. Since the nuclear deal will not address regional issues, the countries of the region, including Israel, should strive to obtain separate security guarantees from the US and the international community to contain Iran’s regional activities. The US interest is clear – an aggressive Iran will undermine regional stability and open the door to a broader regional conflict damaging energy production and global trade routes. It would also indirectly enable their major rivals, Russia and China, to expand their influence in the region.

Israel has a special role to play in creating a strategic relationship between the US and the region. Its strategic relationship and political influence in Washington have been proven as pivotal incentives for regional partners to establish relations with Israel, from the Camp David agreements with Egypt to the signing of the Abraham Accords.

The recent Negev Summit emphasized Israel’s unique role as a liaison between the Gulf states and the United States – especially in light of the cooling of US-Gulf relations in the Biden era. The roles have thus been reversed. Whereas the US previously enabled the development of Israel’s relations with the Gulf states through its sponsorship resulting in the Abraham Accords, Israel is now maintaining and bolstering relations between the Gulf and Washington, if not for their sake, then for its own.

The nuclear deal taking shape in Vienna is far from perfect – it is probably the lesser of the evils that Israel will have to accept given the Trump administration’s reckless pullout from the original agreement. But it opens the door to unprecedented strategic cooperation between Israel, the US and the Gulf states to complement the elements they view as glaringly absent from the deal.

The strategic dialogue that began last week in Sde Boker redefines Israel’s strategic importance for the region and the value of its integration. Israel should cement these ties, not in a confrontational move vis-à-vis the US, rather as an alliance that includes the United States as an integral part of the regional architecture.