President Herzog’s Visit to Turkey: How to Proceed? 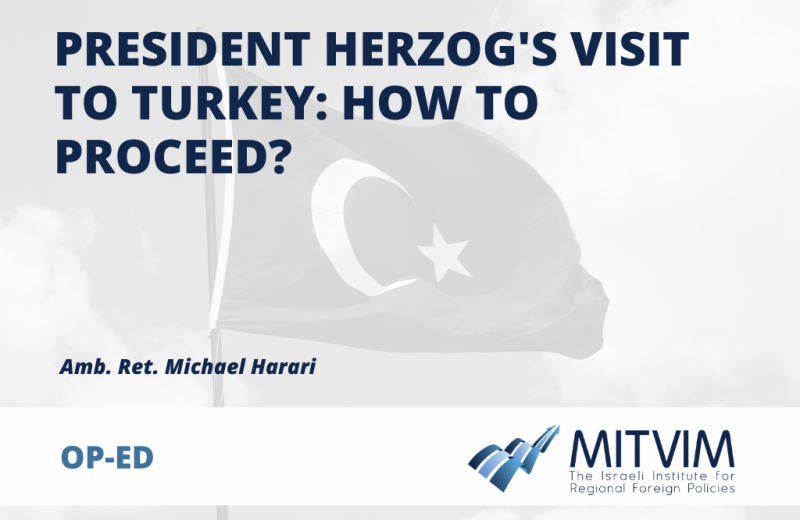 Israeli President Herzog’s visit to Ankara (March 9), for the first time since 2008, is a recent attempt to open a new page in the relations between the two countries. There have been ups and downs in the relationship between Israel and Turkey over the years, sometimes quite dramatic ones. Despite the absence of political discourse between the two governments in recent years, an impressive and constant volume of trade between the two has continued.. No tangible results have yet been recorded following the visit, but a visit by the Turkish Foreign Minister to Israel is expected next month (and perhaps the Energy Minister as well?).

If So, How Do We Proceed From Here?

First, it is crucial to remember that the two countries came to the intersection from different directions and with different expectations. The past few months, Turkey has initiated a series of moves aimed at improving relations with countries in the region, including Israel, Egypt, and Gulf states, like Saudi Arabia and the United Arab Emirates. There are a number of reasons for these attempts, including a number of issues with the economy, its current regional status, considering increased cooperation within the region over the past few years, and upcoming presidential elections. Turkey has succeeded in warming up diplomatic relations with the United Arab Emirates, to a certain extent, with Saudi Arabia, and now with Israel as well. President Erdogan’s comments at the joint press conference with President Herzog emphasized his desire to open up a new chapter in relations, but they also well reflected his expectations: cooperation with Israel and rapid progress in the energy sector, and, most concretely, Israeli gas exports to Turkey. Israel has reached this political crossroads from a different direction. As a result of the new regional architecture in the eastern Mediterranean and the Abraham Accords with the Gulf states, Israel has a convenient position from a strategic and political perspective. In this regard, the agreements to export gas from Israel to Egypt and Jordan, as well as the establishment of the Regional Gas Forum (EMGF), are compelling examples. Israel has always seen Turkey as a very important regional player with whom improving relations is in Israel’s interest as well as in the interests of the region. During the last decade, there have been significant changes in the relations between Israel and Turkey: the mutual interests that used to exist have diminished and weakened, and trust between the two countries has declined substantially. As a result, President Herzog’s visit and the return of political dialogue at the highest levels mark a positive and refreshing step forward. This state requires careful and measured conduct, as well as the necessary coordination of expectations, to avoid disappointment, or crisis, from the beginning.

From an Israeli point of view, two non-trivial challenges are required at the political level: building trust between the two governments and re-formulating the meetings of interests between the two countries. This is a complex, but certainly possible, process that requires strenuous work in the near term. It is obvious to both parties that cooperation in the energy field requires agreements on the economic level (price of the gas, rout and other expenses), but more importantly: on the political-strategic level as well. In other words, this is not just an ordinary economic product, but one that is extremely important in its political foundation, some would actually call it a precondition. In light of the circumstances in the eastern Mediterranean, and in view of the deep disagreements, it seems that this is an issue related to sovereignty for key players in the region, including Turkey. It cannot be ignored. As part of Israel-Turkey’s political dialogue, it is important to discuss the recent institutional developments in the eastern basin of the Mediterranean in a serious, comprehensive, and honest manner.

Israel has already emphasized that its relations with Turkey won’t be developed on the expense of those with Greece and Cyprus. The same is considering its relations with Egypt. The inclusion of Turkey within the regional exercise is of a vital importance and necessity, but let us be honest, this is a real challenge, which requires a creative dialogue, and as stated, on the base of renewed trust. It is an achievable task.

The war in Ukraine poses a serious challenge to the international system in general. In our case, Israel and Turkey are each faced with complex dilemmas in this regard, and for the most part, there are considerable similarities in the way they deal with and debate it. It is of vital importance for both of them to analyze what kind of common understanding could arise for them facing this enormous crisis.

Thus, the two countries are at a crossroads of fascinating and promising opportunities. The renewed dialogue should be conducted calmly and sensibly, despite the troubling times and the urge to move forward quickly in order to avoid premature crises. By the way, returning ambassadors to the two capitals is a necessary first step, and one that doesn’t cost too much.

The op-ed was published in Turkish Policy in April 2022.