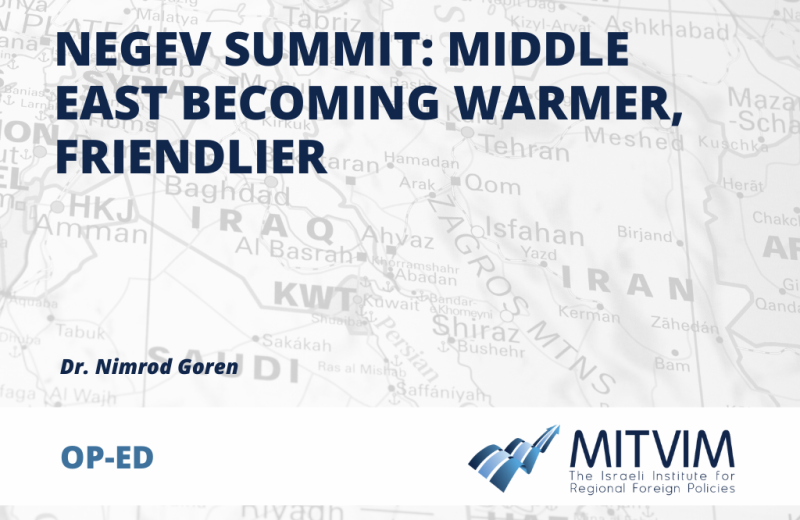 The public elements of the Negev Summit were full of positive atmosphere, expressions of personal warmth, and mutual compliments. It did not seem as one of those summits in which concerned leaders gather urgently to confront a shared external threat (in this case, Iran), as some anticipated before the summit took place.

Rather, it looked like a meeting of forward-looking statesmen, who are setting a positive agenda, highlighting partnership and cooperation, and seeking to ensure a better future for their people and for the region.

The closing remarks of the foreign ministers who participated in the Negev Summit included messages of warm peace, which were absent for decades from Israel-Arab relations. The guests from the UAE, Egypt, Morocco and Bahrain spoke about upgrading diplomatic ties, fostering people-to-people relations, learning curiously about each other, deepening connections between people, broadening cooperation, fulfilling potential, and advancing prosperity.

They spoke about multiple and diverse fields of diplomatic, security, economic and civilian cooperation, and highlighted the importance of concrete steps that will bring actual benefit to ordinary citizens.

The decision, announced by Foreign Minister Yair Lapid, that the summit will be turned into a recurring event is a positive outcome. Israel, as well as Egypt, gained experience in recent years in setting up regional cooperative mechanisms in the Mediterranean – via the Eastern Mediterranean Gas Forum (EMGF), triangular relations with Greece and Cyprus and participation in regional organizations such as the Union for the Mediterranean.

Now, it seems like the time has come and conditions are ripe to transfer modalities and insights from these processes to the Middle East.

In the longer term, efforts should be made to leverage the Negev Summit into more than a periodical meeting of foreign ministers, and to consolidate a permanent forum, with concrete goals, specific working groups, and joint projects.

To maximize the benefits from such a forum, it is important that it also include Jordan and the Palestinians, just as they are members of the EMGF. There, Israel agreed to equal representation of the Palestinians on a state level and this could be replicated also in a Middle Eastern forum, should one take shape.

IT IS already clear that the Negev Summit was a substantial diplomatic achievement for the Israeli government, foreign minister and foreign service. In his first year in office, Foreign Minister Lapid hoped to achieve new normalization agreements with additional countries.

This has not materialized yet, but the deepening and upgrading of the existing normalization process, as well as the willingness of Egypt to draw closer to the “warm peace club,” are significant achievements that are full of potential.

Egypt, which has for years limited its cooperation with Israel mostly to security affairs, is increasingly showing openness to cooperation in other fields as well. The Egyptian foreign minister spoke clearly about that in the summit.

The Negev Summit, as well as other recent developments in Israel-Arab ties, reflect the empowered status of Israel’s Foreign Ministry. After consecutive years in which Israel’s foreign service was deliberately weakened by Netanyahu, Israeli diplomats are now playing a central role in shaping regional relations and are finally fulfilling their professional potential.

Also, after years in which the Foreign Affairs Ministry kept a low public profile in Israel, its diplomats are now regularly and freely granting interviews to local media, in which they provide context and information about events and developments, and more importantly, they reflect the importance of diplomacy and of a well-functioning foreign service to the Israeli public.

Countries in the region, which have yet to normalize ties with Israel, are following recent developments in Israel-Arab relations. As regional cooperation brings more tangible benefits – and the Negev Summit is expected to help make that happen – and as warm and open interaction between Arab and Israeli officials becomes the new norm, additional countries are likely to opt for increased relations with Israel – whether in public or behind closed doors.

And, in case the normalization process will also be leveraged to progress in Israeli-Palestinian peacemaking, with the support of Arab countries with which Israel now enjoys mutual trust, the benefits will be much bigger: for Israelis and Palestinians who will enjoy more peaceful relations, for countries in the region that will find it easier to normalize with Israel and for the prosperity of the people of the region.

The warmth that characterized the Negev Summit is expected to make the Middle East an even warmer region, and this time, it is for the best.