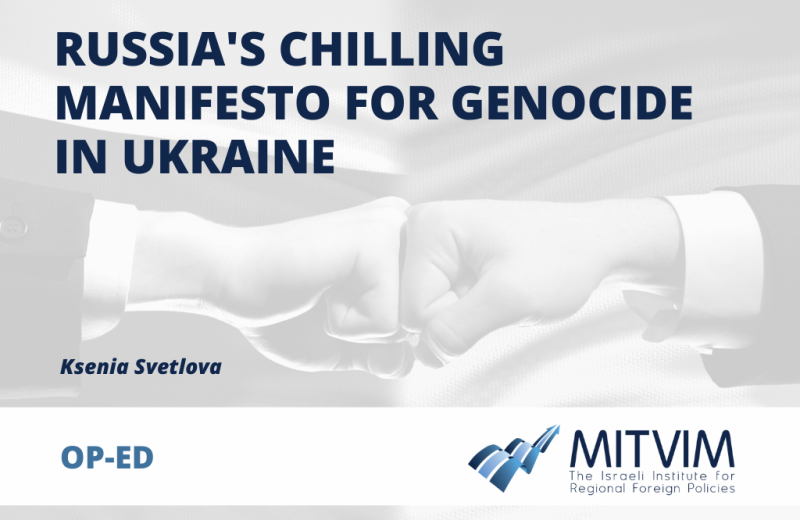 “The peculiarity of modern, nazified Ukraine is in its formlessness and ambivalence, which disguises Nazism as a desire for ‘independence’ and a ‘European’ (Western, pro-American) path of ‘development’…The denazification of Ukraine is also its inevitable de-Europeanization…’Ukronazism’ poses a much bigger threat to the world and Russia than the Hitler version of German Nazism.” Timofei Sergeitsev, “What Russia should do to Ukraine,” RIA Novosti, 3 April 2022 (English translation here)

The Russian government and its propaganda machine has not, and will not, acknowledge any of the atrocities perpetrated by Russian soldiers in Ukraine – in Mariupol, Bucha, Berdyanka or anywhere else.

First of all, according to the Kremlin, there is no war going on in Ukraine. Second of all – the Russians soldiers there only hit military targets, and as for destroyed cities and slain citizens – they’re the cynical manipulations of the Ukrainian army or local defense battalions who committed those actions themselves in an attempt to defame Russia’s good name.

So when the whole world, horrified by the war crimes revealed in Bucha, asks: “What is next for Russia?” weighing more sanctions and punitive actions against Moscow, the Russian leadership is focused on a parallel question: What’s next for Ukraine?

Whoever thought that failing to blitz Kyiv into submission would derail President Vladimir Putin from his original plan, to return the disobedient Ukraine to its natural subjugation under Russian wings, must revisit their assumptions. Over the last few days, Russia’s propaganda operation has escalated its efforts to explain the logic beyond this “special military operation.”

An op-ed published by RIA Novosti (Russia’s state-owned domestic news agency) written by Timofei Sergeitsev, a writer and a filmmaker who once used to consult for Ukraine’s pro-Russian presidents Leonid Kuchma (1999) and Victor Yanukovich (2004), offers a brutal manifesto for Russia’s plan for Ukraine: a horrifying view of an imperialist ideology that calls not only for denazification, but also for de-Ukrainization and eventually, the dismemberment of Ukraine, “brought back within its natural boundaries and stripped of political functionality.”

While Putin’s references to denazification in his last speech just days before the war were rather vague (was he referring to the Ukrainian government? To specific Ukrainian battalions, like Azov or Aydar?) Sergeitsev is both specific, and comprehensive, about whom the Nazis are and how hard Russia has to hit them.

Sergeitsev explains in his propaganda master-class that: “Denazification is necessary when a significant part of the people, very likely its majority, has been cowed by the Nazi regime and drawn into its political agenda. That is, when the hypothesis ‘the people are good – it’s the government that’s bad’ does not work.”

He describes at length, how (unlike Georgia or the Baltic states) “the modern Ukrainian nation state is a failure,” because any attempt to build such a state will lead to Nazism. “Ukrainism is an artificial anti-Russian construction that lacks any civilizational substance.”

During the last few years, Sergeitsev has written numerous op-eds about Ukraine and the danger that it presents to the Russian state and the Russian people.

He is a regular guest on the talk shows of Vladimir Soloviev, a top Putin propagandist who has made it on to the EU and U.S. sanctions list. He likes to call Ukraine “country 404,” a riff on the internet error message that appears when a link leads to a page or resource that does not exist, in order to imply that Ukraine is a fiction that doesn’t exist in real life.

And who is to decide whether Ukraine is a successful or a failed state, and thus whether it deserves a national identity, individual freedoms and sovereignty?

It’s Russia, says Sergeitsev, echoing the country’s own leaders – Putin and former Russian president Dmitry Medvedev. The latter said just recently that “Deep Ukrainianism, fueled by anti-Russian poison and all-consuming lies about its identity, is one big fake,” and continued: Ukraine has become “the Third Reich” and will share its fate. Sergeitsev declares that Russia will be the post-war “guardian of the Nuremberg Trials.”

According to this ideology, the soldiers who fight today against Ukrainians are not fighting against humans but against Nazis, and since a large portion of population voted for its government (called by Sergeitsev, Soloviev and others, “Bandera’s gang,” after the WWII Ukrainian nationalist who allied then broke with Hitler) it is equally infested by the Nazi bacillus.

The horrifying outcome of this logic is that the civilian population, immutable collaborators with Nazism, cannot and must not be spared, just as civilians weren’t spared during the firebombing of Dresden at the end of WWII. Putin, who served in Dresden as a KGB officer, often speaks about Dresden. He knows the story well.

After dehumanizing Ukrainians (Russia’s key propaganda goal), denying them the right to an unique identity different from a Russian one, after justifying atrocities (“the punishment must be harsh”) and glorifying repression, re-education and Ukrainian suffering (“tragedies and dramas are good for those nations seduced to become Russia’s enemy”), Sergeitsev finally explains what Russia – an imperial power tasked with “decolonizing Ukraine,” in his own words, and a state unashamed to flaunt its strength – needs to do to Ukraine next.

The only way to control Ukraine and its inherently Nazi character is to dismember it. The east of the country should be annexed by Russia, while “the Catholic regions,” western Ukraine, “will remain hostile to Russia, but it will be neutral and demilitarized, and Nazism will be banned there. The haters of Russia will go there.”

And what would “guarantee” the quietist subjugation of rump Ukraine and its compliance with Russian diktats? The “threat of an immediate continuation of the military operation,” says Sergeitsev. He also speculates whether ensuring a neutral, and neutralized, residual Ukraine may require “a permanent Russian military presence on its territory.”

No Marshall Plan for Ukraine sponsored by the West must be allowed. No process of Westernization, no return to Europe, can take place after the war. Ukraine must (in language somewhat reminiscent of the Iranian Revolution’s ideologists) “free itself from the intoxication, temptation, and dependence of the so-called European choice.”

Moscow has scripted a different future for Ukraine: To join an alternative, but as yet imaginary, axis, that Medvedev envisions as an “open Eurasia, from Lisbon to Vladivostok.”

This manifesto of hatred, that integrates many features of fascism, resonates with the ideas and assumptions that have floated around in public discourse during the last few years in Russia. While Sergeitsev’s piece isn’t an actual Kremlin action plan, military and political, for Ukraine, it reveals much about how the ideologists and supporters of this war envisage the post-war future – a crushed, dismembered, hollowed out Ukraine lacking any political will, cultural identity, army or independence.

How long will the war in Ukraine last? How long is Russia prepared to dig in? Will the imminent, and highly resonant anniversary next month – May 9th, Victory Day over Nazi Germany – trigger further Russian military escalation beyond conventional weapons?

Timofei Sergeitsev’s op-ed leaves no room for optimism: Russia sees Ukraine as a battleground not only for tanks and missiles, but for an ideological war between Moscow and the collective West. The stakes are existential for Moscow, and therefore for the sake of victory in this war anything can (be allowed) to happen – torture, murder and even genocide.

Russia, under Putin, will not rest until it can broadcast an image of its victory over “the Nazis” and forcefully expand its sphere of influence. As long as Putin’s regime stays in power, Ukraine and Ukrainians will not be safe. It is just as doubtful whether Kyiv will even be allowed to recover.

The question is what will happen if Russia can’t achieve this goal using conventional weapon. Its propagandists aren’t shy of reminding the world that Russia always has other, even more frightful and devastating options.

The op-ed was published in Haaretz in April 2022.