Arab-Israelis have no appetite for another wave of violence 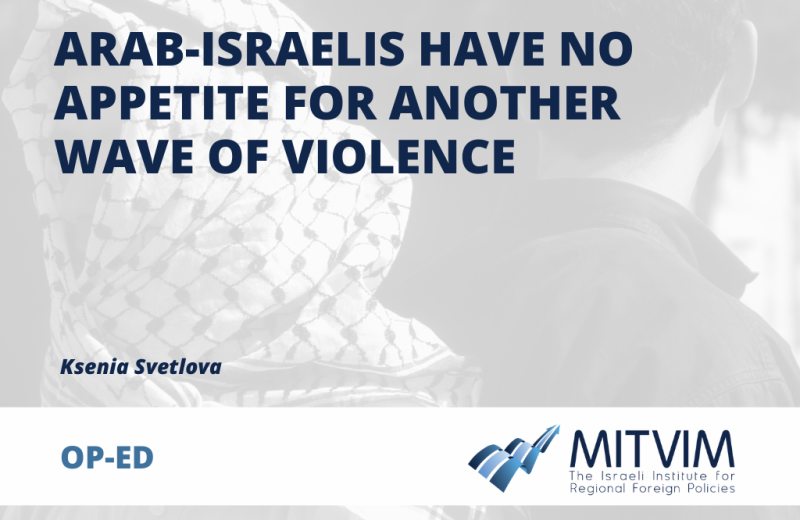 Soon after the first terror attack last month in the southern Israeli city of Beersheba that launched the current wave of violence, Sheikh Muhammad Abu al-Qiyan, maternal uncle of the terrorist – also named Muhammad Abu al-Qiyan and a resident of the Bedouin village of Hura, made an appearance on Israel’s Channel 12.

“The whole tribe condemns this attack. We do not support it at all. We also despise ISIS. This deed and this guy, even though he was my nephew, do not represent us,” said Abu al-Qiyan. He repeated this message several times, speaking to the Hebrew media to explain how it could be that his relative – a father of five – was suspected of loyalty to ISIS, was arrested, served four years in an Israeli jail, and then one day woke up and slaughtered four Israeli citizens, two men and two women. But as tension mounted, many in Israel expressed doubts about the sincerity of his condemnations.

It was not only the heads of the Abu al-Qiyan tribe that denounced the Beersheba terror attack, as well as the next terrorist attack that took place in the northern Israeli city of Hadera and was carried out by residents of the Israeli Arab city of Umm al-Fahm.

At a conference earlier this month of the Institute for National Security Studies at Tel Aviv University, Mansour Abbas, the leader of the United Arab List-Ra’am party, the first Arab party to become a member of a ruling government coalition in Israel in the last three decades, said, “The whole of Arab society has come out against the latest wave of terrorist attacks – even people who are in opposition to me. It does not detract from the severity that Israeli Arab citizens carried out the attacks that opened this wave. It is inconceivable for someone to come and decide that he is taking the lives of innocent people – this must be a basic value rule that has nothing to do with anything else. Secondly, there is a citizenship contract between us of living together – such acts violatethe contract.”

Abbas’ words also correlate with a recent survey conducted by the Hebrew University of Jerusalem’s aChord Center, which specializes in the social psychology of intergroup relations. According to this survey, 98% of Arab citizens of Israel oppose acts of violence against Jews. Some 93% of Arab citizens think that the perpetrators do not representArab society.

“There is a lot of hypocrisy there. The Jews, or at least some of them, always demand that we condemn these acts. And we do it – I do it – without being forced by anyone, simply because we believe that it is right. But the Arab public is not a condemnation machine. Also, I almost never see Jewish politicians rushing to condemn after Arabs are being beaten or killed by Jews,” Afif Abu Much, a political analyst and a columnist for Arab media outlets, told the Media Line.

But despite the explicit condemnations of the terror wave by the leaders of Israeli Arabs, and by Palestinian Authority President Mahmoud Abbas and the heads of several Arab states, the situation in Israel remains tense. Thirteen men and women, Jews and Arabs among them, as well as foreign nationals, have been killed in four terror attacks during the last two weeks.

Two out of four attacks were carried out by Israeli Arabs. Following the attacks, social media was filled with expressions of joy over the killing of Israeli citizens, including by residents of Umm al-Fahm and other Arab cities in Israel.

“There is great anxiety about the fact that, in the current wave, Israeli citizens have a very dominant presence and in fact this time they were the ones who provided inspiration for other attacks. That’s why Mansour Abbas and others were fast to condemn. Also, there is a lot of concern among the Arab leadership in Israel and among everyone who is considered an enemy by ISIS – women, Christians, LGBTQ, and even the Muslim Brotherhood,” Dr. Michael Milshtein, head of the Palestinian Studies Forum for Middle Eastern and African Studies at the Moshe Dayan Center at Tel Aviv University, and a senior analyst at the Institute for Policy and Strategy, told The Media Line.

“I and many others continue to argue that ISIS is a marginal phenomenon in Arab society.” Milshtein believes that very few individuals or activists are genuinely affiliated with ISIS.

“The attitude of the majority of the public is complete denial and even nausea of thesetypes, but the effect of their deeds is very harmful,” he says.

According to Israeli security services, adherence to ISIS among the Arab sector in Israel has never been significant. However, during the Israeli military operation against Hamas in May, one of the most popular figures among the Arab youth in Israel was none other than Hamas leader Muhammad Deif, as well as Abu Obeida, the spokesperson for Izz ad-Din al-Qassam Brigades, the military wing of Hamas.

At the beginning of the week, Samir Saadi, deputy mayor of the northern Israeli city of Nazareth, wrote a Facebook post in which he expressed condolences over the death of the Islamic Jihad operative who was killed by Israeli troops during clashes in Jenin on Saturday. “Our condolences to the cousins in the Jenin camp. I ask Allah to receive him with the martyrs, the righteous and good friends,” read the post.

he post provoked many angry emotions in Israel, where the people have not yet recovered from the long manhunt after the terrorist who killed three Israeli citizens and wounded several others on the streets of Tel Aviv on Thursday night. In addition, the mass funeral of two terrorists in Umm al-Fahm made many Israelis wonder whether their heinous act of hate was a reason for pride and happiness in some Arab citizens of Israel.

Then, Ayman Odeh, the head of the opposition Joint List of predominantly Arab parties made a statement near the Old City of Jerusalem’s Damascus Gate that added more fuel to the fire.

“It is humiliating for one of our sons to join the security forces of the occupation. The forces here are humiliating our people, humiliating our families, and humiliating everyone who comes to pray. Our position is that we will be with our people to end the murderous occupation so that Palestine will rise, Palestinian flags will be hoisted on thewalls of Jerusalem and peace will spread on the land of peace. The young people must not join the occupying forces. Throw your weapon in their face and tell them that our place is not with you. We will not be part of the injustice and the crime,” Odeh said in avideo statement posted to social media.

While the Knesset House Committee said it will convene “as soon as possible” to discuss Likud lawmaker Shlomo Karhi’s request to dismiss Odeh from the Knesset, some Arab leaders were openly blaming him for hypocrisy.

In an interview with Israel’s Reshet Bet public radio station, Faez Abu Sahiban, the mayor of Rahat, a Bedouin city in southern Israel, said, “Odeh is living in a completelydifferent country; he must wake up. He must support this government and help the bloody Arab population.” During the interview, Abu Sahiban also suggested that Odeh come to Rahat and collect the illegal weapons there “by himself.”

Experts believe that this spring does not have to be a repeat of the dramatic events of last year. “A lot of what happened last year was triggered by the events in Al-Aqsa Mosque. That is what boils the blood of the Arabs – in the West Bank, Gaza, Israel, and beyond. As long as nothing happens in Al-Aqsa, it will not develop into a wave of violent events like the ones that shook our lives a year ago,” according to Abu Much.

Mohammad Darawshe, director of planning, equality, and shared society at the Givat Haviva center and a head of the joint Arab-Jewish Ma’an party, shares this view. He says the deterioration to violence is still preventable.

“If the leadership will choose to prevent the violence, it will be able to do it,” Darawshetold The Media Line. “There are those who want to make a political career out of ridingthe wave of violence, to make a political profit. There is of  course Knesset member Itamar Ben-Gvir, he is the most radical one, but also the leader of the opposition,Binyamin Netanyahu, is adding fuel to this fire.”

“I wish that these acts of violence would not happen, but they did. The government today is doing the right thing, trying to prevent a spillover to other places, allowing the Palestinians to come to Al-Aqsa Mosque to pray. It may help to calm the situation down,” Darawshe said.

Israeli Arabs
Prev
All Publications
Next