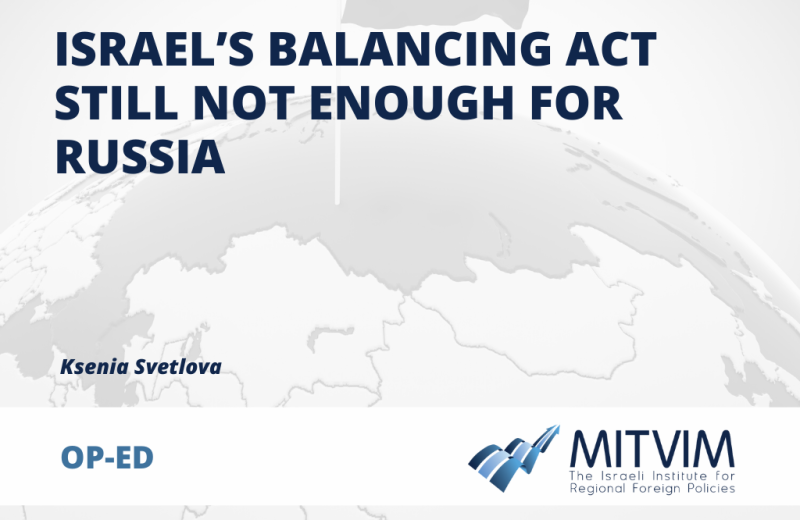 Since the beginning of Russia’s war on Ukraine, Israel has been struggling with a balancing act: tiptoeing between pleasing its Western allies and keeping in check its powerful Russian-influenced neighbor on its northern border, Syria.

Today it seems that Israel’s attempt to stay as neutral as possible on the conflict between Russia and Ukraine – for example, Israel did not join the Western countries’ sanctions against Russia and declined to sell weapons to Ukraine – has not succeeded in pleasing Moscow.

Earlier this month, Israel voted at the United Nations General Assembly in favor of removing Russia from the UN Human Rights Council.

“There was a poorly camouflaged attempt to take advantage of the situation in Ukraine to distract the international community’s attention from one of the oldest unresolved conflicts – the Palestinian-Israel one,” Russia’s Foreign Ministry said in a statement over the weekend, reacting to Israel’s vote and to Foreign Minister Yair Lapid’s statements regarding the suspension of Russia’s membership in the UNHRC.

Lapid said Russia’s “unjustified invasion” of Ukraine and the “killing of innocent civilians” were the reason that Israel voted in favor of the motion and that the vote “doesn’t change our view of the UN Human Rights Council, which is a radical, morally flawed, biased and anti-Israeli body.”

The Russian Foreign Ministry statement also said, “The Israeli Foreign Minister’s statements evoke regret and rejection,” leaving no doubt: Moscow is watching every move and every word of Israeli officials and it has in its arsenal plenty of poisonous arrows.

On the same day, Russian President Vladimir Putin reportedly sent an appeal to authorities in Israel in which he asked that the Russian government be permitted to register its property rights to the Alexander Courtyard in Jerusalem. Last month, the Jerusalem District Court canceled the registration of the Russian government’s ownership rights to the property, which former prime minister Benjamin Netanyahu approved in 2020. Russian officials have harshly criticized the Israeli backtrack on the issue.

According to Ephraim Sneh, a retired IDF general and a former deputy defense minister who was a member of several Israeli government cabinets, the current Russian reaction to Israel’s policy on Ukraine was “expected.”

“We are well aware of their position on the Palestinians and this kind of reaction was indeed anticipated,” Sneh told The Media Line.

Roman Bronfman, a former Israeli lawmaker and an expert on Russian affairs, characterizes the current Russian reaction as “traditional Russian political and diplomatic games – hypocritical and ambiguous. Russia is not a neutral country here in the Middle East. It has close ties with many terrorist organizations here. Look at Israeli borders – we are surrounded by Hezbollah and Syria in the North, and by Hamas and other Palestinian military groups in Gaza and in the West Bank. All of them are supported by Russia.”

Bronfman believes that although the use of the Palestinian card by the Russians in the midst of the deadly war in Ukraine is merely cynical, he acknowledges that the Russian claims also contain a real argument.

“We certainly don’t need a Russian protectorate on our northern borders, however, we are obliged to find a diplomatic solution to the conflict with the Palestinians and we must strive to resolve the conflict,” he said.

Sneh points to future developments with regard to the continuation of Israeli control of the Palestinian territories.

“We have to understand that the war in Ukraine will add to the delegitimization of the occupation. Perhaps this development doesn’t preoccupy Israeli policy-makers right now, but they have to take into account that this scenario is quite likely,” Sneh said.

Bronfman, who was born in Ukraine, believes that no additional pressure will be applied on Israel while the world is focused on the war in the besieged country.

“I’ve heard these claims, and I do not support them. I don’t think that there will be extra pressure on Israel. The Russian war on Ukraine is a global war, and all diplomatic efforts will be concentrated in this direction,” he said.

“Also, our conflict with the Palestinians is entirely different from the war on Ukraine. We experience an ongoing ethnic and religious conflict, the other side used terror to achieve its ends and it cannot be compared to the fascist attack on Ukraine.”

THE RUSSIAN Foreign Ministry’s statement on Israel’s vote in the UN was released on the eve of Passover. On the same day, Sergei Stepashin, chairman of the Imperial Orthodox Palestine Society and a former prime minister of Russia, told the journalists in the city of Sergiev Posad that Putin appealed in writing to Prime Minister Naftali Bennett in order to return ownership of the Alexander Church compound in the Old City of Jerusalem to Russia.

“This is a unique case,” says Stepashin. “So, we’ll put pressure on this situation.”

In early March, Judge Mordechai Kaduri of the Jerusalem District Court decided to cancel the decision giving the registration of rights to the Alexander Compound to the Russian Federation, following a petition by the Imperial Orthodox Palestine Society, which had previously owned the property.

The Russian Foreign Ministry stated that on December 30, 2019, Israel announced a formal decision to transfer ownership of Alexander’s Court to Russia, and even published a document confirming this transfer.

“Now we are fighting for the return of the Alexander Compound, and it is very difficult: We were almost there, we worked for five years, we found all the historical documents, but the situation with Ukraine had occurred, and Israel behaved as it often does – playing with both sides, trying to ping-pong with everyone,” said Stepashin, making a direct connection between the Russian battle for the historic building in the midst of Old Jerusalem, the war in Ukraine and Russian relations with Israel.

According to many Israeli officials, the real burning question here involves Syria and Iran. In the past, Russia often tried to revive the Palestinian issue in order to sting Israel or increase its dominance in the Arab world. However, there is little doubt that, unlike Syria, the Palestinian issue is not Russia’s first priority in the Middle East.

After the war in Ukraine was launched, only a few countries enthusiastically supported Russia – one of them was Bashar Assad’s Syria and another was Iran. During the last few weeks, Russian and Iranian diplomats and businessmen have met several times, and promised to increase cooperation and trade.

LAST WEEK, negotiations between an Iranian trade delegation and a Russian government official and directors of major Russian companies concluded with an optimistic promise of increasing the trade volume to $10 billion annually during the next two years. Russia might also sell its advanced weapons to Iran, especially if Iran signs a revived nuclear deal, the Joint Comprehensive Plan of Action agreement, with the world powers, including the United States.

This forced rapprochement, for lack of other options, means that Moscow could inevitably prevent Israeli strikes on Iranian targets in Syria.

Sneh believes that if Russia decides to clash with Israel in Syria, it will only do so to promote its own interests.

“Despite the rapprochement with Iran, Russia will only act according to its own interests. It will not risk anything for the sake of the Iranians,” he said.

“I believe that currently they don’t need another entanglement. However, if Moscow will decide to change its strategy vis-à-vis Israel in Syria, the situation could get very tough for us. This is the most important and critical issue for Israel. At the end of the day, I believe that the conflict with Iran – which is expanding its presence in Syria and in Lebanon – is unavoidable.”

Three weeks ago, Alexander Yefimov, the Russian ambassador to Syria, blamed Israel for “provoking Russia to react to its actions in Syria,” adding that Israeli airstrikes aim at an “escalation of tensions in order to allow the West to carry out military activities in Syria.”

At the moment, the Russian-Israeli deconfliction center over Syria continues to work as usual. Just last week, Syrian media reported that the Israel Air Force made a rare daylight strike on the Masyaf area in central Syria, where Iranian forces and pro-Iranian militia bases are located. For now, it seems that business in Syria continues as usual, however it’s difficult not to notice the warning signs and the black clouds on the horizon of Israeli-Russian relations