Assessing Operation Guardian of the Walls: Did it change any opinions? 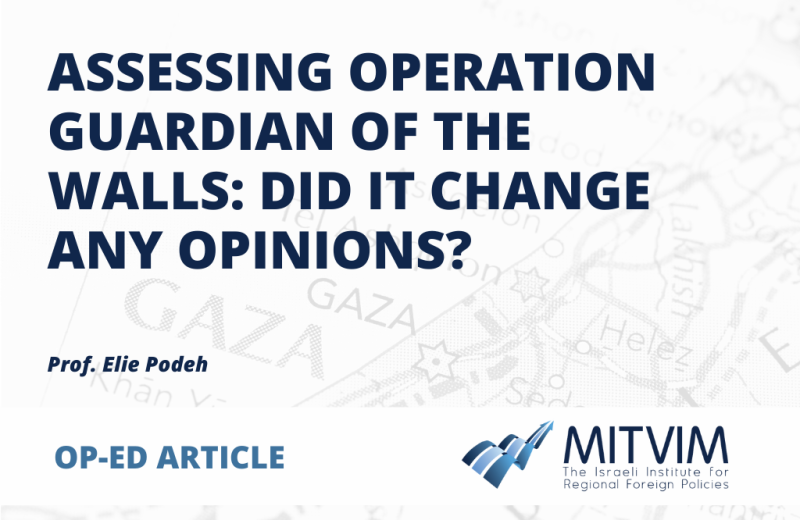 Historians may agree that it is still too early to evaluate the results of the recent events in Israel and Gaza, but our limited historical perspective might suggest that several Israeli wide-held conceptions have been shattered.

The first relates to Israel’s intelligence assessment that Hamas is not interested in escalating its struggle against Israel and is focused on its domestic concerns. The way Hamas has engaged with Israel since May 10 indicates that its plans and capabilities were primed, awaiting the right moment. The simultaneous Jewish and Muslim holidays – the end of Ramadan, Lailat al-Qadr, Jerusalem Day and the “Nakba” anniversary – along with recent Israeli-Palestinian clashes at Damascus Gate, Sheikh Jarrah and al-Aqsa presumably created that “right time,” providing Hamas with an opportunity to position itself as the defender of Jerusalem and an alternative to the Palestinian Authority.

The timing was especially fortuitous for Hamas given the cancellation of the Palestinian elections widely expected to hand it a significant victory in PA territory. It is too soon to assess whether the organization’s gamble was successful.

The second failure relates to Israel’s policy vis-à-vis the PA, which has rendered Mahmoud Abbas (Abu Mazen) all but irrelevant, essentially depicting him as a traitor to his people for continuing to cooperate with Israel without any significant quid pro quo. Since prime minister Ehud Olmert tried to reach agreement with Abu Mazen in 2008, successive Israeli governments under Prime Minister Benjamin Netanyahu have sought to marginalize the PA, positioning Hamas as the only faction capable of delivering achievements to the Palestinians. Rather than proving that moderation pays, Israeli policy has continuously weakened the PA and rewarded the militants of Hamas.
The third conception was the assumption that events in Gaza, the West Bank and Israel are unconnected. The Netanyahu government‘s classic divide-and-rule strategy provided it with an excuse to avoid a peace process. Hamas has tried, with a marked degree of success, to link the three focal points. Events have proven that the Palestinian identity, of which Jerusalem is a major component, is the glue that binds all three arenas.

What is more, concern over a third intifada in the West Bank has re-emerged, with many experts warning that conditions are ripe for a popular uprising. The relative calm that preceded this month’s violence resulted in Israeli complacence. The coming days will indicate whether an intifada is at hand. But even if calm is restored, the potential for deterioration will persist, absent progress on the diplomatic front.

The fourth conception to unravel relates to Netanyahu’s policy of forging alliances with Arab states on the periphery – the UAE, Bahrain, Morocco, Sudan and indirectly with Saudi Arabia – while ignoring the Palestinian issue. The agreements he signed with these states allowed Netanyahu to boast that he had disproven the fallacy of a Gordian knot between the Arab world’s normalization with Israel and progress on the Palestinian issue.

The Israeli approach based on striving for normalization with Arab states while circumventing the Palestinian problem allows Israel to continue its creeping annexation of the territories even as it ostensibly suspends formal annexation in return for normalization. However, the persistent attempts to isolate and weaken the Palestinians are a keg of dynamite that could easily explode, even in the relatively “calm” West Bank.

The fifth conception was the notion adopted by the new US administration that there was no urgency in dealing with the Palestinian issue. This thinking stemmed both from the administration’s prioritization of the coronavirus crisis and its aftermath, the desire to deal with other pressing issues, such as Iran, and the refusal of Israelis and Palestinians to engage in negotiations. Even barring a dramatic change in US policy, the prevailing assessment that the conflict can be “managed” rather than resolved will require revision.

The sixth flawed conception, and the one I believe is most important, relates to Jewish-Arab co-existence within Israel. The recent violence in mixed Jewish-Arab cities is an expression of deeply-rooted rifts in Israeli society. The multiple, widely spread flash points that emerged this month cannot be attributed to a handful of radical rioters alone. They reflected something deeper, the outcome of long-festering wounds.

DURING THE coronavirus crisis, attention was focused on the rift between ultra-Orthodox Jews and other Israelis. The results of the March 2021 elections, Netanyahu’s unexpected courting of the Arab vote and negotiations on formation of a coalition government with the unprecedented participation of an Arab political party all suggested that a new era in Jewish-Arab relations was at hand, hence the shock of the Arab-Jewish violence.

The underlying cracks in Israeli society that manifested themselves in this eruption of violence were formed by years of discrimination, exclusion and deprivation of Israel’s Arab citizens and of their towns and villages. What is more, creeping settlement by religious Jews in predominantly Arab neighborhoods contributed to fanning the flames. Many Jewish Israelis are describing the latest clashes as “pogroms,” thereby equating Israel’s Arab citizens with the non-Jews who hounded and persecuted Jews for centuries wherever they lived. The clashes are expected to amplify mutual negative stereotypes and defy efforts to quickly heal the wounds that the sides have inflicted on each other.

The seventh conceived notion to collapse is the feasibility of a broad-based coalition government spanning the political spectrum from Right to Left. The war with Hamas and the ensuing domestic violence have prompted Naftali Bennett to beat a panicked retreat from the evolving “government of change” lest his political base identify him too closely with the Arabs. This unraveling of an alternative government all but guarantees a fifth election or another right-wing government.

One concept that remains intact is the delinking of normalization from the Palestinian issue. The anti-Israel protests and demonstrations in the Arab world, as well as declarations by Arab leaders, have not deviated from the expected line – for now. Many Arab states are keen to see Hamas beaten and humiliated. However, if the war with Gaza drags out, and protests in the West Bank intensify, and certainly if the Jerusalem flashpoints erupt once again, protests will intensify, forcing Arab leaders to take tougher measures.
Israel has for years concerned itself with building a so-called “security wall” to prevent Palestinian terrorist infiltrations from the West Bank. But however high, the wall cannot hide the Palestinian issue nor the rifts within Israeli society. In fact, the latest violence has built, or rather rebuilt, the wall between Israeli Jews and Arabs. Unfortunately, the struggle between Israel and the Palestinians has the makings of classic Greek dramas: Everyone knows how they will end, but no one is willing or able to stop the inevitable outcome. While the result is not pre-ordained, it can almost be guaranteed sooner or later if Israel continues to ignore and suppress the problem. It’s time to wake up. Each one of us has a responsibility to heed this wakeup call.

The troubled relationship between Israel’s Jewish and Arab-Palestinian citizens is the result of long-term neglect and complacency. Whatever government is installed in Israel must realize that the Palestinian issue is here to stay – at home and just across the wall. A government with the participation of Arab parties is more important now than ever because it will prove that co-existence is not just wishful thinking; such a government could strive to root out violence, racism and promote a more equitable sharing of economic resources.
A historic perspective of the Israeli-Arab conflict suggests that progress toward a solution is a dialectical process: One step forward sometimes results in one step back, and vice versa. The 1979 peace agreement with Egypt did not prevent the 1982 war with Lebanon; the 1993-95 Oslo Accords did not prevent the Intifada in 2000; the 2020 peace agreements with Arab states did not head off the latest eruption of Jewish-Arab violence. This does not mean we should despair, but we must avoid complacency and take concrete measures to ameliorate the situation. An optimist, as Winston Churchill so aptly opined, sees the opportunity in every difficulty.

**The article was published on The Jerusalem Post, 29 May 2021
Prev
All Publications
Next