At the Edge of the Precipice: Jewish-Arab Relations in Israel on the Eve of the 2022 Parliamentary Election 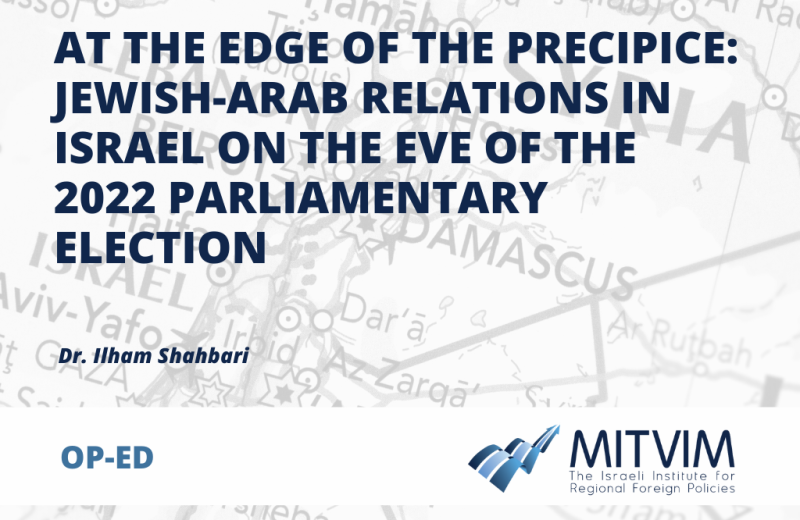 On the eve of the next parliamentary election scheduled for November 1, the Arab public in Israel is undergoing a multidimensional crisis, which is casting a long shadow over its relations with the state and the Jewish majority. At the center of this crisis is the ongoing contrast between the Arab population’s profound despair with the Israeli political game and the possibility that further integration would increase Arab influence and solve fundamental problems within Arab society.

For many Israelis—Jewish and Arab—the last 18 months have been a rollercoaster ride with the lows of unprecedented friction, including the violent events of May 2021, and the highs of unparalleled integration, as modeled by a new political experiment. Ra’am—”The United Arab List” which represents the southern Islamic movement in Israel—became the first Arab political party to ever sit in a ruling coalition in Israel and was thus at the heart of the experiment. This reality gained approval from some parts of the Jewish public and opposition from others.

When anticipating how this past year and a half will impact the Arab population’s political participation in the coming months, it is important to keep three factors in mind. First, while the Ra’am experiment has been successful and Party Chairman Dr. Mansour Abbas has  defied the old taboo by joining the political fray rather than sitting on the fence—as has been typical of Arab politics for decades—his victories are far from astounding. The measures he put in place against crime and violence, along with the budgetary increases he obtained for the Arab society are considered by many to be quite modest.

Secondly, while many favored Abbas’s historic move into politics, some still find it difficult to support Ra’am’s traditionalist and religious flavor. And as a result of the bitter, internecine struggle among Arab political parties resulting in the dismantling of the Joint List in September, there are few attractive alternatives for the Arab public. Indeed, of the political parties that survived the Joint List’s split—namely, Hadash-Ta`al and Balad—none are seen as capable of providing solutions to the Arab population’s troubles.

Finally, no Zionist political party has placed an Arab candidate in any realistic slot on its list—a reality that many Arabs view as a clear sign that Jewish leadership is unwilling to honestly accept Arabs in political society. This aversion comes even after some Arab leaders have made dramatic political moves, including Mansour Abbas’s landmark declaration of his willingness to recognize Israel as a Jewish state. Indeed, several right-wing Jewish figures continue to call for a rejection of cooperation with Arab parties currently in parliament, including Ra’am, along with future restraints on their activities.

Given these factors, there is a growing sense in Arab society that to continue to play in Israel’s political sandbox is pointless, especially when the Arab population’s capacity to make an impact is fundamentally limited. Recent public opinion polls indicate that the voting rate of Arabs in the coming election can be expected to hover around 40 percent or less. This expected participation rate is even lower than the 45 percent who participated in the 2021 parliamentary election, which itself was the lowest rate since the establishment of the state. Consequently, it is reasonable to assume that Arab representation in the Knesset that now accounts for ten of the parliament’s 120 seats—six held by the Joint List and four by Ra’am—will shrink, and that one of the parties—most likely Balad—will fail to cross the electoral threshold.

Arab Society in a Multidimensional Crisis

The emerging political crisis is developing at a time when Arab society in Israel is experiencing a multitude of troubles, manifested most acutely in the younger generation, which suffers from a double estrangement vis-à-vis the state and vis-à-vis political and social authority in Arab society.

About one-third of Arab youth aged 18 to 24 neither work nor study, making them easy prey for recruitment into organized crime or anti-establishment movements, such as the violent events of May 2021. In the last few years, some 40 percent of minors tried in court country-wide have been Arabs, and at 33 percent, they are overrepresented in criminal cases. Some 28 percent of adolescents have admitted to carrying guns on school grounds.

At the same time, however, these younger generations appear to be trying to intensify their integration into Israeli society and the state establishment. Like other members of “Gen Z” throughout the world, Arab youth in Israel feel alienated from politics, tired of ideologies, and eager for personal growth and self-actualization through education, careers, and material achievements. Ample evidence of this growth can be found in Israel’s healthcare system: almost half of all pharmacists and 17 percent of physicians in Israel are now Arabs, up from only 7 percent in 1990.

This ambition in the younger generation is especially reflected among Arab women, whose status in society is rising in a type of silent revolution. The number of women studying at the post-secondary level is rapidly growing, and women now represent almost 66 percent of Arab students at colleges and universities. They are also more involved in the public sector and are entering the general workforce in large numbers. For example, Arab women constitute about one-third of all women working at Haifa’s Technion, a leading global institution comparable to MIT. This is a significant per capita overrepresentation, as Arab citizens only constitute about 17 percent of Israel’s population. In tandem with increased female participation in the workforce, fertility rates are dropping and the age of marriage is rising.  In stark contrast, 58 percent of Arab men have no matriculation certificate, and only 18 percent are university students, compared with 39 percent of Arab women and 48 percent of Jews.

While the young Arab generation despairs of the political system, it simultaneously seeks to assimilate in other areas of society—namely the economy, media, academia, and culture–albeit without blurring its national identity. Indeed, it appears that Arab youth are attempting to frame their identity in a way that will not hinder integration. Over time, this identity has become uniquely hybrid, influenced heavily by context and the geopolitical situation and thus based on four different components: ethnicity (Arab), religion (Muslim for 85% of Arab citizens), citizenship (Israeli), and nationality (Palestinian).

Unlike most of the Jewish population, young Arabs don’t see a conflict between being Israeli citizens and having a sense of national belonging and identification with the Palestinian people. Still, this acceptance is a profoundly challenging effort and it is always difficult to find the golden means by which Arabs can integrate into society and state while maintaining a collective identity, especially when they are so politically limited.

The low rate of Arab participation in Israeli politics is already at odds with the clear willingness of Arabs, or at least Arab youths, to pursue integration. A further reduction of their representation in the Knesset—which now seems to be on the horizon—would make things even worse for both Arabs and Jews. In such a situation, mutual alienation between the communities can only increase, adding to the ongoing tensions that have built since the events of May 2021 in what Jews and Arabs alike refer to as “an unfinished story.”

Growing alienation is liable to strengthen the extremists and separatists on the fringes of Arab society and could even lead over time to violent clashes worse than those of 2021. More specifically, if the coming election ends with a sense that the gate has slammed shut on Arabs, there will inevitably be a profound crisis of expectations within the Arab population and Arab youth in particular, especially since Arabs have more recently had the feeling that their assimilation into Israeli politics and society had improved.

On the eve of Israel’s election, Jews and Arabs must both acknowledge that they are on the foot of a volcano—one that is ready to erupt at any moment and test the nation’s resilience no less than external challenges. Navigating the situation requires mutual understanding and flexibility: the Israeli state and Jewish citizens will have to open the political doors wide, honestly welcoming Arab citizens at all levels, purging manifestations of discrimination, addressing the underlying causes behind youth issues such as  crime, and examining new options for identity expression. For their part, the Arab public and its political leaders will have to accept the state and its current players as citizens with equal rights. They will also have to shelve the persistent demand of a foundational state change from the “Jewish and Democratic State”—Medina Demokratit Ve-Yehudit—set out in the country’s Declaration of Independence to a “state of all its citizens”—Medinat kol Ezracheha—as proposed by the Joint List. Thus far, that struggle has only entrenched the mutual alienation between Arabs and Jews.

For the sake of the future, it is vital for both societies to engage in a deep, long-overdue discourse—the likes of which have been missing since 1948—about the status of Arab citizens in Israel. Such discourse must clearly define Arab citizens’ connection to the state, enumerating their rights and obligations. As it stands, the current state of affairs is unclear and incredibly fragile, and it cannot last. Jews and Arabs must both recognize the historic crossroads at which Israel finds itself. They can either choose a path of descent into past mistakes and dangerous alienation, or they can opt to collectively stride a new route—one which is not free of its own pitfalls, but can still lead to a more stable, mutually beneficial future.

The op-ed was publishes in October 2022 in Washington Institute.

Israeli Arabs
Prev
All Publications
Next