Israel-Lebanon negotiations: cautious optimism but no bells of peace 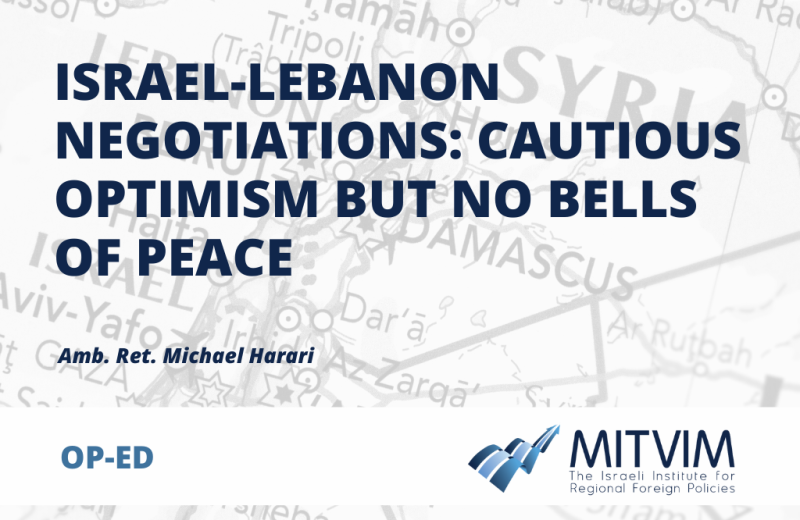 Negotiations on marking the Israel-Lebanon maritime border began on October 14 under unique circumstances, against the backdrop of the unprecedented economic and political crises in Lebanon. US-mediated contacts between the two sides have been under way for several years. A year ago, reports emerged about imminent agreement on the maritime borders, only to be proven unsubstantiated.

Given the deep crisis in Lebanon, which has been unable to establish a new government following the Beirut Port explosion, the relevant players, including Hezbollah, have now realized that talks must be renewed and an intensive effort must be made to reach agreements. This would convey a vital and positive message given Lebanon’s collapsing economy, although clearly it would take quite a few years before Lebanon could reap the benefits of maritime gas reserves in the currently contested area. For now, the coronavirus and its impact on the global energy market have put a dent in gas-exploration investment in the region.

The main obstacle to an Israeli-Lebanese agreement has almost always stemmed from Lebanon’s complex political arena with its multiplicity of domestic and foreign players. However, the Lebanese now understand that resolving the dispute with Israel is vital to tapping the energy potential of their economic waters, allowing international energy companies to proceed with gas-exploration plans, specifically in the area known as Block 9 adjacent to the contested waters.

Given Lebanon’s current severe crises, conditions are ripe to achieve agreement. The September 2020 signing of the Eastern Mediterranean Gas Forum (EMGF) charter likely also made it clear to Lebanon – which is not a forum member – how far behind it is compared to the other states of the region, intensifying its desire to move ahead. Parliament Speaker Nabih Berri, a figure acceptable to all sides, especially Hezbollah, is leading the negotiating process for Lebanon.

The Americans have in the past presented the sides with an informal proposal for resolution of the maritime dispute, which Israel agreed to accept, but to which Lebanon did not respond. According to various reports at the time, the proposal favored the Lebanese side in suggesting that more than 50% of the disputed area be recognized as belonging to Lebanon. The importance of an agreement for Israel, even if it means even greater concessions in the upcoming negotiations, would be to defuse an explosive issue in relations with its northern neighbor. It would convey a positive message to its partners in the Mediterranean Basin, although Lebanon is not expected to join the EMGF immediately even if agreement with Israel is reached.

Despit reports of imminent negotiations, it is too early to pop open the champagne. Negotiations by their very nature are rarely straightforward, even if the current circumstances appear promising. What is more, Lebanon is crippled by its fragmentation and abundant and harmful foreign influences. Nonetheless, the proactive US mediation and involvement of Secretary of State Mike Pompeo are encouraging. The timing of the negotiations, on the eve of US presidential elections, would also be advantageous to the Trump administration, especially if significant progress is achieved in the coming month. Lebanon had consistently demanded UN involvement in the mediation, while Israel only wanted American involvement. The eventual decision to hold the talks at UN headquarters in Naquora, Lebanon, appears satisfactory to both sides.

It is essential to keep in mind at this point that the negotiations relate only to the maritime border, nothing else. Neither side intends to discuss land border disputes or additional issues. Nor are these talks linked to Israel’s recently signed agreements with the United Arab Emirates and Bahrain, and obviously not to an Israel-Lebanon peace accord. Israel would do well to avoid referring to such prospects that would only complicate matters for the Lebanese players and intensify domestic and external pressures to avoid agreement with the “Zionist entity.”

These developments are not directly related to the growing tensions in the eastern Mediterranean. Lebanon and Israel have always wanted to resolve the maritime border issue. Nonetheless, progress on the Israel-Lebanon front would likely have a positive effect on the climate in the region and could help efforts to ease Greek-Turkish tensions. Turkey is presumably closely monitoring these “winds of reconciliation,” given its growing involvement in Lebanon in recent years, and examining the possible implications for its interests.

Thus, while discussion of peace is not on the agenda, a successful conclusion of the Israel-Lebanon negotiations is important. To that end, Israel would be wise to focus on professional energy discussions with Lebanon, in which agreement seems feasible, and avoid imbuing the talks with broader diplomatic dimensions as some political elements might be interested in doing.

The op-ed was published in October 2022 in JPost.

Israel-Lebanon
Prev
All Publications
Next