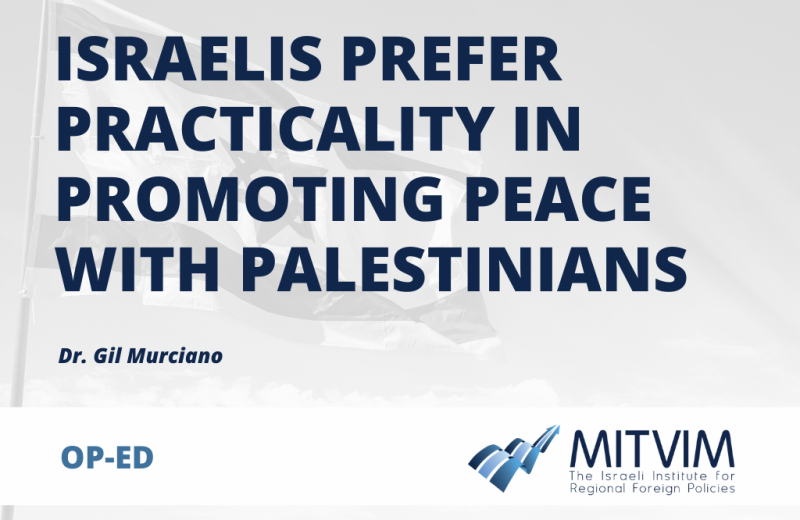 The Mitvim Institute’s 2022 Foreign Policy Index, published in October for the tenth straight year in collaboration with the Friedrich Ebert Foundation, indicates that the Israeli public has reservations about comprehensive solutions to resolve the conflict with the Palestinians or even to reach a long-term arrangement in the Gaza Strip. While Israelis find it difficult to view the two-state solution as a tangible long-term strategy for peace, they are widely supportive of practical steps for building a two-state reality.

These practical steps include a unique set of tangible policies that have far-reaching significance for the gradual advancement of the two-state vision. In fact, support for these practical measures spans the political spectrum from the left to the center-right.

What did Mitvim’s survey show?

When Mitvim asked what policy the next Israeli government should implement vis-a-vis the Palestinians, only 36% supported actively promoting the two-state solution, compared to 39% who supported the status quo or refrained from expressing an opinion on the issue. Even on more specific issues, such as a long-term strategy vis-a-vis the Gaza Strip, the public is almost equally divided between the options of economic development, efforts to restore control of the Gaza Strip, and negotiations for a long-term arrangement with Hamas. A majority of respondents prefer the current stick-and-carrots policy vis-a-vis Hamas, at least as long as it yields effective results.

Some will say that the lack of decisiveness and commitment regarding long-term solutions to the Israeli-Palestinian conflict reflects an ideological shift within the public to the Right. But an in-depth examination of the public’s positions on policy measures toward the Palestinians presents a far more complex and nuanced picture. For example, more than 60% of those surveyed, including an overwhelming majority of Center-Right voters, support the establishment of a joint mechanism for Israel, the Palestinians, and Jordan to prevent escalation at the holy sites in Jerusalem.

Such a mechanism, if established, would have a direct impact on Israeli sovereignty in the Holy Basin, which was one of the core standing issues in the negotiations between Israel and the Palestinians regarding a two-state solution. Even if we assume that some of the supporters are not aware of or would not openly admit the full significance of this step, in practicality, a significant proportion of the public is willing to promote such a step in order to prevent escalation.

A similar willingness to accept measures that promote the two-state logic is also evident in the field of energy and the climate crisis. Mitvim’s survey reveals that more than half of Israelis (54%, including a majority of Center-Right voters) support Israeli aid for the development of independent energy and water infrastructure in the West Bank, which is a key tool for developing sovereign state capacities in the West Bank. Palestinian energy independence would have a significant impact, not only on the Palestinian quality of life but also on the power balance between Israel and the Palestinians.

How can we explain the public’s split personality regarding a political solution with the Palestinians, with skepticism and opposition to long-term solutions on one hand and support for practical steps conducive to a political solution on the other? One explanation could stem from the fact that practical steps do not require Israelis to develop broad trust in a Palestinian partner but only to address defined issues.

Another explanation relates to the growing awareness of the current political costs and structural obstacles of returning to negotiations, including the absence of political leadership in Israel willing to deal with such a hot-button issue, the crisis of legitimacy in the Palestinian Authority and the ongoing political split between the West Bank and Gaza.

At the same time, it can be argued that public awareness of the explosive nature of the Palestinian issue and the danger of it leaking into Israeli territory has increased since Operation Guardian of the Walls (May 2021), and even more so in recent months, with increasing security friction and erosion of Palestinian Authority control in the northern West Bank.

Israelis view Gaza and Jerusalem as possible focal points of escalation. They also support the need to prevent escalation and create positive dynamics on the ground, even at the cost of helping to build the infrastructure of a future Palestinian state.

Looking to the upcoming elections on November 1, the public’s distinction between skepticism over a solution to the conflict and support for practical measures is of political significance. An analysis of the findings shows that support for practical measures is a watershed between rooted right voters and the rest of the Israeli electorate. These measures enjoy clear support among Center-Right, Center, and left-wing voters, while those who describe themselves as right-wing voters reject them.

Practical measures of political significance enjoy broad support in exactly the same center field that can serve as a political game changer. They are supported by a large portion of the likely undecided or swing voters still weighing whether to vote for Likud or for the centrist parties.

Prime Minister Yair Lapid’s statement at the United Nations General Assembly on Israel’s commitment to a two-state solution is especially significant in light of these trends. Lapid has set a broad vision and public opinion suggests a way to implement it.

The establishment of a joint Israeli-Palestinian-regional mechanism to prevent escalation in Jerusalem and the promotion of energy independence in the West Bank are a good start. Additional practical measures with political implications, such as providing building permits and approving zoning plans for Palestinians in Area C and the Jerusalem area offer an additional direction.

The survey also indicates strong public support for leveraging the Abraham Accords to promote peace with the Palestinians. For the second year, more than half of those surveyed (57%) support utilizing the ties with the normalization countries to promote Israeli-Palestinian peace. Peace, not increasing cooperation, not shrinking the conflict and not reducing tensions but peace. The fundamental question, of course, is how to connect these seemingly unrelated processes.

Increasing the involvement of normalization countries in the peace process through various means, such as creating a special subcommittee within the framework of the Negev Summit to discuss Israeli-Palestinian peace or the integration of normalization countries in long-term economic development projects in the Gaza Strip and the West Bank, can serve as a practical basis for peacemaking.

It is important, at this point, to separate practical steps aimed at creating political momentum for peace from tactical measures of conflict reduction (for example, increasing the number of permits for Palestinians to work in Israel). The latter, important as they are to Palestinian daily life, are mostly intended to merely manage the conflict and neutralize tensions to avoid dealing with the broader political issues.

However, in light of the recent escalations in the West Bank, defense officials have made clear that Israel has exhausted its arsenal of tension-reducing, tactical measures and that without progress in the political sphere further escalation is only a matter of when not if.

Practical steps that have a political impact, whether at the regional level, concerning energy, Jerusalem, Area C or Gaza should become components of a new peacemaking approach. This is an approach that seeks to develop what my colleague, Dr. Roee Kibrik, defined as a creeping peace, a gradual process of changes on the ground that accumulates into the creation of political momentum from below. It is evident that the Israeli public is already there. Away from historical speeches and handshakes on the White House lawn, significant portions of the Israeli public are willing to make the most of the here and now to promote peace.

The op-ed was published in October 2022 in JPost.