The Israel-Lebanon maritime deal is an example of successful US-led mediation. Can it be copy-pasted to other Middle Eastern arenas? 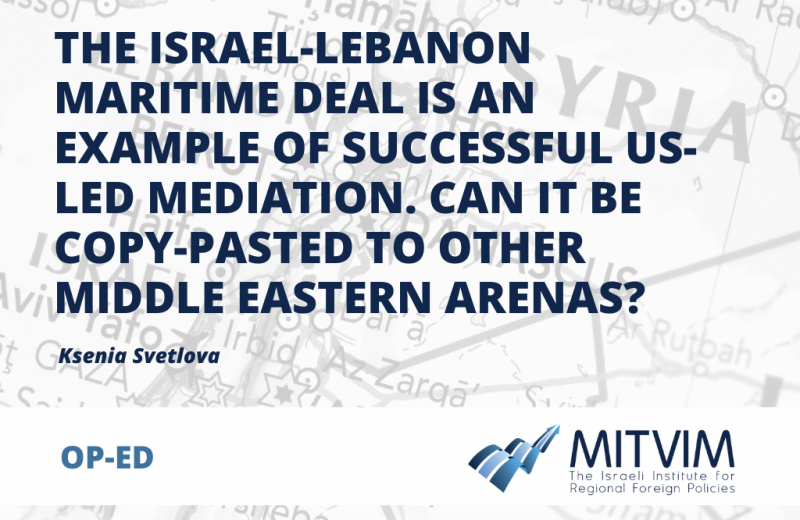 After a decade of tough negotiations, frustrations, and impasses, American mediators succeeded in a difficult task. On October 26, they convinced Israel and Lebanon the importance and need for a maritime agreement, overcoming many political landmines in the process, and timed just as Lebanese President Michel Aoun departed from the Baabda presidential palace.

Although the current agreement does not herald an immediate rescue and salvation for Lebanon in the short term—given that developing the Qana field, erecting the infrastructure, and drilling and producing the gas is a long-term process—it remains a clear win for the country, having diminished the threat of war hanging in the air for several months. In the event of an actual outbreak of war, it is unlikely that Lebanon would have survived, given the ongoing economic crisis, shaky security situation, and political impasse. This fact, most probably, was also acknowledged by Lebanese militant group Hezbollah, which neither wants nor is capable of replacing the little that remained of the Lebanese state and being blamed for another devastating war.

The maritime border agreement instils some stability in the Lebanese system, removes the prospect of war (at least for the short term), and introduces the ability to profit from gas sales, thus, providing a light at the end of a very dark tunnel for the country. Similarly, Israel, which experiences chronic political instability and watches with concern the wave of violence developing in the West Bank and the weakening of the Palestinian Authority (PA), will be spared from worrying about an immediate escalation at the northern frontier.

Although the agreement with Lebanon does not guarantee long-term stability and does not necessarily reduce the chance of a war between Israel and Hezbollah in the future, Israel can now develop the Karish gas field without the threat of an attack by Lebanese drones and, instead, can focus on stabilizing the situation in the West Bank. The deal is unlikely to be canceled, despite the promises of the head of the opposition Benjamin Netanyahu, due to both the substantial security dangers and the fear of fatally damaging relations with the US.

If things go as planned, Lebanese gas flowing to Europe will decrease the continent’s dependence on Russian gas. Furthermore, America’s successfully-brokered deal will translate into more regional confidence in the US’s role and influence in the region.

After President Joe Biden’s visit to the region in July, the Palestinians and their supporters in the US claimed the administration was slow in promoting a peace agreement between the sides.  Understandably, the Palestinian side is waiting for more determined steps from the American administration. Yet, at present, while Israel is heading once again into elections and the PA is critically weak, political negotiations and a political agreement are no more possible than a peace agreement between Israel and Lebanon. But perhaps while a grand deal is not possible, smaller-scale stabilizing agreements in security and the economy can still be achieved.

Agreements of this type require no less effort and dedication than peace agreements. The US succeeded despite the many obstacles and dead ends due to its negotiation skills, patience, and ability to connect this deal to other agreements, such as the gas agreement with Egypt, which will allow the flow of gas from Egypt to Lebanon via Syria (despite the sanctions on the Bashar al-Assad regime).

The maritime borders between Lebanon and Israel may also give impetus to other positive developments, such as the thawing of the development of the Gaza Marine gas field off the coast of the Gaza Strip. Egypt has already announced its willingness to act towards the achievement of this goal, and it is very appropriate that the US be involved in the entire process to give it additional heft.

The Israel-Lebanon maritime agreement sends an important message to the region: even in impossible situations, complete stagnation on the political level, and a rising military threat, dedicated and focused mediation can bring about desired results. On October 27, the day the agreement was signed, Prime Minister Yair Lapid described it as “historic.” Without sounding too dramatic, there is some truth in this.

It is possible that, in the chaotic reality of a volatile Middle East, where multiple actors with contradicting agendas shape politics, this problem-solving model might prove to be the most approachable and realistic—at least for the time being. Therefore, it is even more important that the Israeli-Lebanese deal be crowned a success and not become another broken promise that will be exploited by each side to harden positions next time.

The hard work must go on

Despite the obvious sense of relief among all those who supported the agreement in Israel, the US, and Lebanon—Elias Bou Saab, a deputy parliament speaker, was rewarded with a medal by  President Aoun for his efforts in achieving the deal—there is no doubt that the success of the agreement will be measured solely by its performance in the future. If the wave of violence in the West Bank continues and expands, it may cause the Palestinian organizations working closely with Hezbollah to join the infighting with Israel. Although the maritime border agreement does not prevent new conflict between the parties or the manifestations of violence, its credibility and the success of other agreements will be severely damaged, as well as the ability to implement its terms and start gas drilling in the Kana field.

In the future, if gas is indeed discovered and the profits begin to flow to Israel, the US will have to establish a careful and meticulous mechanism to ensure that the money does not reach Hezbollah or Iran. American mediation and monitoring should continue even after the signing of the agreement. This is important for the two signatory parties and the US, since failure of the maritime agreement might also harm its credibility and influence in the region.

The foot must definitely not be taken off the gas pedal: it’s time to prepare for spoilers and to consider implementing this experience in other parts of the Middle East.

The op-ed was published in October 2022 in the Atlantic Council.