The Paradox of Netanyahu 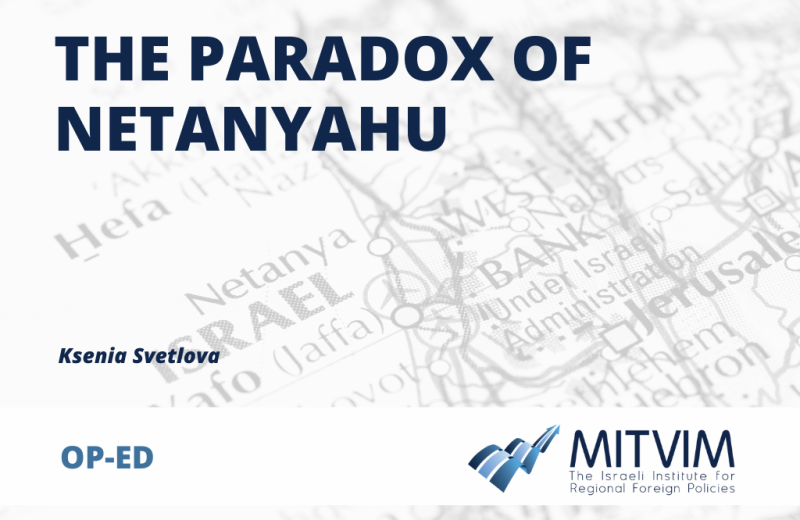 Israel is once again going to the election polls on November 1, for the fifth time in less than four years with only one real issue on the agenda: “Bibi or not Bibi.”

Who is this man and why did he, from among all Israeli politicians, define and shape Israel for the past generation? Today, at the age of 72, after countless embarrassing political combinations, broken promises to his supporters, three criminal cases, quarrels with US Presidents Clinton and Obama, and a flirtation with Russia’s Vladimir Putin, Netanyahu is considered the most seasoned and charismatic politician. He enjoys the highest percentage of support in the Israeli public of any candidate, when asked who is the most qualified for the position of prime minister. One can feel various emotions toward Netanyahu, but it’s hardly possible to ignore him. Even when his competitors talk about themselves and their ideology and goals, they often end up talking about Netanyahu.

Not only in Israel but also abroad, attitudes toward Netanyahu are polarizing—you either love him or hate him. His supporters believe that he is irreplaceable in somewhat messianic terms. In practice, they credit him and his policies for the country’s dramatic economic growth during his years in office since 2009. They respect his ability to avoid dangerous concessions and yet achieve a breakthrough with several Arab countries in the Abraham Accords. Meanwhile, his opponents warn of the great danger inherent in his ambitions (and his efforts to shed off his legal problems) and do not shy away from using the harshest terms in describing him as not trustworthy, sneaky, cheap, and egoistical. They hint heavily that he has come under the influence or control of his wife and son.

Thus, in public, he is either greeted with chants of “Bibi—King of Israel” or with bitter “Don’t come back” banners placed on the roadsides. Some of his own supporters may occasionally promise themselves to wean the Likud off its dependence on Bibi. And yet, despite the curses and disappointments, his support base crowns him time and again as their absolute leader. His grip on his party is as firm as ever.

The Leader of the Jews

Netanyahu leads the second generation of right-wing politicians since the founding of the state in 1948 (Ze’ev Jabotinsky led the right in the pre-state era). The first-generation leaders were Prime Menachem Begin and Yitzhak Shamir, both of whom were active in pre-state underground organizations who fought the British. They were known to live modest lifestyles and adhere to conservatism in politics and personal life.

Netanyahu, who became the head of the opposition for the first time in 1992, was their antithesis. He grew up in the United States, after his father—Benzion Netanyahu, an historian of Jewish life in Europe—left the country, unable to advance his academic career due to his revisionist views. Benjamin Netanyahu or Ben Nitay, as he called himself during his years in the US, served—alongside his two brothers—in the prestigious General Staff Reconnaissance Unit (Sayeret Matkal), but the aura of heroism and sacrifice that he gained stemmed from being the brother of Yonatan Netanyahu who fell while commanding the Entebbe rescue operation in 1976.

Netanyahu loved the US and built a life there, focusing on a career in business and with an MBA from MIT (making him the Israeli prime minister with the highest level of formal education). He also got involved with the Institute for the Study of Terrorism named after his brother and thus got to know senior Israelis and developed close ties with them. The transition to a new career as an Israeli diplomat was sharp and quick. In 1984, paradoxically, it was Prime Minister Shimon Peres who appointed Netanyahu to serve as Israel’s ambassador to the United Nations, to the dismay of the Likud leader, Yitzhak Shamir, who called Netanyahu an “angel of destruction.” This nickname stuck with Netanyahu, and many of his political enemies still use it today when they come to imply that in politics, Netanyahu ruins everything that he touches.

The Likud’s young generation of “princes” (sons of the party founders) were also not enthusiastic about Netanyahu either—he was too American, he relied on American advisers, and according to many of them (none of whom is currently in the Likud’s Knesset list), his style was more suited to the US. It turns out that the American style and advisers were exactly what the Israeli right needed.

The millionaire from Caesarea, the owner of luxury real estate who went to one of best US schools and endorsed a firmly entrenched free market philosophy, became the idol of the people living in the small towns of Israel’s periphery who suffered from discrimination and the lack of good work opportunities. They had been the key voting force behind the right-wing revolution in 1977 that brought the Likud to power. The man whose way of life is distinctly secular had whispered in a conversation with an influential religious mystic (Rav Kaduri) the iconic phrase—“They [the Left] forgot what it is to be Jewish” and implied that Israelis who believe in the partition of the land are not Jews at all. Later, in the aggressive campaign he would lead against civil society organizations, much of the media, and the left-wing parties in 2015, he would define their activities as “anti-Jewish.”

Bibi’s articulation of “Jews against a hostile world”—which gained credence among many in Israel after the horrifying violence of the Second Intifada in the years 2000–2005, destroying the political base of the left-wing parties—helped him shape Israel during his years in power. He had friends among fellow conservative leaders in the West—Stephen Harper in Canada, Mark Rutte in the Netherlands, and others—but he retained his belief that even the US, Israel’s greatest friend, is capable of abandoning the Jews to their fate, hence his willingness to openly challenge President Obama over the Iran nuclear deal. When he developed close ties with Russia’s president, Vladimir Putin, despite the American sanctions against Russia following the annexation of Crimea in 2014, he justified it as “good for the Jews.” Russia controlled (and still controls) the airspace over Syria, which Israel uses to attack Iranian forces planning attacks against Israel. His ties with figures on the European extreme right, such as Victor Orban in Hungary, gave leverage to the pro-Israel elements in Europe and weakened the critics of Israel: again, in his eyes, it was good for the Jews, even when many Jews in Europe and the US begged to disagree.

Netanyahu’s growing attention to foreign policy in his later years in office led to a personal brand of diplomacy (while chopping away at the functions of the Israel Ministry of Foreign Affairs, which he saw as rife with critics of his policies). He built a new relationship with Greece (even when it was led by the left) and Cyprus. He struck a significant personal bond with Prime Ministers Narendra Modi of India and the late Shinzo Abe of Japan and renewed Israel’s involvement in African affairs. His crowning achievement in foreign affairs was the promulgation of the Abraham Accords. This new diplomatic momentum further enhanced his sense that his personal presence at the helm has become vital for the national interest.

As time went by, indeed, it seemed that what was “good for Netanyahu” became (in his and his family’s eyes) a central part of what is “good for the Jews.” A talented and gifted man, well-read and broad-minded, he began to identify himself more and more with Israel. In 2017 he claimed that his investigations were driven by the “left” in an attempt to launch a “judicial coup” against the will of the voters and despite the impressive state of Israel’s foreign relations and economic success. According to Netanyahu, his opponents as well as Israelis who chose to protest against him were probably on the “payroll of the New Israel Fund,” and every critic, even one with the most impressive military record, became a “stooge of the Arabs, Iran and the left.”

Soon the media that accused him of corruption, and the justice system that wanted to investigate and then pressed charges, became personal arch-enemies, and even the subversive enemies of his state.

Gradually, his sense of being persecuted intensified, as Mazal Mualem, an Israeli journalist wrote in her book Cracking the Netanyahu Code. So did his desire to restructure and adapt the media, the judiciary, and the political systems to his needs. Many biographers of Netanyahu believe that the turning point came in 2016, when he appointed himself minister of communications, maintained close ties to the key media moguls, and, according to their testimonies, personally interfered when negative items were published about him, his wife, or his son. As the judicial system kept investigating his dealings with his billionaire friends, whose gifts seemed to cross the thin line into graft, every person involved in the proceedings—the general commissioner of the Police, the attorney general, the state prosecutor, and the judges—all became targets of campaigns of incitement led from the prime minister’s residence on Balfour Street. Could it be that Netanyahu, who used to be an energetic and dynamic minister of finance, now avoided promoting necessary but difficult reforms and refrained from significant changes in the political, economic or social spheres, because he was too busy with political survival and wars with the media and the justice system? It might be just another one of Netanyahu’s paradoxes. Another one is his attitude toward Israel’s Arab minority—which he warned against during political campaigns while taking pride in having initiated a massive program of public sector investment in Israeli Arab towns and neighborhoods.

Today, his base is united behind him. But many other Israelis are flying banners against him from the bridges and overpasses. They fear that in another twist of the endless elections saga and in an attempt to escape a criminal verdict that might end his otherwise spectacular political career, Netanyahu will continue his brutal war against the media and the judiciary, form a government with the most extreme and xenophobic elements in the far right, and carry forward Israel’s “Orbanization” process following the Hungarian model. At the same time, the other part of the Israeli polarized public apparently believes that Israel could collapse if Netanyahu does not return to power, and that the Lapid–Ganz government, that lasted for just one year, was the least competent in the history of Israel.

Many in Israel attribute the country’s ongoing political polarization to this man who has ruled the government for nearly 15 years, already longer than the founding father, David Ben-Gurion. Others will conclude that this attribution is an attempt by Netanyahu’s opponents to suppress popular support for him, out of their elitist disdain toward his voters. All other issues—the worsening security situation in the West Bank, the gas deal with Lebanon, the high cost of living, the war in Ukraine—are currently woven into this lasting political moment of Benjamin Netanyahu and his ability to shape Israel’s discourse and its politics. For now it seems that Netanyahu is not going anywhere, even if he will lose (again) the ability to build a rightwing majority after elections. And even if at some point he will be removed from the Likud leadership, his influence will continue for many years to come.

The op-ed was published in November 2022 in Jerusalem Strategic Tribune.

Israel
Prev
All Publications
Next