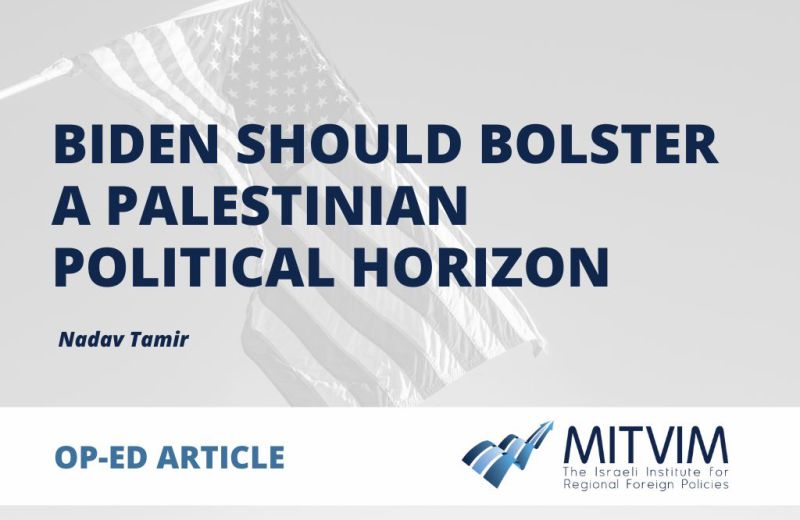 When US President Joe Biden visits Israel and the PA in mid-July, he will meet a caretaker Israeli prime minister and a Palestinian leader who has lost his legitimacy. This is clearly far from optimal timing for any significant move on the Palestinian issue but it could present a great opportunity to create a political horizon for the next time Israelis and Palestinians go to the polls.

Since its inauguration, the Biden administration avoided prioritizing the Middle East on its full agenda for several understandable reasons. The US no longer needed the Arabian/Persian Gulf energy reserves, having itself become an energy exporter and aspiring to curb the use of polluting energy.

The administration was also mindful of the disappointing results of US military interventions in the Middle East in recent decades – the war in Iraq that strengthened the Iranians and ISIS, the policy of “leading from behind” in Libya that failed, as did the huge investment in Afghanistan and in attempts to turn it into a democracy, which ended in a justified albeit ignominious American withdrawal.

On the Iranian issue, the administration was determined, rightly so, to return to the Joint Comprehensive Plan of Action in order to stop Iran’s progress toward military-level uranium enrichment for its nuclear program, which accelerated significantly since Trump violated the agreement. However, the Iranians have upped the ante and negotiations between the sides are deadlocked.

Biden also realized the futility of advancing the two-state solution, in which he believes, when Israel’s government is unable to move forward on the Palestinian issue while the Palestinian Authority’s leadership has lost internal and external legitimacy. Due to the low priority given to Middle East issues, it took the administration a long time to appoint an ambassador to Israel, and the assistant secretary of state for Near East affairs only assumed office on May 31 after the Senate finally confirmed her appointment.

Two factors have restored the Middle East to the administration’s priorities, leading to Biden’s planned visit next month to Israel, the Palestinian Authority and Saudi Arabia. One is the war in Ukraine, which has once again raised the need for the Middle East’s energy resources in order to provide an alternative to sanctioned Russian gas for Europe and ease the oil price hikes impacting inflation and exacerbating the US economic downturn born of the COVID-19 pandemic. The war in Ukraine has been a salve for the domestically weakened leader unable to push reforms through Congress, presenting Biden as an international figure successfully leading NATO to unity and weakening Russia.

The second factor prompting the visit is the midterm elections for the House of Representatives and a third of the seats in the Senate. The Democrats are projected to lose their slim majority in both houses and a presidential visit to Israel never hurts, as politicians have found through the decades, although the government Biden meets here will be a transitional one.

His visit to Israel is supposed to “legitimize” his scheduled meeting with Saudi Crown Prince Mohammed bin Salman (MBS), ostracized by Democrats for his alleged role in ordering the assassination of dissident Saudi journalist Jamal Khashoggi and for his country’s troubling human rights record. Administration officials are justifying the visit and meeting with MBS by citing its importance to Israel’s security and to bolstering the regional front against Iran.

The mistake of neglecting the Palestinian issue

THE AMERICAN and Israeli Right are satisfied with the Biden Administration for mobilizing to strengthen the Abraham Accords, thereby reaffirming their belief that Israel can normalize relations in the region even without a breakthrough in the Palestinian context. They are completely wrong.

Biden, who indeed has Israel’s best interests at heart, is also wrong because neglecting the Palestinian issue is much more dangerous for Israel than the military threats that our politicians and media love to highlight. Israel is a military power able to deal with all external threats, including the Iranian threat (according to uncensored foreign experts). However, its military might does not provide the State of Israel with any response to the grave threat posed by the continued status quo with the Palestinians to its identity, morality and the future of Zionism.

The return of the Middle East to the US administration’s list of priorities provides a challenging opportunity to create a political horizon and thereby avert the inevitable catastrophic outcome of the status quo – a binational state, or a country in which Jews are minority in an Arab state, or worse, in which a Jewish minority controls an Arab majority by undemocratic means.

American pressure on Israel to avoid thwarting the prospects of a two-state solution by building in the settlements, especially in strategic locations such as E1 or Givat Hamatos, is important but insufficient. Most Israelis prefer the two-state solution but do not believe it can be achieved.

If Biden wants to help Israel and also hand Saudi Arabia an achievement in exchange for lower oil prices, he must announce acceptance of the parameters of the Arab Peace Initiative, launched by the Saudis in 2002 and reaffirmed since numerous times by all Arab leaders, including the Palestinian, Egyptian and Jordanian ones.

The original initiative was enhanced at an Arab League foreign ministers’ summit under pressure from then-Secretary of State John Kerry by including the principle of land swaps, which could leave the vast majority of settlers in their homes and also waives the full realization of the “right of return” by Palestinians to what is now the Jewish state. American recognition of these parameters as the basis for negotiations could jumpstart an initiative to advance the existing international consensus on a future arrangement.

There is widespread international agreement that such an arrangement should comprise the 1967 borders with land swaps, a Palestinian capital in east Jerusalem (enabling the establishment of an American embassy there without having to obtain Israeli permission to resume the operation of a consulate), and a just and agreed-upon resolution of the refugee problem (meaning giving Israel veto power over the number of refugees who would return).

Such a political horizon could bolster support in Israel for the two-state solution and pave the way for turning it into a political reality, thus securing Israel’s future and fulfilling the Zionist vision. A political horizon would also advance a regional front against Iran, but should be viewed as an essential goal in itself because it addresses the threat to our identity that is much more dangerous than Iran.

Israel-Palestine / Israel-USA
Prev
All Publications
Next