There’s uncertainty in Israel and within the Palestinian Authority. The US’s stabilizing role is critical more than ever. 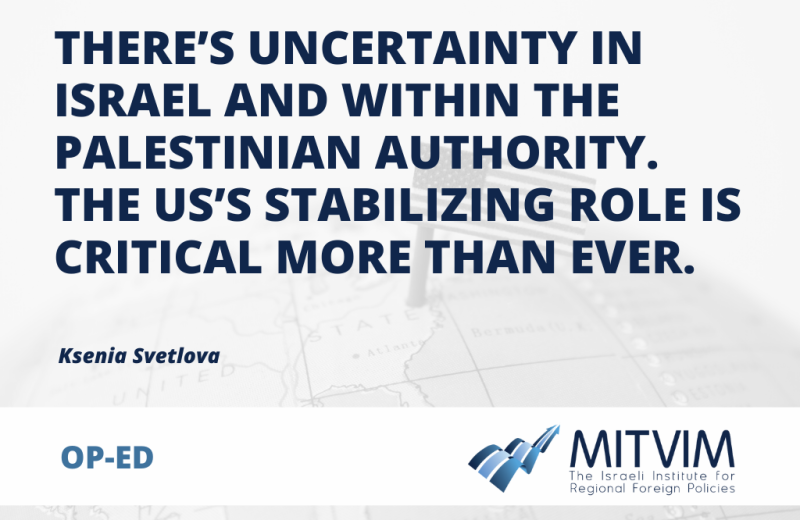 Just months ago, it seemed that the Joe Biden administration’s global priorities were all set—from strategic competition with China to addressing Putin’s emboldened Russia. However, the Middle East, with its many “forever conflicts,” didn’t make the cut to the top of the to-do list. Now, amid the war in Ukraine and a looming global food and energy crisis, US President Biden has been forced to reengage with the region and even lean on some political actors, who up until now, weren’t even eligible for a face-to-face meeting.

The scorching summer of 2022 probably isn’t the best time to tour the region. A popular Israeli joke has it that there are only two seasons in the Middle East: the hot sandy winds and elections—and now both are occurring together. All three of Biden’s stops in his regional tour are currently experiencing some degree of turmoil: Israel’s government just fell; the Palestinian Authority (PA) faces the heavy atmosphere of an impending leadership transition; and Saudi Arabia is reinventing itself and reshaping its foreign policy, while preparing for the inevitable transition of power from ailing King Salman to his energetic son, Crown Prince Mohammed bin Salman.

The current regional turbulence might seem to be an inhospitable backdrop for a US presidential visit. However, the importance of the United States asserting its regional leadership role and driving its strategic interests cannot be underestimated. During periods of regional and global instability, it is critical that the US indicate to its regional allies that they matter and their needs are being taken into consideration. Transitions might be messy, but they also present an opportunity to start afresh and to reboot lagging ties or to develop new relationships.

Israelis and Palestinians know well that, while they will be getting their share of attention, the most important and perhaps most difficult part of Biden’s Middle East tour will take place in Saudi Arabia. The Kingdom is important, not only because of its ability to provide some stability to global oil markets, but also due to its rising regional influence. In the aftermath of the 2011 Arab Spring, Saudi Arabia, along with the United Arab Emirates, not only survived the turmoil, but also emerged as one of the Middle East’s leading countries. Saudi Arabia’s divorce from radical Wahhabi ideology, support for the 2020 Abraham Accords, and buttressing of moderate Arab regimes in the region are all extremely important.

The rise in Saudi Arabia’s regional influence coincided with sharp ups and downs in its relations with the United States. Saudi Arabia provides Egypt with financial aid that helps Cairo stay afloat, but, at the same time, it is unable to protect its oil installations and airports from foreign aggression. Emboldened Saudi enemies, such as Iran and their Houthi proxies in Yemen, triggered a chain reaction in Riyadh. When the Saudis felt that they didn’t get sufficient reassurances from Washington, they began looking at diversifying their foreign relations and weapons purchases, with particular focus on Moscow and Beijing.

Israelis share the same fear of US disengagement from the region as the Saudis. This sentiment—concerns of further security destabilization in the Middle East while the Americans pull out from Syria, Iraq, and Afghanistan—also shapes Jerusalem’s current policy on Russia, including its efforts to seek a middle ground on the war in Ukraine.

In addition to the Saudis, the Palestinians have been suffering from extreme ups and downs in their relations with the White House over the years. This began with the deep involvement in peace talks between Ramallah and Jerusalem during the Barack Obama administration—only for an unofficial boycott during the Donald Trump era. Now, under the Biden administration, there appears to be an atmosphere of indifference and stalemate. The guideposts in Palestinian relations with Washington were lost, with the constant reference point having disappeared.

The situations in Israel and the Palestinian Authority are, of course, very different. Despite all its fears and insecurities, Jerusalem is a staunch US ally. At the same time, Ramallah openly wishes for a different broker that is less sympathetic to Israel. In November, Israel will go through its fifth election in three years after the Naftali Bennett-Yair Lapid government collapsed on June 20. Meanwhile, Palestinians yearn for elections that haven’t happened since 2006, when Hamas won a legislative majority in an upset victory against Mahmoud Abbas’s Fatah party. Even so, the current endgame is similar, as both sides go through an undefined period of political instability and a power vacuum that prevents any possibility of serious dialogue or negotiations.

Precisely due to this precarious situation, the United States needs to reaffirm its commitment to the two-state solution, as there is no other proposed alternative. This commitment should be reinforced not only by statements—although they are, of course, important—but by concrete positive steps designed to stabilize the situation and inspire hope. Some of these steps involve fulfilling earlier promises to the Palestinians regarding reestablishing a US consulate in Jerusalem, which closed in 2019. Others require conveying a clear message to Israel that mass evictions of Palestinians from their homes or home demolitions are counterproductive, dangerous, and generally unacceptable.

While it’s clear that the path to the negotiation table is currently blocked due to the unstable political situation in Ramallah and Jerusalem, much more can be done to prevent the collapse of the PA and what is left of the Oslo Accords through regional initiatives. After initial hesitancy about how to respond to the Abraham Accords, the Biden administration has rightly embraced them as the only ray of light in an otherwise troubled region. Biden himself said there are “much larger issues than just energy” motivating his upcoming trip on July 16 and indicated that he is going to Saudi Arabia to discuss normalization efforts, as well as regional security challenges.

There is no doubt that, today, the most pressing regional concern to US allies—Israel and Saudi Arabia—is Iran and the possibility that it might soon become a nuclear threshold country. Yet, despite being sidelined for the last decade, the Israeli-Palestinian conflict hasn’t faded into thin air. It remains a major strategic challenge to Israel’s national security and regional stability. Both the previous inflation of its centrality and the current underestimation of its graveness is dangerous to Israel and the Palestinians, as well as for their closest neighbors, Jordan and Egypt. The United States and its Middle Eastern allies cannot allow inertia to dictate the course of events, as the outcome it will produce might be too grave. To influence the course of events and prevent escalation, the United States must act as a stabilizing force, presenting its regional approach and involvement with clarity and consistency.

When China and Russia are keen to deepen their influence in the Middle East and American allies in the region are doubtful about the future, it is up to the United States to connect the dots and provide the stability and firmness that is lacking in today’s regional landscape. Biden’s visit to the Middle East must not be an isolated event, a band-aid for other people’s problems. Instead, it should powerfully relaunch relations between the United States and its long-term allies and partners in the Middle East. If stability cannot be derived from the inside, it might be injected from the outside.

United States
Prev
All Publications
Next