Democracy and Foreign Affairs in Israel 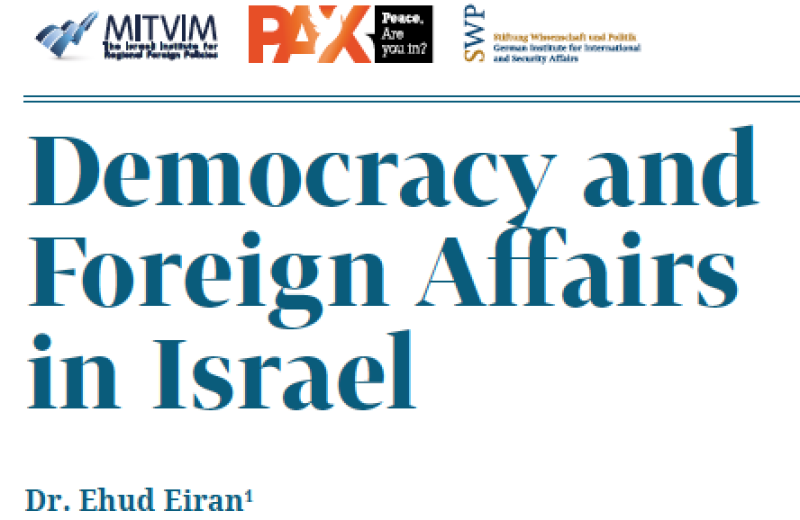 Mitvim is proud to have partnered with PAX for Peace Netherlands and SWP Germany on an extensive research project, “Democratic Backsliding and Securitization: Challenges for Israel, the EU and Israel-Europe Relations”. Three short policy papers were developed as part of this project. This is the first, written by Dr. Ehud Eiran, which explores the relationship between Israel’s democracy and its foreign policy. It analyzes the state of Israel’s democracy and foreign relations, the role of Israel’s internal democratic makeup on its foreign policy, and the effect of the interaction with democratic states on Israel’s democracy.

Dr. Ehud Eiran is a Senior Lecturer at the University of Haifa, and a Board member of Mitvim.

The state of Israel’s democracy
The state of Israel (excluding the occupied West Bank) is a democracy. Leaders are replaced in the polls; the judiciary is independent and there is protection of civil rights. Israel is defined as free with a grade of 76/100 in the 2020 Freedom House index; it received a 33/40 in political rights, and 43/60 in civil liberties. This places it above most states in the international community, and at the medium to low end of the OECD.  At the same time, Israel has ruled the West Bank under “temporary” military control since 1967. Currently, there is no indication that it is moving towards relinquishing control over the region or awarding the local population full citizenship. Many Israelis see this challenge as external to Israel’s body politic, and therefore not a democratic deficit. Others, in Israel and outside of it, argue that since the same government exercises its authority both in Israel and in the West Bank (albeit shared, to an extent, in the West Bank with the Palestinian Authority), the whole region should be analyzed as a single political unit. Seen from this perspective, Israel is no longer a democracy.

The state of Israel’s foreign affairs

Against the background of a challenged democracy, Israel’s stature in the world is probably at its zenith. After decades in which Israel was shunned by a large number of states, by 2021, it had diplomatic relations with 164 states, and is represented abroad by 108 embassies and missions. Israel is also well integrated into the global economy. As of 2018, exports and imports accounted for some 60% of its GDP. Since the late 1960s Israel has been a close ally of the US, the most dominant actor in the international system. Washington provided over the years military, financial, and political support for Israel. Indeed, Israel is the largest recipient of US foreign aid since the Second World War. The two countries’ close relationship does not include a formal treaty of alliance, but both countries signed dozens of agreements that have institutionalized various aspects of the relationship. Israel further maintains close relationships with major European actors, most notably, Germany.

Despite its close relationship with the US, Israel is effective in maintaining close relations also with America’s current global challengers, China, and Russia. The latter is particularly important, as since 2015, Russian forces have been based in Syria and are serving, in effect, as a potential check on Israeli military activity in the region. Israel also experienced improved foreign relations in its immediate environment. Massive gas discoveries in Israel’s Exclusive Economic Zone in the Mediterranean since 1999, serve as a basis for an Israeli “turn to the sea”. Israel developed a close alliance with the Hellenic states of Greece and Cyprus which includes, among other things, military cooperation, and plans for a joint gas pipe from Israel via Greece to Italy, though the plan’s feasibility remains unclear. Egypt also joined this axis, and indeed led the creation of a new regional organization, the EastMed Gas Forum. This is the first regional organization in which Israel took a leadership founding role. Joint concerns about Iran, the decline in the intensity of the Israeli-Palestinian conflict, coupled with pressures from Trump’s Washington, led to closer relationship between Israel and Arab actors that traditionally shied away from it. A portion of these relationship came to the public eye with the fall 2020 Abraham accords, in which Israel embarked on diplomatic relations with the United Arab Emirates (UAE) and Bahrain. This was followed by similar moves with Morocco and Sudan.

Although scholars highlight the significance of domestic factors in shaping Israeli foreign policy, It seems that its democratic makeup is not part of this effect. The Knesset (Israel’s Parliament) is generally left outside of the foreign policy process and does not even have a separate committee for foreign relations. Structurally, Israeli foreign policy making is rather centralized and much of it is handled directly by the Prime Minister and his staff. In the broader bureaucracy, core aspects of foreign relations are led by security organs: the Defense Ministry, Israel’s external intelligence agency, the Mossad, the Israel Defense Force, and the National Security Staff. These institutions are less exposed to public scrutiny compared to other elements of the executive. The foreign ministry, an organ that might have been more open to the public, has been marginalized in the foreign policy process. For example, for most of the years, the top diplomatic positions, such as Israel’s ambassadorships in the US and the UN, were political appointees by the Prime Minister and not professional diplomats. Members of Knesset have small staffs, and for many years, did not have an independent ability to assess information, until a small research center was set up to help them. Civil society also has a limited role in foreign policy. There are very few think tanks that challenge government policy, and the matter has rarely attracted public interest in a way that could lead to collective action. There are a few exceptions, such as activists Eli Yosef and Itai Mack that seek greater transparency, public oversight, and limitations on Israel’s largest export industry – arms. Both activists oppose arms sales to governments that oppress their population. To date, however, these efforts had no substantial effect.

The lack of any major effect of Israel’s democratic make-up on its foreign policy is further a result of Israel’s strategic culture and approach. While diplomacy was central to the early Zionist efforts, the reality of a security challenge, meant that diplomacy had become, in the words of scholar Charles Freilich, “an instrument of defense policy”. As such, much of the strategic considerations are realist, based on raw power, rather than a normative outlook. Israel was willing to support whoever assisted it in its defense. In the 1970s and 1980s, when Israel felt especially isolated in the world, it had cooperated with blatantly non-democratic regimes, such as Apartheid South Africa, Pinochet’s Chile, and Argentina under the Junta. Cooperating with these autocracies was justified by another feature of Israel’s foreign policy: its commitment to world Jewry. Argentina and South Africa had sizable Jewish communities, and their governments had a history of antisemitism. The rationale in Jerusalem was, therefore, that closer relations with these governments will allow Israel to better protect local Jews.

Even if one underplays the role of security in shaping foreign policy, Israeli diplomacy was driven by the need to work with whoever was willing to do so. Uri Bialer argued recently that the “supreme goal” of Israel’s foreign policy was to “build a state and secure its existence”. Under these conditions, normative considerations of advancing democracy, or including morality in foreign policy, were marginalized.

What is the effect of the interaction with other democracies on Israeli policies? The pre-state Zionist movement and the state it beget have been highly sensitive to the positions taken by its great power democratic allies. This contributed to an Israeli commitment to democracy. In 1953, David Ben Gurion, said that “Israel historically, culturally and spiritually [is] part of the free world.” In the 1950s and 1960s Israel devoted many resources to supporting young African nations in their newly created free states. Yet, by the 1970s this streak of Israeli “norms-based” foreign policy, retreated. In part, as Israelis were disappointed with the behavior of African nations, who swiftly cut diplomatic relations with it under Arab threats and promises between 1967 and 1973. Israel also learned that its foreign relations were affected much more by material capabilities, as opposed to normative preferences. Only once it demonstrated its military prowess after the 1967 war, and in light of Soviet support to its Arab foes, did the US launch into a closer relationship. More recently Israel scored progress with a number of Arab states, based on its military and political power, and its strong posture against Iran. Beyond the internal drive for a democratic procedure, the pattern could also be understood as stemming from external power relations. When the Zionist movement and then Israel were weak, they sought support from the international system. As the international system was led by democratic countries and values, Israel highlighted its commitment to liberal democracy. Once Israel had become stronger, it could rely more on material capabilities to attract allies, and it was its foes — mostly the Palestinians – who needed secure international support and turned to liberal-democratic arguments in doing so.