Biden’s America Is Returning to the Red Sea Basin 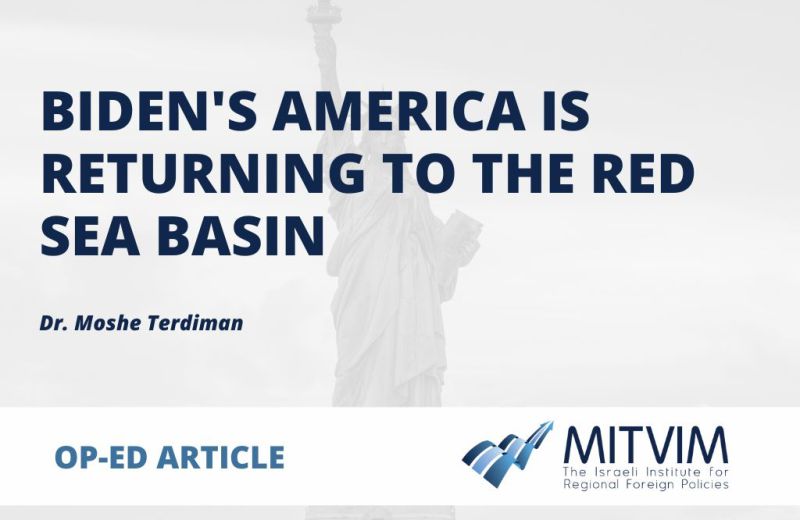 Much has been said about U.S. President Joe Biden’s visit to Israel and Saudi Arabia this week in the context of the war in Ukraine and the preservation of the United States’ standing in the Middle East. However, the visit has another goal that has not received any attention: To restore U.S. influence in one of the world’s most important trade routes, the Red Sea Basin, and in several of the key countries along its shores – which it lost to Russia and China over the past 18 months.

The United States has lost influence in Ethiopia, Africa’s second-most populous country and seat of the African Union, whose Prime Minister Abiy Ahmed overnight went from being a Nobel Peace Prize laureate and Washington darling to the target of U.S. condemnation and sanctions. This turnaround stemmed from the U.S.’ decision to side with Egypt and Sudan against Ethiopia over the issue of the Renaissance Dam on the Blue Nile – the largest hydroelectric plant in Africa, which seriously threatens Egypt’s water, food and economic security.

This was compounded by U.S. demands that the Ethiopian government end its raging civil war and cease the human rights violations that led to its November 2021 ouster from the African Growth and Opportunity Act (an important trade agreement aimed at helping African economies and improving their economic ties with the United States).

Against this backdrop, Ethiopia tightened its diplomatic relations with Russia, signing a military cooperation agreement with it and receiving strategic weapons for the defense of the Renaissance Dam. Prime Minister Ahmed was also assisted by drones from China to bomb the Tigrayans and their allies who are threatening his rule.

Sudan, meanwhile, was driven into Russia’s arms after the October 2021 coup led by Abdel Fattah al-Burhan, president of the provisional Sovereignty Council, against his civilian government partner. That prompted U.S. and Western opposition, and the suspension of $700 million in U.S. aid to the country. Gen. Mohamed Hamdan Dagalo (widely known as Hemeti), al-Burhan’s deputy, visited Moscow on February 24 – the day Russia launched its invasion of Ukraine – and publicly expressed support for Russia’s right to protect its citizens in Ukraine’s separatist regions.

It is therefore possible that under these circumstances, Russian attempts to advance a deal for a 25-year lease of territory on the Sudanese coast to establish a logistics base there – which have so far been successfully torpedoed by the Americans – will eventually succeed.

Eritrea was pushed into China’s and Russia’s embrace after the United States imposed sanctions on the Eritrean army, the country’s ruling party and two senior government officials in November 2021, over the involvement of the Eritrean army in the Ethiopian civil war. As a result, Eritrea joined the Chinese Belt and Road Initiative that same month.

The visit of Chinese Foreign Minister Wang Yi to the country last January resulted in a $15.7-million pledge of Chinese aid and an expression of Chinese readiness to develop Eritrea’s coast.

Eritrea was also the only African country to publicly side with Russia on Ukraine, voting against the March 2 UN General Assembly resolution demanding that Russia immediately cease its military activity there. Contacts are currently underway between Russia and Eritrea to establish a Russian logistics base off the coast of Eritrea.

China attaches great importance to the Horn of Africa, and has been promoting its status as a major player and conflict-resolution mediator within and between the countries of the region.

In January, Wang made his first visit of the year to countries on the Horn of Africa and East Africa. During this round of visits, he announced China’s readiness to raise the “Peaceful Development Initiative in the Horn of Africa,” and to support the region’s countries in tackling the trilateral challenges of security, development and governance.

In the security sphere, he suggested that the region hold a conference with in-depth discussions on peace in the Horn of Africa, reach a political consensus and coordinate joint actions.

In terms of development, he proposed expanding the railroads connecting the Kenyan port city of Mombasa with the capital, Nairobi, and the state of Djibouti with Ethiopia’s capital, Addis Ababa. He also suggested accelerating the development of the Red Sea and East African coasts.

At the governmental level, meanwhile, he proposed that ethnic, religious and regional conflicts be resolved in a way that would create a unified, stable and harmonious development environment in the Horn of Africa.

Last February, the Chinese government appointed senior diplomat Xue Bing as the country’s special envoy to the Horn of Africa, supporting its initiatives in the region. And last month, China held the first China-Africa Security, Governance and Development Conference, in Addis Ababa. During the event, Xue offered his mediation services for peaceful conflict resolution in the region and declared China’s readiness to support food security, agricultural, transportation, trade promotion and capacity building projects.

In light of these developments, and in an attempt to curb the spread of Chinese and Russian presence and influence in the region, the United States is taking two parallel steps in the southern and northern Red Sea.

Last May, immediately after the election of Hassan Sheikh Mohamud as president of Somalia, the White House announced it would be redeploying 450 to 500 U.S. troops in the country, to advise and assist Somali forces in their war against the Al-Shabaab terrorist organization (after the Trump administration withdrew U.S. forces from Somalia in 2020). The timing of the move was apparently dictated by Sheikh Mohamud’s cool relations with the president of Eritrea and prime minister of Ethiopia, both allies of China and Russia.

At the same time, the United States is investing considerable efforts in negotiations on ratifying the agreement between Israel, Egypt and Saudi Arabia for the return of the islands of Tiran and Sanafir from Egypt to Saudi Arabia, with a Saudi commitment to ensure the freedom of navigation of Israeli ships in the region. In return, Saudi Arabia will agree to the passage of Israeli flights over its territory to the Far East, and may also allow direct flights from Tel Aviv for Arab Israelis to pilgrimage in Mecca.

A number of developments on the eastern and northern sides of the Red Sea in the past two years have made it possible for the Biden administration to take these steps. The 2020 signing of the Abraham Accords between Israel and the United Arab Emirates, Bahrain and Sudan, with the approval and support of Saudi Arabia, has made it possible to bring Israel into the Red Sea Basin as a partner in an emerging Middle East alliance. And the Gulf reconciliation agreement signed on January 5, 2021, which ended a three-and-a-half-year rift between Qatar and its ally Turkey, and Saudi Arabia, Bahrain, the UAE and Egypt, has brought all these countries closer together.

This rapprochement allows the United States to promote a regional security alliance. The U.S. Army’s transfer of Israel from the responsibility of the European Command to Central Command in January 2021 has facilitated military cooperation between Israel and other countries under that command. In November 2021, the naval forces of Israel, the UAE, Bahrain and U.S. Central Command held a joint naval exercise in the Red Sea simulating a clash with Iran. And last month, a secret meeting was held in Sharm el-Sheikh between Israel Defense Forces Chief of Staff Lt. Gen. Aviv Kochavi and his Saudi counterpart, and between senior IDF officers and their counterparts from the armies of Qatar, Egypt, Jordan, the UAE and Bahrain.

Finally, the cease-fire in Yemen, which is now entering its fourth month, allows the Biden administration to take these steps without facing domestic and external criticism of its cooperation with Saudi Arabia.

This U.S. activity contributes to restoring influence in the Red Sea Basin and to the continued construction of a new geopolitical space that extends from India to France, crossing through the Gulf states, the northern Red Sea, and the eastern Mediterranean Basin.

There is no doubt that this American activity also raises the importance of the Red Sea Basin in Israel’s eyes – not only in terms of security, as part of its commitment to ensuring freedom of navigation against Iranian threats, but also politically and in terms of the potential it holds for environmental and economic cooperation.

The op-ed was published in Haaretz in July 2022.