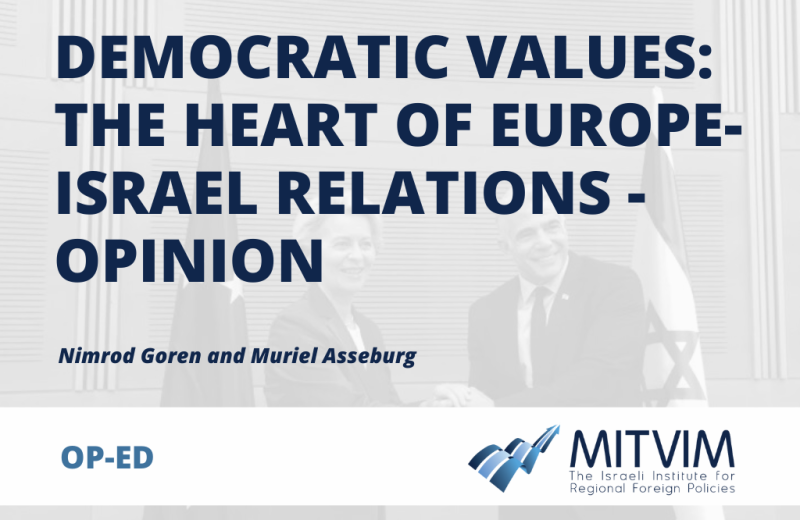 The strongest bond that Europe and Israel share “is our belief in democracy and in democratic values,” said president of the European Commission Ursula von der Leyen in her speech at Ben-Gurion University in Israel on June 14. “Today, more than ever before,” she continued, “democracies like Europe and Israel should come closer together” to address external threats, as well as threats from within, in particular “the risk of backsliding that all our democracies face.”

Indeed, the last decade has witnessed a global trend of democratic backsliding. An array of populist and illiberal forces, and leaders has called into question and, in some countries, actively dismantled key institutions of liberal democracy, such as independent judiciaries and civil liberties.

What is more, the liberal international order has been under attack, not only by those who seek an adjustment of its governing institutions and rules for today’s balance of power but also by those who challenge its very foundations of international law and multilateralism.

This global trend has not spared Europe and Israel: right-wing populism has made inroads, liberal democratic values have been questioned, discourses focused on ethno-national identity and security have gained popular support, and official historiography has been politicized in the service of identity, sovereignty and security.

Democratic backsliding has also taken a toll on Israel-Europe relations, as alliances were formed – during the years of Netanyahu as prime minister – between populist and illiberal right-wing Israeli and European leaders, around shared interests in weakening the EU and in fostering divisions among member states.

Pro-democracy Europeans and Israelis – some of whom have reached positions in government over the last couple of years – have been trying to respond. But so far, they have done so in a limited and rather ad-hoc manner.

And the risk of further democratic backsliding is by no means banned: Israel is headed towards an election that might well bring to power a governing coalition dominated by the right-wing and incorporating extremist elements of the far-right. The war in Ukraine and sanctions on Russia are likely to have massive socio-economic repercussions, fuel social strife and empower populist forces in Europe.

Progressive Europeans and Israelis should therefore join forces to jointly stop and reverse democratic setbacks, and strengthen liberal democracy. In that context, Europeans should, in their endeavor to strengthen ties with Israel, emphasize the relevance of strengthening Israeli democracy rather than turning a blind eye to domestic developments.

That should include intervening in case an Israeli government advances (de jure or de facto) annexation or anti-democratic legislation, and actively supports pro-democracy steps advanced by the Israeli leadership. In line with its more-for-more approach, the EU should spell out concrete positive benefits of democratic enhancement and negative consequences of democratic setbacks. Israelis should, in turn, go beyond purely pragmatic and transactional foreign policies emphasizing their interest in strengthening liberal democracy in Europe, rather than allying with non-liberal forces.

Europeans should also highlight the interrelation between democracy, peacemaking and shared society – for without a resolution of the Israeli-Palestinian conflict and equality between Israel’s Jewish and Arab/Palestinian citizens, Israel will continue to suffer from a democratic deficit. Europeans should therefore seek a more active and effective role in efforts to advance Israeli-Palestinian peacemaking, not least as a means of supporting Israel’s democracy.

Even as hurdles are mounting on the way towards a two state solution and as more pressing issues dominate the European agenda, Europeans should increase their pro-peace engagement in a way that overcomes internal European divisions and addresses the real needs of both sides to the conflict, and cooperate with like-minded international actors.

They should also explore the potential inherent in the Abraham Accords to strengthen Israeli-Palestinian peacemaking and support constructive steps in that regard. At the same time, they should try to mitigate negative side-effects of Israeli-Arab normalization on the Israeli-Palestinian arena and beyond.

Last but not least, to play an effective role in peacemaking, the EU will need to improve its image in Israeli society. It will thus have to invest greater efforts in public diplomacy, communicating its positions and the reasoning that underlies them to the wider Israeli public.

This is also about – mutually – empowering pro-democracy actors. European parliamentarians and officials should regularly meet with pro-democracy actors, when they visit Israel and they should showcase their work by inviting them to speak at conferences, mention them in speeches and on social media, and act as their champions in Europe. A regular forum, convening high-level EU officials with Israeli pro-democracy actors could serve as an additional empowerment tool.

Israeli civil society organizations working to advance liberal democracy often lack institutional capacity to bring about the change to which they aspire. They need additional resources and financial support. Europe, being a key donor on democracy issues, can expand and diversify its funding schemes.

Funding should be made more easily accessible to new, small and innovative initiatives, in parallel to continued support for well-established organizations that effectively promote long-term positive change.

But this is not only about funds: Pro-democracy actors in Israel, such as organizations promoting shared society, Israeli-Palestinian peace and human rights, have been under pressure from the right-wing. The EU and its member states should uphold their funding for these organizations, back them politically and refrain from enforcing on them inappropriate conditionality.

At the same time, progressive Israelis should help strengthen pro-democracy actors in Europe, in particular those working to confront illiberal tendencies and replace populist leaders. This should include support by Israeli progressives for maintaining space for constructive, diverse debates in Europe on the Israeli-Palestinian conflict.

Liberal democracy at the center of relations

Europeans and Israelis can also work together to strengthen their bilateral relations based on liberal-democratic values and they can do so by setting a new agenda. In March, the EU decided to extend its Action Plan with Israel, adopted in 2005, for another three years, to “give the parties the opportunity to take forward their cooperation for the coming years, including through the possible negotiation of partnership priorities.”

This step – together with the new EU Agenda for the Mediterranean adopted in April, 2021 – should be leveraged to chart new paths for Israel-EU cooperation, based on the pillars of democracy and peace. If new priorities are set, new implementation mechanisms put in place, new resources allocated and new actors mobilized – all with a focus on advancing cooperation on liberal democratic values – Israel-Europe bilateral relations will be on a better track moving forward.

That also means not to let security dominate ties between the two entities. While the war in Ukraine is likely to enhance security as a strong feature of Israeli-European cooperation, it should be done in a way that strengthens rather than compromises liberal democratic values.

Cooperation on science, education, environment, tourism and culture should therefore be prioritized by maximizing Israeli-European civilian cooperation through programs like Horizon Europe, Creative Europe and Erasmus+, which include territorial clauses that ensure that European funds are not diverted to settlements in occupied Palestinian territories.

A concentrated Israeli-European effort that puts liberal democracy at the heart of the relationship and empowers pro-democracy actors should be the way forward in Israel-Europe relations.